by gbaskerville | Feb 13, 2022 | Christians and Divorce, Divorce Bible Verses, Focus on the Family, For Pastors

Did you know Focus on the Family uses three methods to manipulate wives to stay in their abusive, addicted, or sexually immoral relationships?

1.  They tell the wife, "God hates divorce in every case." (Even though the Bible doesn't say that)

3.  They tell her that divorce universally destroys children. (Even though researchers know that exposure to abuse, addictions, anti-social or criminal behavior, etc., is worse for kids.)

1.   They tell the wife, "God hates divorce in every case." (Even though the Bible doesn't say that) 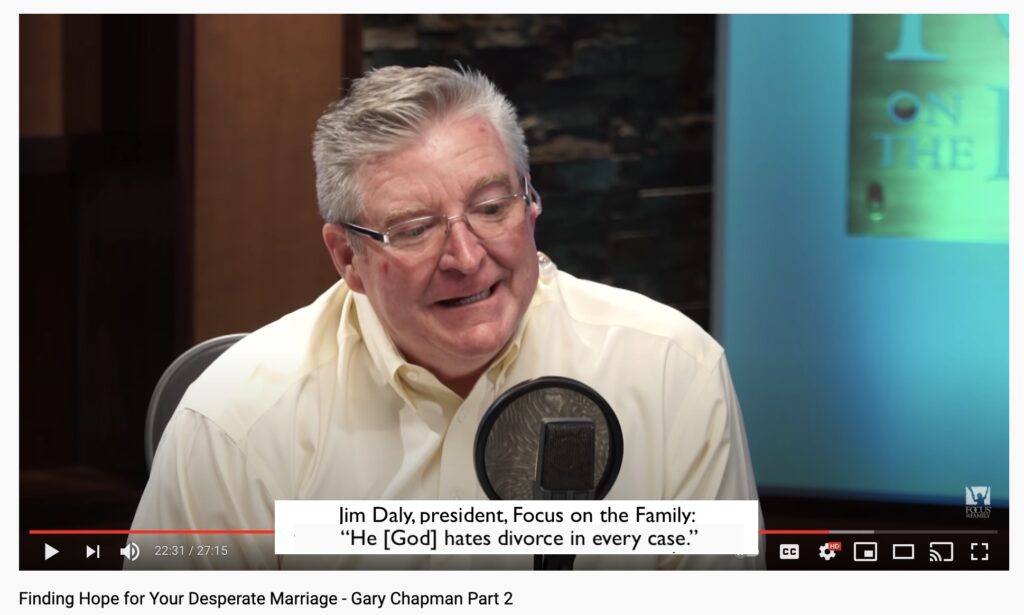 The president of Focus, Jim Daly, adds words in the Bible, making it unacceptable for wives of abusers, cheaters, and pedophiles to divorce

The president of Focus on the Family, Jim Daly, states in a major 2019 public video for people in desperate marriages that "God hates divorce in every case."

This is tragic because a desperate marriage probably involves abuse or adultery or child molestation or family-crushing addictions. God loves his children. He doesn't want them treated this way. The Bible never says God hates divorce in every case. In fact, the Bible commands us to get away from these destructive people, to not associate with them, not even to eat with them.

But here is the president of Focus on the Family telling abused Christians that God disapproves of all divorces. (He's wrong! There are Bible verses that condone divorce for sexual immorality, neglect, abuse, and abandonment.)

In one Focus on the Family YouTube video, "Finding Hope for Your Destructive Marriage - Gary Chapman, Part 2," at minute 22:31, Jim Daly admits that Jesus said divorce was acceptable for adultery, yet Daly claims to know "the heart of God on the matter," suggesting that people who divorce don't care about God's heart.  No wonder so many godly people who call Focus on the Family's crisis line are suicidal. They feel trapped for life with a cruel spouse because leaving means God will hate them.

Every Sunday we Christians pray that the Lord will "deliver us from evil." God is not mocked. God is a rescuing God who loves us and saves the lives of his precious children.

For more on Focus on the Family and their weird views on divorce (including Jim's desire to make divorce legally harder to get in the U.S., with no exceptions for domestic violence, adultery or even pedophilia), read www.lifesavingdivorce.com/fotfdivorce

These types of suggestions are found on their broadcasts, blog posts, books, and their Hope Restored marriage intensive program.

3.  They tell her that divorce universally destroys children. (Even though researchers know that exposure to physical, sexual, and psychological abuse, drugs, alcoholism, criminal behavior, etc., is worse for kids than divorce).

Focus on the Family pretends to be scientific and reliable, but every one of their blog posts on the topic of kids and divorce is misleading. I've sadly had to conclude it must be deliberate. In two articles they mention all the top researchers .... but they omit and distort those researchers' findings. And in another article, multiple times they either misinterpret scientists' conclusions or leave out words from quotes that completely change the meaning to agree with Focus's inaccurate views.

1. Focus on the Family doesn't tell you that 30 years of research shows that divorce is actually good for kids, on average, where there is abuse, high distress, or high conflict. Nor do they tell you that divorce resulted in 10 times better wellbeing for children in very high-conflict homes compared to children whose parents stayed. (Amato, see http://www.lifesavingdivorce.com/abuse-and-kids)

2. Focus doesn't tell you that abuse and deception are so destructive to kids, that living 24/7 with a father who displays 3 or more anti-social traits increases the child's likelihood of developing conduct disorders themselves. (Jaffee, see http://www.lifesavingdivorce.com/Jaffee).

3. Focus doesn't tell you that children who experienced physical, emotional, or sexual abuse, or observed abuse, or lived in a home with substance abuse, mental illness, or criminality, were found to have a higher likelihood of serious health problems in adulthood. (Felitti, ACE Study 1998, see http://www.lifesavingdivorce.com/abuse-and-kids).

4. Focus on the Family quotes Dr. Judith Wallerstein, who wrote the book The Unexpected Legacy of Divorce, and suggests that she found divorce to be really bad for kids. They don’t tell you that she was in favor of divorce in cases of hostile or violent marriages, and said that 7 in 10 children of divorce turned out “average” or “very well or outstanding.” She told abused spouses not to "stay for the kids." (http://www.lifesavingdivorce.com/wallerstein)

5. Focus on the Family doesn’t tell you that most children in abusive homes are relieved when their nurturing parent gets away from the destruction, tension, and chaos through divorce. I don’t have a scientific study for this claim, but I did a poll in my 3,000-member private Facebook group (http://www.facebook.com/groups/lifesavingdivorce), and more than 8 in 10 respondents said at least one of their children was glad they got divorced. 1 in 10 were opposed to the divorce, and 1 in 10 parents said they had never asked their children.

Not convinced?  Okay.  How about Focus on the Family's Bizarre Stance on Pedophiles?

PEDOPHILIA: Focus on the Family discourages divorce if the husband is caught molesting children in your home. It's unbelievable. Here is a critique of their article on "Pedophilia in Marriage" where Focus says, "God hates divorce, " but NEVER says, "God hates child sexual abuse." And in that article, they never mention that sexual immorality is grounds for biblical divorce according to Jesus' words in Matthew 19:9. Whose side are they on? The pedophile's! Certainly not the child or wife's!

As I mentioned above, the president of Focus, Jim Daly publicly said he wanted to make divorce legally harder to obtain, and gave no exception for abused wives or for the wives of serial cheaters or pedophiles.

Ex-wives of pedophiles tell me they had called Focus on the Family with their story of a child-molesting husband. Some were not advised to leave, like this young mother of three who was married to a batterer and child rapist.  https://youtu.be/FBITqZRfETU Sometimes their phone counselors do tell physically abused wives to "leave," "get to safety," or "separate," but they say that it is temporary and that reconciliation is the goal.

Focus Advertisement Says $30 Can Save A Marriage From Divorce!

But they can't even fix couples who are willing to spend $6,000 at their marriage intensives

This horizontal banner advertisement (below) says: "Broken Couples need your help! STOP DIVORCE! Just $30 can save a marriage from divorce." It appeared on the Merriam-Webster Dictionary website, not on their own site. (Focus on the Family is spending their donor's money to pay for these advertisements.) The wording suggests that saving a marriage from divorce is easy, just a simple matter of $30.

Is this couple broken as they suggest — or is one of them involved in marriage-destroying sin that is breaking the marriage? Look at the photo of the couple. We have no context.

Is this couple having a momentary spat, or is this a long miserable marriage because she's caught him having yet another affair, or he's caught her stealing family money for drugs. We don't know what's happening.

Our natural tendency is to see it as just a spat: we "mutualize" the problems and assume it's no big deal. After all, Focus suggests that this marriage can be saved for $30, so how bad can it be? In other words, without the backstory, we might view these two people as immature and irritable — having a dust-up over nothing. This ad makes us want to say to the couple, "Hey, just snap out of it."

Your $30 won't stop a cheater from cheating, or an abuser from abusing, or an addict from substance abuse, or the egotist from squandering family money and other resources to feed their selfish desires.  Half of U.S. divorces are for serious issues such as adultery, abuse, addictions, and severe indifference or neglect.  And Focus on the Family is incapable of fixing any of these situations. Their $6,000 marriage intensives cannot cure an addict, abuser, or cheater. See three wives who tell their stories at the bottom of this article.

But—we don't know who is doing what to whom.  Is one offending and the other reacting?

If there's adultery, abuse, addictions, and indifference in the marriage, the TRUTH is that DIVORCE may rescue the invested spouse from injury, sexually transmitted disease, financial ruin, depression and even homicide. A Harvard University journal has an article showing that DIVORCE SAVES LIVES: It reduces suicide, domestic violence, and homicide. www.lifesavingdivorce.com/divorcesaveslives

Horizontal banner ad from Focus on the Family February 2022 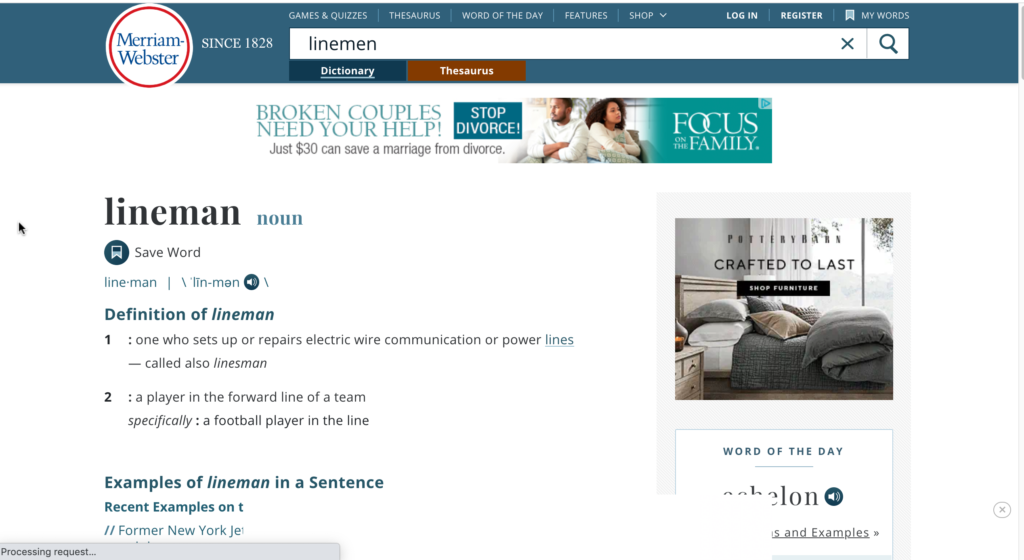 Here's how Focus on Family's ad looks on other websites. In this case Merriam-Webster's.

Focus on the Family is UNSAFE for married Christian abuse/betrayal victims.

About Me: If you're new to my blog, read this. I'm a committed Evangelical Christian. I have donated thousands of dollars to Focus, have recommended their books to friends, and have listened to hours of Focus radio broadcasts. I have visited their headquarters and have attended Christian conferences there. And I love their bookstore. My purpose is to encourage Focus to change the children-and-divorce articles and divorce doctrine articles on their website because their ideology is killing people.

I believe that God gave divorce as protection for women and men in the Bible. Here's my blog post and video on that.