One Woman’s Story: Adultery, Prayer and the Bible 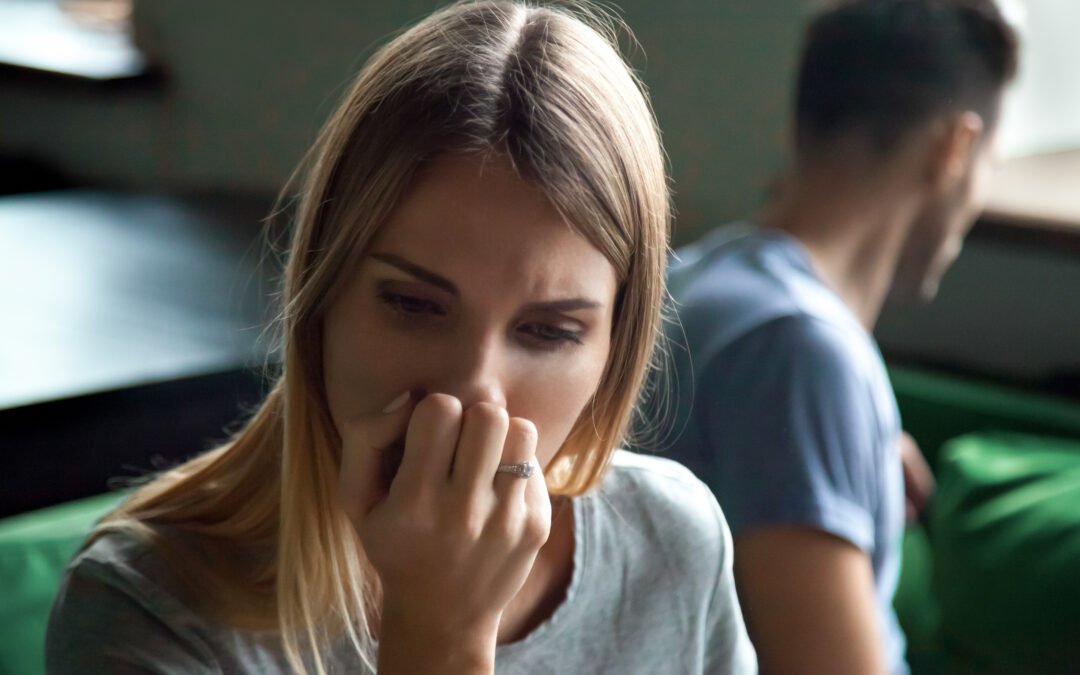 Have you ever been told that "you just need to pray more about your difficult marriage"? Yet you've been praying for a long time. You've tried hard, you've cried out to the Lord, you've got faith, you've read your Bible, you've tried being nicer or more submissive, but your destructive marriage doesn't improve—at least not for more than a few weeks or months.

Here is the story of a mother with four children. When she and her husband got married he had just accepted Christ. They were very involved in church and the leaders saw potential in him. But when he joined the military and they moved to a new base, her husband started having affairs. She tried to reason with him. She prayed and called out to the Lord. She tried submitting more and pleasing him more, becoming a doormat and giving into his every preference. That one affair became multiple affairs over their ten-year marriage, but she loved him and forgave over and over. She just wanted a good Christian marriage and she was willing to do anything to achieve that.

[Finally my husband] moved out, and for the next several years I tried everything to win him back. We had pastoral counseling because I believed God hated divorce, and I refused to give up on the marriage.

Our pastor interviewed us separately and finally told me, “This man is determined to leave; let him go.” That’s not what I wanted to hear. I wanted the pastor to fix him. I wanted my husband to be changed magically. I wanted him to come back to me and to God. I was destroyed.

To make matters worse, my husband found a fourth woman [after his previous three affairs] and moved into her house right across the street from us. Every morning the kids and I could see him kissing her and going off to work. It devastated me. At the same time, he was coming over, hanging out with the kids, and occasionally acting as if he wanted to reconcile.

I was in a fog of confusion. I didn’t know what was happening. He said we would get back together soon, in time for our upcoming tenth anniversary. I wanted to believe him and took any positive comment or act of kindness as a sign of hope. He just kept stringing me along, and I fell for it.

This made me literally insane. I gave up hope and figured out a way to kill myself. I didn’t want to leave a note. I wanted it to look like an accident and planned it carefully. The day I decided to die, just as I was walking out the door, my three-year-old daughter said, “Mommy, you’re not going to leave like Daddy, are you?” That stopped me in my tracks. How could I abandon her? I turned around, went back into the house, and knew I had to stay alive for my children.

The counselor asked me every week, “Is your marriage over?” (It was obvious to everyone else but me.) Each time I said no. I kept hanging on.

One evening, I went to pick up the kids from his house. His girlfriend and my daughter were playing on the bed. Suddenly the truth hit me: My husband is sleeping with this woman. They are living together. I shook myself, asking, “What am I doing?”

Later I went for a drive. I needed to be alone and pray. I felt an overwhelming need to pull over and let God overcome me. I felt the Holy Spirit free me from the spiritual obligation to continue trying to save my marriage.

I knew God hated divorce, but I also knew God had taken the burden off my shoulders. I was free and felt God’s blessing. The next week I found a paralegal and filed for divorce.

When you’re focused on holding a marriage together, you don’t realize how that desire overcomes rational thought and can become an obsession.

This dear woman had a high school education and a few college credits, yet she went on to raise her children virtually alone. Her husband paid less than $500 a year (yes, per year, not per month) in child support, but she was happy to finally be at peace, even though money was a struggle for many years.

She went on to start a ministry in her church to other mothers who were bringing up kids by themselves. She finished her college degree, and she got a better paying job and finally got financially stable.

Years later, when her children were grown, she married a wonderful man who truly loved her.

"I have no regrets," she said, "God was always faithful to me and my children."

Why Did She Stay for So Long?

Pastors and Christian leaders ask me, "Why do people stay so long with such terrible adulterous or abusive spouses?"

My reply is, "Because you told them to."

You told her that God could heal her marriage. You told her to try harder. You told her if she divorced she was just a quitter who took the easy way out. I know you didn't mean to say that to situations like hers, but that's how she heard it. She wants to please God, and she trusts you speak for God.

Let's examine this myth that a godly spouse who prays enough is capable of saving the marriage singlehandedly, even if the other spouse refuses to invest in the marriage.

Myth: God Will Heal Your Marriage If You Pray Enough

Many women have been influenced by a Christian book called Lies Women Believe,[1] in which the author makes this comment: “There is no marriage God cannot heal. There is no person God cannot change.”[2]

The author's statement is partially true: God can do anything! Nothing is too big for God. God is a powerful God. But that’s not the message she is giving.

Her real message is that if you are hurt by your spouse and justify your decision to divorce, you have a hard heart and you've “fallen into the Deceiver's trap and have been ensnared by his deception.”  (If you don't believe me, see it in context.) 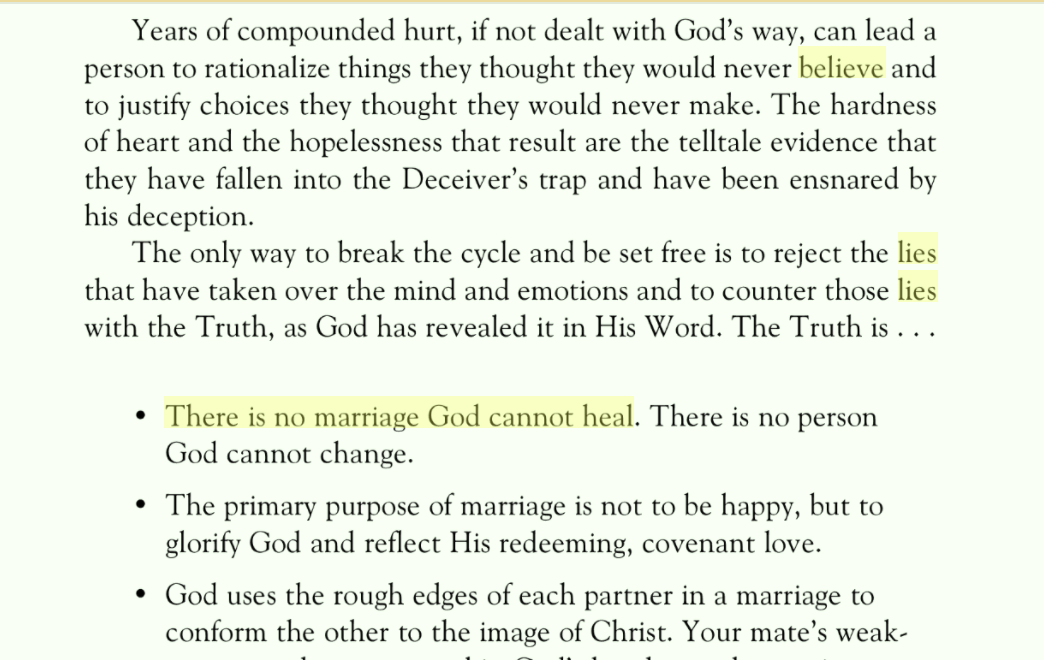 Does God heal some marriages?

Of course! We see some marriages improve. Some spouses do get better at communicating and working in tandem. But anyone who has been in ministry for years, like the experienced pastor and the counselor in the story, know how rare it is for a serial adulterer to change.

If you are like me, you believe in a God of miracles. I’ve seen miracles. My own mother had a miraculous healing when I was a teenager.

But the implication that God will heal every time if you are faithful enough is wrong.

Will God Magically Fix My Marriage?

My parents had elderly friends at our church who were an amazing, born-again Christian couple. They were loving and volunteered for everything at church. They were loving believers and were devoted to prayer. They were wonderful models of Christian living and sacrificed their time and effort for others. They had no children, so they gave all their money to Christian causes.

The husband got very ill, and the church gathered to pray for him. The pastor and elders laid hands on him. The couple traveled to a revival where a faith healer invited people to come forward for healing.

Many people claimed to be cured, but our elderly friend wasn’t. They were told they didn’t have enough faith, that there must be hidden sin, and they hadn’t given enough money.

They were devastated and wondered what they did wrong.

They prayed, examined their lives, and went over and over to the revival meetings, but he still wasn’t healed. It was painful to watch this devout couple beating themselves up.

This story shows a toxic misunderstanding of God and his power, and it’s a shame these dear saints suffered from this false teaching.

In John 9, Jesus corrected this lie. His disciples asked him why a certain man had been born blind. Was it because of the man’s sin, or his parents’ sin? Jesus said, “Neither.”

Some troubles that afflict us and some challenges that we face are not punishments for our sin that God will remove and heal as soon as we repent. The entire book of Job also addresses this question. Job was accused by his friends of having some secret sin, but he maintained his innocence. In the end of the book, God tells Job’s judgmental buddies that they were wrong (Job 42:7-9).

The Prosperity Gospel and Marriage

In the story above, I showed the difference between Jesus’ teachings and the prosperity gospel mindset.

Jesus rejected this false belief. He taught that bad things happened to good people. The Bible says that God “sends rain on the righteous and the unrighteous” (Matthew 5:45, NIV). Sure, there is a principle of reaping and sowing, but that doesn’t mean only good people get rich, and only bad, lazy people get poor. We all know godly people who are poor and evil people who are rich.

Just because some people say they were healed doesn’t mean all people will be healed. Don’t be like the false faith healers who say you’re doing something wrong if God doesn’t heal your marriage right now.

Unanswered prayers may not mean you don’t have faith in God. You just don’t have the answers yet. And you may never know the whys in this life. But you can be sure God weeps with you, and he is growing in you the courage to protect yourself and your children.

* This is an excerpt from the book, The Life-Saving Divorce: Hope for People Leaving Destructive Relationships. It gives hope and support to people who love God and need to exit their destructive marriage.

If you need a little care and encouragement as you, or a friend, go through divorce, please sign up for the FREE Life-Saving Tips email list here (you can unsubscribe at any time).