Turning Point 4: Help! I Am Alone with the Abuser 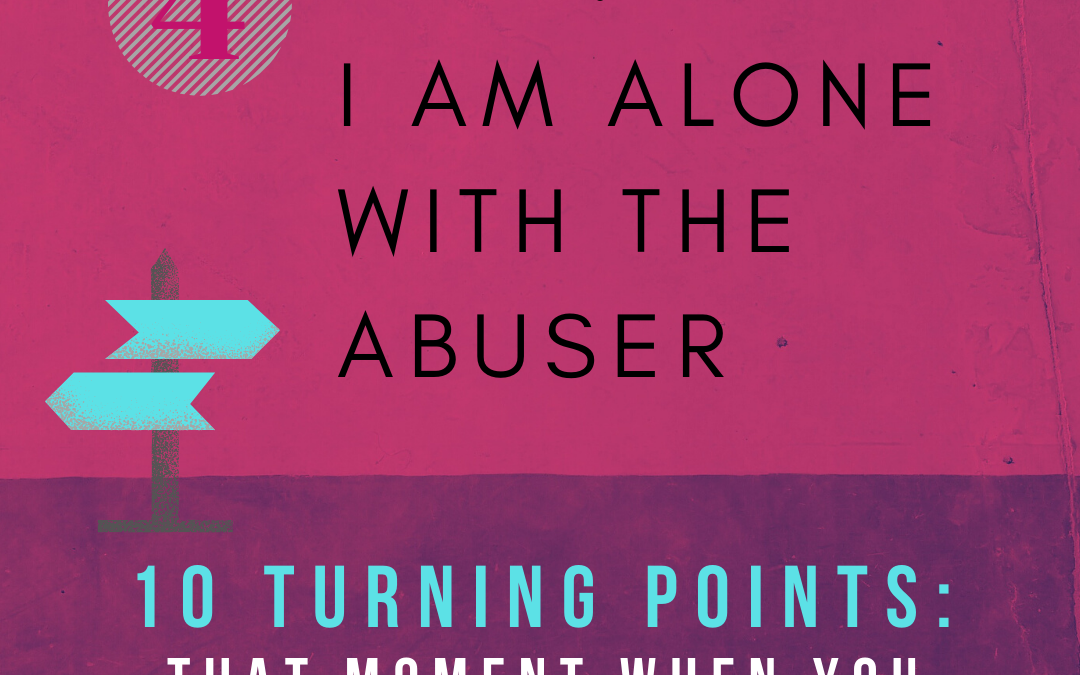 Turning Point 4:  Help! I Am Alone with the Abuser (Retirement or Sheltering-in-Place)
Note about this "10 Turning Points" Series: A turning point is that eye-opening moment when you know you must get out of your marriage to save your life and sanity, and your children's. This series is based on my 20 years' experience as a Christian divorce recovery leader, and on interviews of Christians who love God, take their beliefs seriously, yet finally divorced. They hung on longer and tried harder than most people would have. They were in marriages where there was a pattern of adultery, sexual immorality, domestic violence, chronic emotional or verbal abuse, abandonment, or neglect due to addictions. These are the Life-Saving Divorces.
You can love God AND get a divorce.
And God will still love you. Really.

Why Do So Many Retirees and People in Long Marriages Get a Gray Divorce?

Accountants wonder why elderly couples would divorce just when they need to cut costs, and conserve every dime for their retirement years. But my interviews reveal one of the reasons. Empty nesters wake up to discover that the kids have flown the nest, and now they are trapped with someone who is not on their side. Up until now, the children had been distractions in the home. They were also witnesses to what was happening.

In this post we find the story of a woman who decided to divorce a her husband of 30 years who seethed with hatred for her.

Once the kids left, the spouse realized they were alone with a person who treated them with disdain—sometimes feeling trapped in a house with someone indifferent as to whether they live or die—and they finally realize, “I can’t live the rest of my life with this person.”

As Baby Boomers come into their retirement years, news stories about “Gray Divorce” have popped up everywhere. Roughly 1 in 4 divorces in 2010 occurred to persons aged 50 and older. And the gray divorce rate is expected to rise,[1] even though the overall U.S. divorce rate has dropped and is expected to continue to drop.

These Boomer couples frequently divorce after long marriages: twenty-five or thirty years, often telling the researchers about a breaking of marital promises, not usually boredom or unfulfillment. In addition to infidelity and mental health issues, women’s reasons included: addictions to alcohol, drugs and pornography; and verbal and emotional abuse. “[T]hey frequently endured years of this treatment—desperately hoping for change—before finally pulling the plug on their marriages.”[2]

In addition to infidelity and mental health issues, men pointed to their wives’ excessive spending and not working, and disagreements on how to treat their adult children.[3] Loneliness and economic instability seem to be the biggest challenges after a grey divorce.

When I interviewed people of faith who divorced over age 50, I saw men and women who endured infidelity and abuse for decades, “for the sake of the children.”

Why didn’t they divorce earlier? Because of the messages they got in church, and because, in most cases, they were so busy caring for their children that they lived in a distracted fog, running at a hectic pace for years, unable to stop and identify the abuse.

They knew something was off, but they couldn’t place it.

In this woman’s story, as she and her husband became empty-nesters and downsized, she realized that the man who told her he loved her every day in reality had disdain and contempt for her.

I was a shell of a person by this point, but we moved to a different house when the last kid left, downsized, and I really noticed it when the kids left. We had homeschooled, and I had no idea what an emotional buffer they were.

Without kids providing emotional zest and distraction, the emotional barrenness of the relationship became starkly apparent.

My husband’s disdain and contempt became impossible to overlook.

So when you hear a pastor claim you have a .03% chance of getting divorced if these things are present in your life, well, I’ll let you know that I’m the .03%. He looked so morally good and respectable; he was an elder in the church.

I did not realize that he had started a smear campaign behind my back for years. My daughter said, “Mom, Dad so undermined, devalued, and invalidated you our whole growing up that if we hadn’t homeschooled, I don’t think we would’ve given you any credence.”

I had no idea I was sleeping with the enemy.

It seems in retrospect he did everything he could to make me leave the marriage he didn’t want and then blamed me for divorcing him. He told me how miserable he was, but he would “never go through the public humiliation of a divorce.”

When he was able to present himself as the victim of a crazy wife, I got to bear the shame and blame while he received sympathy [thanks to] the smear campaign I did not realize he had been waging for many years to our children, family, church, and community… This man is so smooth. I don’t know how to describe it to you…

[Now] I feel far less lonely than when I was married. There’s something horrible about living every day with someone who has contempt for you.

As an interviewer, I was surprised how many stories I heard like this. It is more common than you might think to have an abusive spouse who frequently proclaims their undying love. When we get to Turning Point 10, you’ll hear from a missionary wife married to a serial cheater who told her literally fifty times a day he loved her (p. 196-197). It is part of the masquerade to cover up their true identity and behavior behind the scenes.

But when the kids have left home, sometimes the mask slides off, and the truth is revealed.

Some empty nesters use their newfound freedom to go to counseling and get better at problem-solving and conflict management. For some people, this saves their marriage. By learning to set boundaries and speak in a way that they will be heard, the victim communicates in a way the abuser finally understands. The abuser doesn’t call the shots anymore. Their spouse no longer lives on Planet Me. In some cases, the abuse stops.

As this woman’s story shows, finding her voice and (for the first time in more than thirty years of marriage) asking questions, led her to realize her boundaries had been violated and trampled, and she was no longer willing to look the other way and ignore the evidence of her husband’s many affairs. Without children at home, it was easier for her to leave.

[For a while I told myself,] I’m just going to pretend like nothing’s happening, and I’m just going to carry on and have a happy marriage. I had learned to protect myself by disassociating and never confronting him, so we actually got divorced never having had one fight…

I think because of my therapy, and [because I was challenging] him, he started coming home at a normal time; he started taking me out on walks and things; he started paying attention to me, so I think he was doing that whole thing that abusers do to try to keep you hooked.

[He started confessing his long string of infidelities, some of which were recent,] and he thought that would appease me… All of a sudden I was sitting there, and I realized I had no clue who I was married to. And that was frightening. That was very frightening. I just realized I did not know who this man was…

[The] night that he told me, I lost it. All I could think of was committing suicide…

[We were out of town and] we faked our way through the weekend. I was just out of my mind, I was so shocked and so overwhelmed.

Later, I said if I hear anything more that he’s done to me, it’ll crush my soul. I can’t… I can’t hear it, and I’m filing for a divorce. (For this woman's full story, click HERE.)

She left. Today she has found happiness and peace, and she ministers to other Christian women who are married to serial adulterers.

When the children grow up and leave, or when a pandemic shuts down the workplace, and suddenly you find yourself secluded in a home with someone who doesn't care about your wellbeing. You're vulnerable, on high alert, fearful, and walking on eggshells, because behind closed doors, there's no one to witness what happens, and no one to provide a distraction.

I used to wonder why people would get a "Gray Divorce," a phenomenon that leaves tax experts scratching their head as to why someone would jeopardize their financial future in their 60s, 70s, or 80s.

But you and I know why they leave. The needed a Life-Saving Divorce.