But I Thought it Was God’s Will for Me to Marry this Person! 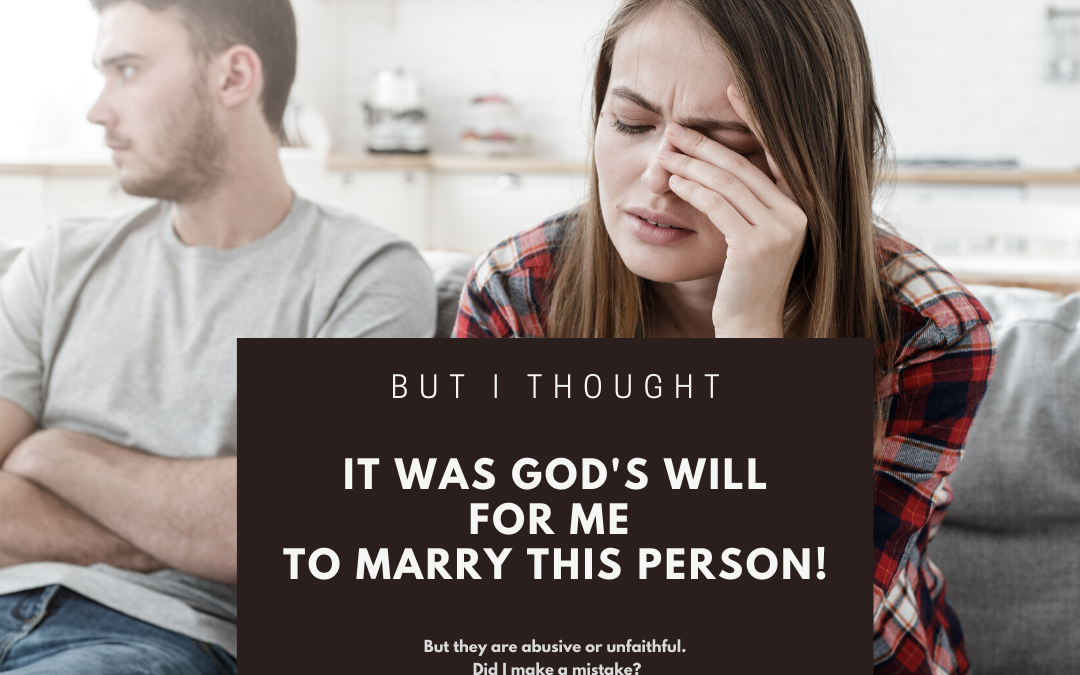 I thought it was God's will for us to marry. I prayed and asked for the Lord's leading. Did God make a mistake? Did I make a mistake? Did I misunderstand God? Was I just lying to myself? Did some sin from my past cause God to give me a bad spouse? That's what many Christians wonder when they marry someone who seemed to be loving and godly, but has a developed pattern of being destructive.

DID GOD BRING US TOGETHER?
I PRAYED AND THOUGHT IT WAS GOD'S WILL FOR ME TO MARRY THIS PERSON.

If you're a Christian, no doubt you had a strong sense that "God brought us together." What do you say when you realize the person you fell in love with isn't safe? What if the person you made vows to, doesn't keep their vows to you? What happens if your marriage is abusive or unfaithful or disrespectful or dangerous, and you are wondering about divorce.

I think it's worthwhile to remember that God chose king Saul in the Old Testament to be king. And for a while, King Saul did a decent job. But later, Saul lost his faith in God's power, he disrespected God, he disobeyed God. He started accusing godly people of being ungodly. He started making destructive decisions. He lied, he swindled, he tried to kill those loyal to him. And God removed him from the kingship.

So, yes, you can feel that it was God-ordained to meet and marry your spouse. You can also believe that your spouse's sinful behavior broke that special status. You can believe that following God and having a godly marriage requires TWO people to keep the covenant. Sometimes one person doesn't. Despite the prophet Samuel's prayers, King Saul didn't go back to keeping the covenant he had with God. He didn't repent in such a way that it resulted in humility and a life-long change. So God cut him loose. The chosen king became the rejected king.

BONUS:
Just for fun, here's an example of a famous pastor, John Piper, making the the same false claim.

Reminder: in the Old Testament, King Saul was:

But his own lies and deceit caused God to reject and replace him with David the shepherd.

The same goes for a spouse who sin, betrays, and cheats. Perhaps God withdraws his blessing (in the form of a godly spouse—YOU) from his life.

Your spouse may have been a person who behaved with integrity at the beginning of your marriage. Your decision to marry them was likely bathed with prayer and blessed by your church. But having their name on a wedding certificate isn't a magical spell that prevents them from taking the wrong path and sinning repeatedly and deliberately. And we're not talking about the run-of-the-mill sins such as being in a bad mood and snapping at someone or some other sin that causes little or no injury. We're talking about the marriage-endangering sins that do damage to the safety, love, and respect in the marriage.

Are you going through a life-saving divorce? I’d like to invite you to my private Facebook group, "Life-Saving Divorce for Separated or Divorced Christians." Just click the link and ANSWER the 3 QUESTIONS. This is a group for women and men of faith who have walked this path, or are considering it. Supporters and people helpers are also welcome.  Also, sign up for my email list below.