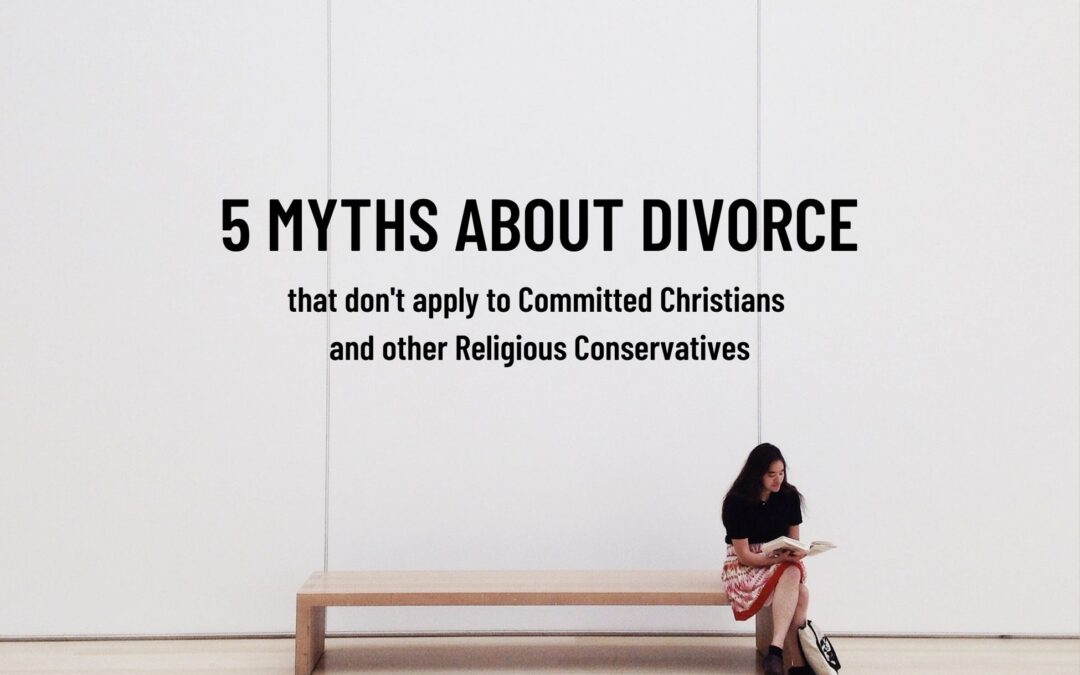 Let’s face it, well-meaning friends and family and even counselors give us advice on fixing our marriages: Try harder, pray more, be more agreeable, have more sex. But what if you’ve done all that, and your marriage is still destructive? What if the tension is palpable, and you and the kids are walking on eggshells, doing anything you can to keep your spouse from "going off"?

I’ve created a list of 27 false messages—that not-so-helpful advice—that our churches give us to persuade us to stay in an unsafe marriage that is starting to destroy our life and sanity. I called these the myths of divorce. I’m not going to go over all 27 of them today, just the top five according to Google Analytics. But if you want to see the entire list go to www.lifesavingdivorce.com/myths-of-divorce.

Myth: The vast majority of divorces are for frivolous reasons.  (No, half are for serious reasons.)

Myth: You just didn't try hard enough.  (If you take your faith seriously, you tried harder than most people.)

Myth: Divorce universally destroys kids. (No, it doesn’t. Even the most pessimistic major researcher of the past 50 years said 7 in 10 kids turned out “okay,” “very well,” or “outstanding.”)

Myth: God will heal your marriage if you pray hard enough.  (No, God never promised that.)

Myth: Malachi 2:16 says "God hates divorce" and that's always been the traditional translation for the past 2,500 years. (No, it was a trend that lasted 385 years.)

MYTH: 95% OF DIVORCES ARE FRIVOLOUS

Our pastors and youth leaders and Christian radio programs promoted this. They made it sound most divorces were frivolous, and only a handful were really serious problems.

About half of divorces in the U.S. are for “life-saving reasons” — the serious reasons: For example, a pattern of sexual immorality, physical violence, chronic emotional abuse, life altering addictions, or severe indifference or neglect.

STUDIES ON REASONS FOR DIVORCE

This is the self-condemning, inward navel-gazing myth. We turn ourselves inside out trying to figure out what we did wrong and how we can fix it.

The truth is: People in the most destructive marriages often try harder to fix their marriage than anyone else.

In 2012, researchers Hawkins, Willoughby, and Doherty found something surprising about marriages that have highly destructive factors (abuse, drug or alcohol addiction, or infidelity): The innocent spouses in these highly destructive marriages often doubled down and continued their efforts to save the marriage—and were more likely to believe that divorce can be prevented if both of them “try harder.”

This paradox amazed the researchers. In other words, the more severe the issues were, the more hopeless it looked, the harder people tried.

These abuse/betrayal victims weren’t looking for the easy way out. They were trying to stay in.

Even in the most horrible marriages, often the spouse hangs in there for a long time. I think we can explain it this way: Early in the relationship, many people discovered their spouse had problems, but they persevered anyway, setting aside their own happiness, health, and peace to keep the relationship going. And each time there was abuse or betrayal, they doubled down and did it again. These people forgave and went the extra mile, even to the point of ruining their health, falling into depression, and sacrificing the wellbeing of their children.

The first time you walked back into a toxic home and faced your abuser was the day you proved to the world that you believed in the sanctity of marriage.  Okay, you proved it. Now take the next step to get to safety.

MYTH: DIVORCE WILL DESTROY YOUR KIDS, SO YOU SHOULD STAY FOR THE KIDS

Let’s be honest, any good parent is willing to sacrifice themselves for their children. We hate to see our kids suffer and a good parents doesn’t want them to be hurting.

We know the divorce is hard on kids: the moving, the switching schools, having to make new friends, and missing the other parents. We know that those first two years are excruciatingly painful. But let me highlight the facts that 30 years of research have found.

Reality 1: After those difficult first 2 years, about 8 in 10 kids of divorce turn out fine, with no serious long-term emotional, psychological, or social problems.

Reality 2: Physical and emotional abuse and conflict are horrible for kids to experience or observe. Researchers have studied toxic homes over time. They’ve found that the kids whose parents divorced had 10 times better well-being than kids whose parents stayed.

Reality 3: When people in good or average marriages divorced simply because they got bored or felt unfulfilled—yet the kids felt safe and accepted—those divorces were actually worse for kids long term.

Now I know people will refer to a bestselling book Dr. Judith Wallerstein that was published 21 years ago that suggests divorce is horrible for kids, but even Wallerstein says that where the home is toxic, divorce is the better option. Here are 10 quotes from her. www.lifesavingdivorce.com/wallerstein

MYTH: GOD WILL HEAL YOUR MARRIAGE IF YOU PRAY HARD ENOUGH.

This myth puts pressure on us to stay and pray to prove our faith and spiritual maturity, and to be seen as being close to God.

Here’s the last one. This is the granddaddy of all divorce myths.

First, let’s take on the myth that God is against all divorce. He isn’t. God hates abuse more than he hates divorce. We know that because two times in the Old Testament God commanded divorce for physical and emotional neglect and abuse in Exodus 21:10-11 and Deuteromy 21:10-14. Divorce had to be an option since biblical times—to protect women—from a cruel heartless spouse. And of course, that worked the other way around if the wife was the malicious one.

There are multiple times that divorce is actually commanded in the Bible (for example in Ezra, where the Jewish men are called to divorce their foreign wives) and God himself divorced Israel in Jeremiah 3:8 for spiritual adultery.

(Myth 18 has been updated to include more verses that define abuse: www.LifeSavingDivorce.com/myth18) Or see my YouTube video Divorce as God’s Protection of Women in the Bible.

Then for a 385-year period it was anti-divorce verse.

And after that 385-year period, the new major Bible translations went back to the original anti-abuse interpretation.

What God hates is the treachery that led men to dumping their wives unjustly. Let me explain that in another way: the book of Malachi was written about 500 years before Jesus, and for the next 2,100 years, it was interpreted as an anti-abuse verse. Then in 1611, King James’ translators changed it to an anti-divorce verse. I don’t know why. Maybe because King James’s mother was killed by King Henry VIII’s daughter.

What I’m saying is that the great leaders of the Reformation, Martin Luther, John Wycliff, John Calvin ALL interpreted Malachi 2:16 as an anti-abuse verse, not an anti-divorce verse. John Calvin actually believed, based on this verse, that marital abuse was twice as bad as armed robbery and murder because it was done in secret behind the closed doors of the home that should have been safe.

Anyway, fast forward 385 years after the King James Version was printed. Ever since 1996, the new major Bible translations use the anti-abuse interpretation.  You see a Dead Sea Scroll fragment was found that confirms that interpretation. That means the NIV 2011 update, the ESV, and the CSB (Christian Standard Bible, publishing by LifeWay the publishing arm of the Southern Baptists). 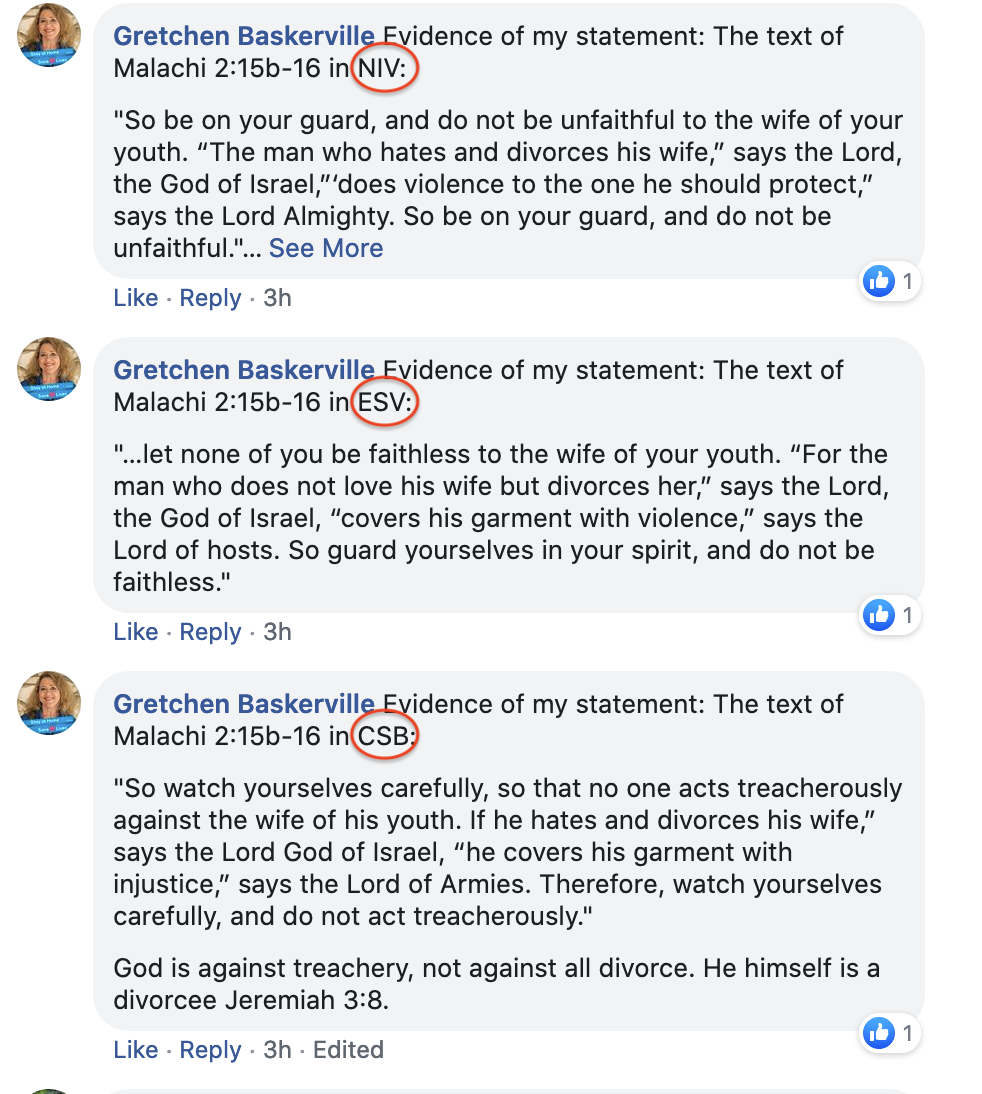 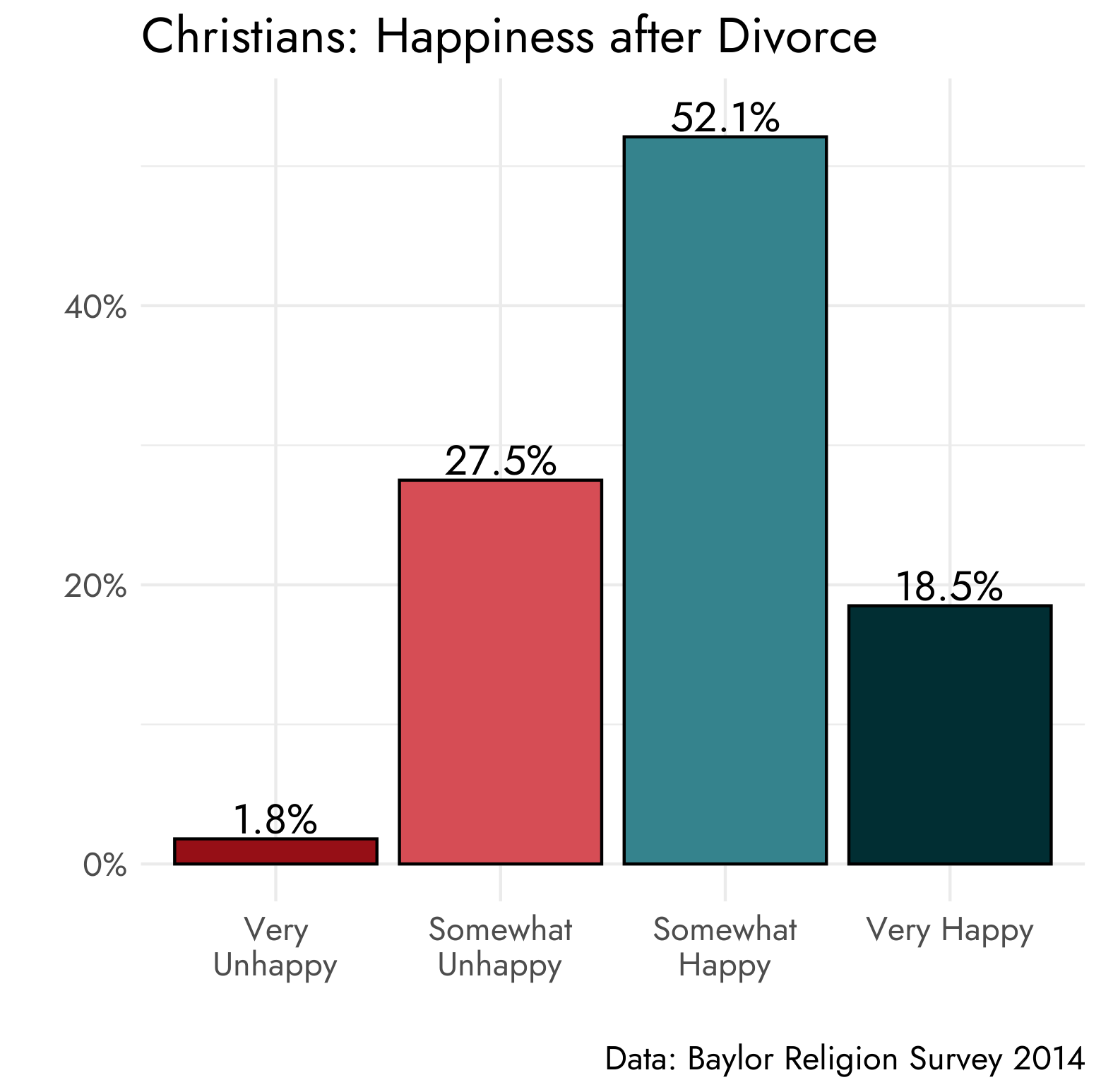