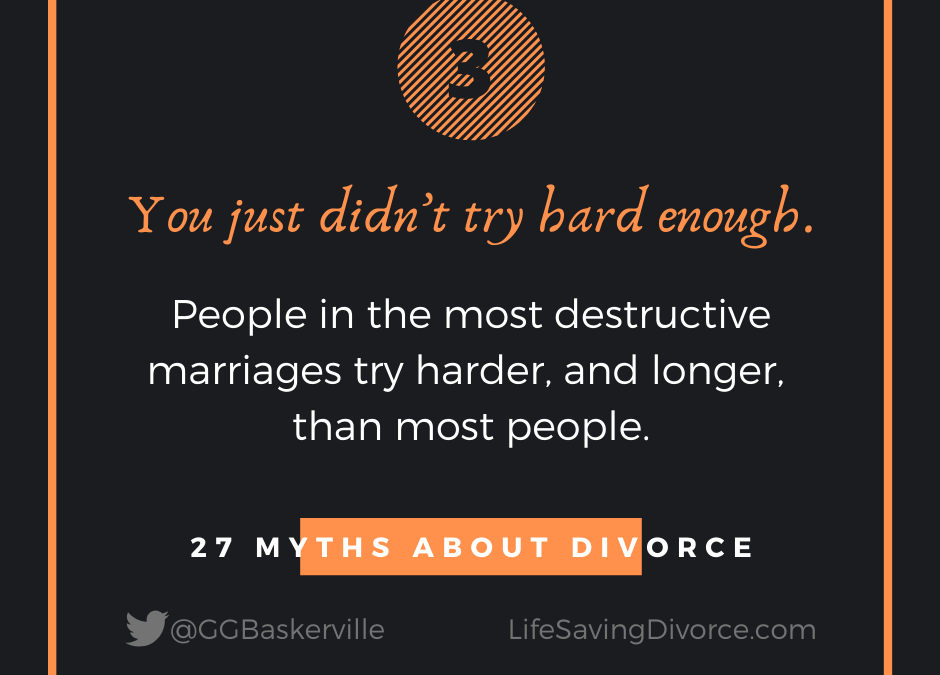 This is Myth 3 of 27 Myths about divorce that aren't likely to be true of committed Christians who love God and take their faith seriously. These messages make us worry if we're pleasing God. They contain little accusations that our motives aren't right. They make us second-guess ourselves when we try to get ourselves and our children to safety. Many of us have heard these messages all our lives and wanted to avoid them.  So although these myths may be true for people who are selfish or immature, they aren't true for a person who invested their heart and soul into the relationship, even when the other person didn't.  See all the myths on one page. See the next myth.

TRUTH: People in the most destructive marriages try harder, and longer, than others.

This myth assumes you haven’t put in much effort. You gave up too easily. You were a quitter. People who hold to this belief say all terrible marriages can be fixed if one spouse tries harder—or prays harder—and all divorces happen because people quit too soon when they should have kept trying. This message says you are a failure because you couldn't go the distance like everyone else did.

The truth is: People in the most destructive marriages often try harder than anyone else.

Researchers have found something surprising about marriages that have highly destructive factors (abuse, drug or alcohol addiction, or infidelity): The innocent spouses in these highly destructive marriages often increase their efforts to save the marriage. That is, in the face of these very serious problems, the committed spouses continue to work to save the marriage—and were more likely to believe that divorce could be prevented if both of them “try harder.”

This paradox amazed the researchers.In other words, the more severe it was and the more hopeless it looked, the harder people tried. They weren’t looking for the easy way out.

Even in the most horrible marriages, often the spouse who is being abused or mistreated hangs in there for a long time. Early in the relationship, some knew their spouse had problems and persevered anyway, setting aside their own happiness, health, and peace to keep the relationship going.

They never dreamed that small red flag would grow and become terrifying. Their desire to be married and stay married was extremely high. They kept trying until the day they finally said, “Enough is enough.”

The first time you walked back into an abusive home and faced an unfaithful or abusive spouse was the day you proved to the world that you were dedicated beyond the call of duty to hold your marriage together.