Turning Point 2: My Children Are Being Abused or Seeing It 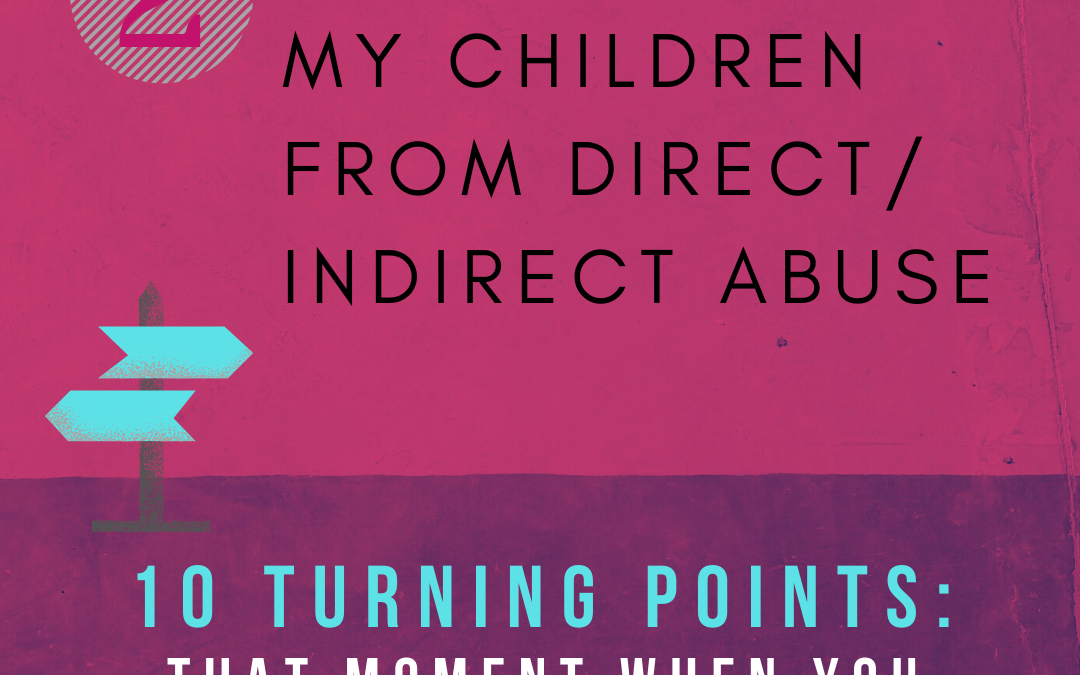 Turning Point 2: Protecting My Children from Direct Abuse, or Seeing Me Get Abused

Note about this "10 Turning Points" blog series: A turning point is that eye-opening moment when you know you must get out of your marriage to save your life and sanity, and often that of your children. This series is based on extensive interviews I did with people of faith who love God, take their beliefs seriously, and hung on longer and tried harder than most people would have. We're talking about marriages where there's a pattern of adultery, sexual immorality, domestic violence, chronic emotional or verbal abuse, abandonment, or neglect due to addictions. These are the Life-Saving Divorces.

I watched my son slowly start getting more nervous about Daddy coming home. We had to be quiet in the car and at home.

Another woman who met her husband at a major Christian college was in such a fog of confusion due to her husband's lies and manipulation that she didn't know her husband was severely beating their children. He had done such an effective job of threatening them, and beating them in ways that were covered by clothing, their own mother had no idea. To outsiders he was a model Christian husband who kissed his wife and told her he loved her every day. It was a great illusion, the perfect mask, for a man who tormented his family emotional and physically. Finally her daughter told her the truth, and she discovered—

My husband spanked my daughter with a rubber tarp strap at least 25 to 30 times. He told her, “Mom and I have decided this is what needs to be done.”

My daughter was covered with bruises. I never knew about it.

And my daughter said, “Well, don’t you remember the time Dad spanked me so much?”

I reacted, “Honey, what are you talking about?”

She said, “Dad said you guys were in agreement about it.”

Trauma has a way of causing people to disassociate from reality. Many people just want to survive from one day to the next, and so they detach from the horror. As this mother finally understood the truth, she discovered that her sons had similar stories of brutal beatings when she wasn't around. Her husband had told the kids they deserved it and demanded they not complain. They did what they were told. This man was a leader in the community and was a well-respected professional.

Two very large studies of the effects of adverse childhood experiences were published in 1998 and 2019. They showed that children who are abused, who observe a parent being abused, or who live in a household with substance abuse or mental illness or incarceration may suffer health effects in their adult years.[1] And if they experience or observe multiple types of abuse, violence, substance abuse, or other factors as they grow up, they will likely have more health problems as adults.[2]  Also, another study showed that a father who has at least 3 of the 7 anti-social traits (see list) and resides with his children, has a bad effect on the kids' mental health. One in eight children in these situations were found to develop conduct disorders themselves.

One woman who'd been beaten and cheated on for years, finally drew the line:

Finally, the day came as I… told my husband the marriage was over, and that I would never allow him to beat me again. Before that moment, I never really knew my own strength. I knew God was with me because of the peace that I felt. My husband shed tears and made promises, but the decision was made. I would never be hit again, and I wasn’t going to allow my daughter to witness that kind of behavior for one more day.

Your kids are victimized by watching you be humiliated emotionally and/or intimidated physically. They are traumatized by seeing one parent take advantage of the other. Sometimes they see the abuse more clearly than you do, and they want you to get away! Watching you being treated without respect damages them. (But the kids’ healing starts the day you walk away.)

A woman in one of my divorce recovery groups waffled back and forth about staying or leaving. She said this conversation with her teenage daughter turned the light on for her:

My daughter said, “Mom, you have taken him back so many times in the past 21 years of my life, and he keeps treating you badly and doing the same thing. Mom, my biggest fear is that you’ll take him back again.” Then my thoughts went to my two young sons and that I didn’t want them to repeat this behavior on their wives when they grew up, or on me, if they ever got angry. So I turned to my daughter and said, “Honey, you will never have to worry about me taking your dad back again.”

Sometimes parents won't leave for themselves, but they will to protect their children.

1    Felitti, VJ, Anda, RF, Nordenburg, D, et al. "Relationship of childhood abuse and household dysfunction to many of the leading causes of death in adults. The Adverse Childhood Experiences (ACE) Study," May 1998, retrieved 4-27-2020,  https://www.ncbi.nlm.nih.gov/pubmed/9635069.  In the 1998 study, the "Seven Adverse Childhood Experiences" listed were physical abuse, sexual abuse, violence against mother (later changed to violence against anyone in the household), living with household members who were substance abusers, mentally ill, suicidal, or ever imprisoned