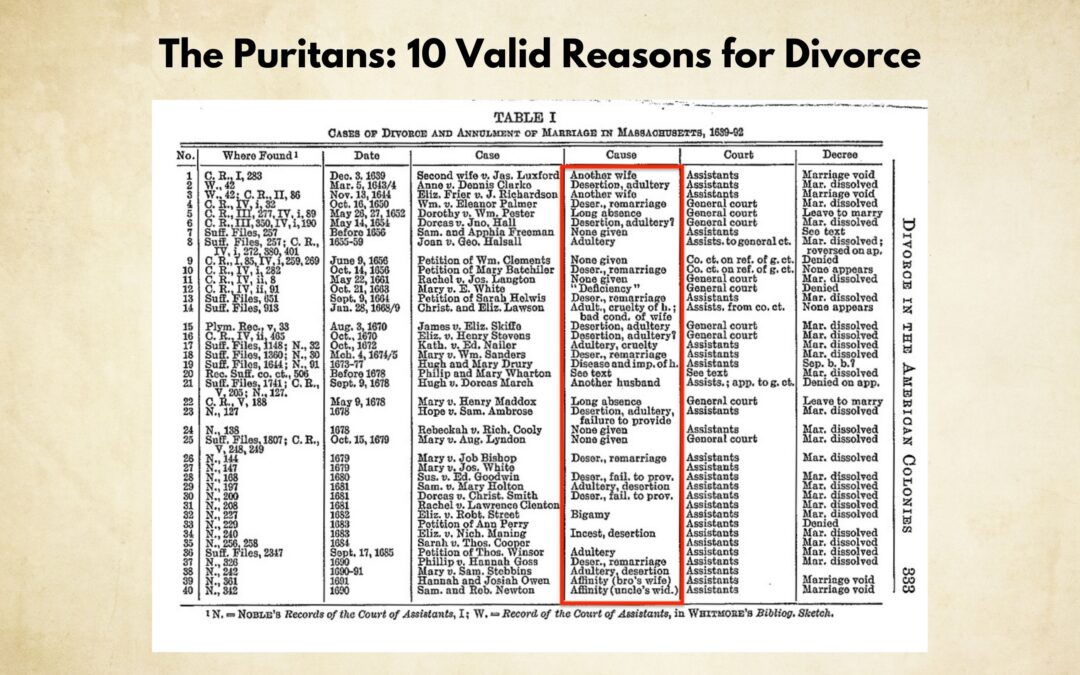 This table shows every known divorce among the Massachusetts Puritans 1639-1692. There are 40 divorces listed and the columns give the record location and page, the date, the names of the individuals, the cause of the divorce, the court (the jurisdiction), and the decree (the final judgment)

There weren't a lot of divorces in Puritan society, but we do have records of forty of them.

John Calvin's Influence on the Puritan View of Marriage

The famous Reformer John Calvin (1509-1564) was angry at men who abused their wives. He thought those cruel husbands should divorce and let their tyrannized wives go free.

Here's how John Calvin translated Malachi 2:16 in his Geneva Bible

If thou hatest her, [a]put her away, saith the Lord God of Israel, yet he covereth [b]the injury under his garment, saith the Lord of hosts: therefore keep yourselves in your spirit, and transgress not.

So Calvin interprets it to say "If you hate your wife, divorce her," says the Lord God of Israel..."  This is how nearly all Bibles for the 2,100 years before the King James version interpreted Malachi 2:16. It is in keeping with the teaching in Exodus 21:10-11 that commands a man to divorce his wife if he refused to provide the basic minimum level of physical and emotional care.

His commentary on Malachi 2, gives this interpretation to Malachi 2:16 (the so-called God-Hates-Divorce verse).

Here John Calvin is talking directly to abusive husbands who try to hide their bullying behavior from God and others.

"What else is this," he says, "but to cover by a cloak your violence, or at least to excuse it? for ye do not openly manifest it: but God is not deceived, nor can his eye be dazzled by such a disguise: though then your iniquity is covered by a cloak, it is not yet hid from God; nay, it is thus doubled, because ye exercise your cruelty at home; for it would be better for robbers to remain in the wood and there to kill strangers, than to entice guests to their houses and to kill them there and to plunder them under the pretext of hospitality. This is the way in which you act; for ye destroy the bond of marriage, and ye afterwards deceive your miserable wives, and yet ye force them by your tyranny to continue at your houses, and thus ye torment your miserable wives, who might have enjoyed their freedom, if divorce had been granted them."

Treachery Behind Closed Doors When A Person Ought to Feel Safe

Notice how Calvin says it's one thing for a robber to kill a traveler in a forest out in the open, where that person knows there is danger. But it's especially treacherous for a robber to offer hospitality and invite a guest into their home and then kill and pillage them. And yet this is what cruel men do to their wives. They pretend to honor the marriage bond, but instead they torment their wife under her own roof, secretly, hidden under a cloak, in the one place that ought to be safe. John Calvin says, God sees it, and he isn't dazzled by clever concealment. In fact, the concealment makes it twice as bad. It would be better to let the tormented wife go and enjoy her freedom.

Link to two Reformed pastors (Pastor Sam Powell and Pastor Jeff Crippen) discussing this quote, and why they believe abuse victims have valid grounds for divorce AND links to other pastors and Calvinist pastors/theologians today who believe that abuse is grounds for divorce.