Should I Keep My Married Name After Divorce? 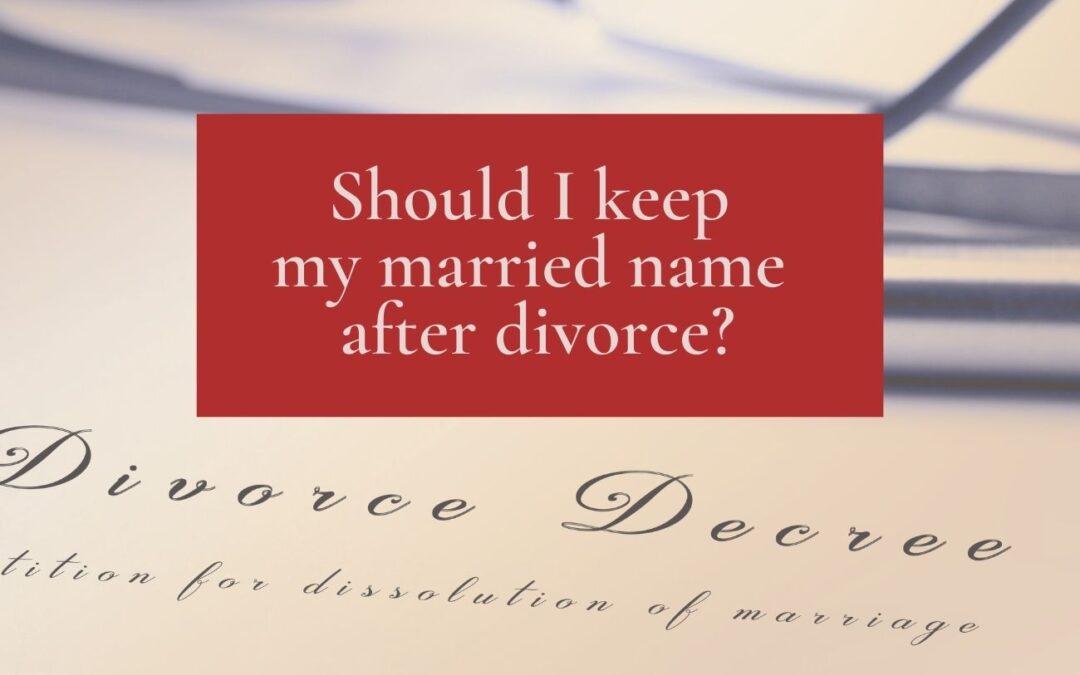 PROS and CONS: Keep Your Married Name After Divorce? Or No?

In June 2021, there was an informal poll in my private Facebook Group: Life-Saving Divorce for Separated or Divorced Christians. More than 300 women participated in the poll, which asked the question: What did you do legally with your last name after divorce?

See more than 40 ideas and comments below (lightly edited for anonymity). 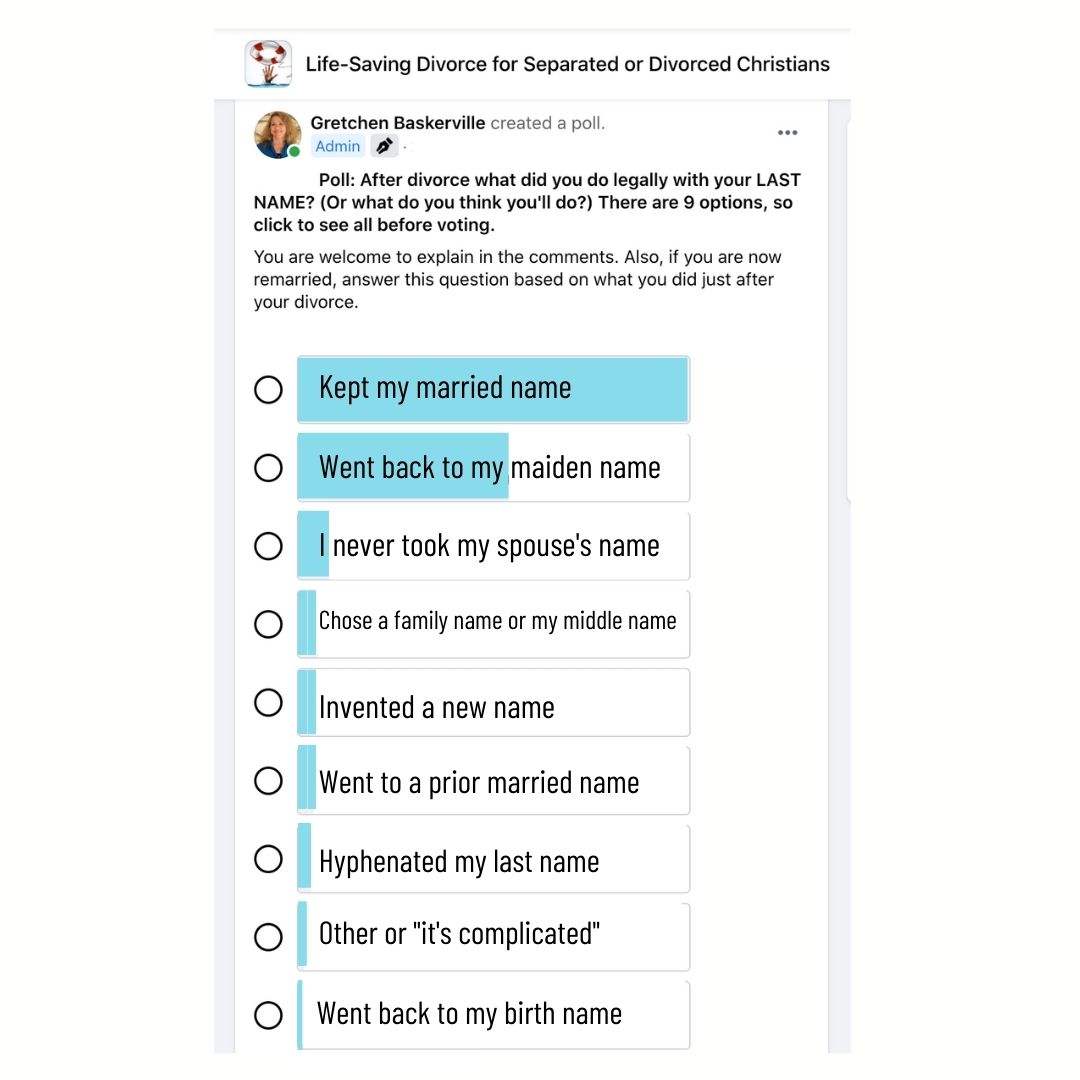 40 Women tell why they changed their last name after divorce—or not.

“I kept my married name for my children.”

I’m keeping my married name for my kids. Plus I’m a teacher and it gets confusing if you change your name. If I ever want to change my name, I’ll wait until I get remarried.

I want to go back to my maiden name, but I want the same last name as my kids.

I kept my married name because I worked so hard to get published and it was my name for 33 years before divorcing.

I kept my married name because I have claimed it. I worked too hard on my second degree to relinquish my name that’s on it. It’s my name now! Also, it’s such a hassle to go through all the name-change paperwork.

I kept my married name because I’m known by this name in my public life. And I don’t like my maiden name.

I am changing back to my maiden name. I weighed keeping it for my children and for consistency as a professional, but realized it felt more detrimental to me to keep his name. My children were sad at first, but have accepted this. Especially since his name is a different ethnicity. I always get questions about it and I don’t want to answer that it’s my ex-husband’s name.

I kept my ex-husband’s name up until now for my son’s sake. But his father is from another country and it annoys me when I have to keep spelling that long name. I’ve decided to create a new name altogether, and possibly give my son the choice of his surname.

I made up a new last name that incorporates both of my kids’ first names. It is my way of being connected to them by name. But I often wonder if having different last names will complicate life.

I kept my name because it matters to my kids. I got remarried and still go by both names. I legally took new husband’s name, but it feels less confusing for the kids to introduce me with their last name and I don’t correct them.

I’m going back to my maiden name as soon as I finish the process of buying a new house.

I’m going back to my last married name because just about all my business activities are connected to it. I had it for a very long time.

I’ll probably keep my current married name because I like it and because I’m lazy. Ha ha.

I’m keeping my married name. I like it. I associate it with my kids more than with my soon-to-be-ex-husband now.

I use a pseudonym in my writing, and I’ve never used my last name in writing or ministry in 35 years. So my last name really doesn’t matter to me professionally.

Even though I had 10 children with him, I went back to my maiden name. He thinks he owns and controls me. Nope. I do not belong to him or to his family.

I’m not concerned about having the same name as the children because it’s not a big deal in today’s society and six of my children are girls. Five are already married with different last names.

I don’t want to keep my married name. I am not part of his toxic family anymore, so I don’t want his name! He’s angry about this, but I’ve gone back to my maiden name professionally, on LinkedIn, Facebook, etc.

My kids all have the same middle name. I decided to use their middle name as my new last name. My thought is that if I ever remarry, I’ll make my new husband’s last name my last name. And then I would change my current last name to my middle name. We’ll see.

I wanted to invent a whole new name since both my married name and my maiden name are triggering.

I established my career under my married name, so I’m keeping it. Plus, it matches my son’s name.

At my final hearing, the judge said I could choose whatever name I wanted. I laughed and said, “If I had known that beforehand, I’d have done more research.”

I had a friend who changed her last name to the city she grew up in. It had good associations for her.

I created a name that’s a combination of my kids’ names.

I reverted to my maiden name. My married name was long and confusing. My daughters already carried both their dad’s name and my maiden name. And I didn’t want my identity connected to him anymore. Also my initials and my father’s initials were the same prior to my marriage. And I wanted to go back because I’m Daddy’s girl. My dad died last year so I won’t ever change my name again, even if I remarry. I don’t want to lose that connection again. Plus my oldest child wants to drop her dad’s name and use only mine.

I’ve chosen my mother’s maiden name, hyphenated with my birth name. I’ve already spoken with my children and they are supportive.

I regret keeping my married name, but at the time I was too ill to deal with changing everything. Now I’m struggling to get it changed to a new last name. It’s a thorn in my flesh.

I hyphenated my married name and maiden name so that I can slowly drop his name over time.

My husband was spiritually abusive and told me that I was married to him forever in God’s eyes. I couldn’t wait to take my maiden name back. My kids are young adults so they don’t care.

I want to change my last name, and so do my children. We just haven’t decided on a last name yet.

My ex-husband’s name was associated with generational sins and trauma. I didn’t want to go back to my maiden name, because there’s some abusive men on my side of the family too. I ended up choosing a combination of women’s names from my heritage. I wanted to honor the strong women. And even if I marry again, I won’t be changing it.

We were a blended family, so I have kids with both last names. I’ve decided to officially hyphenate my name. This gets under my ex-husband’s skin.

I’m taking my grandma’s maiden name. She was more of a mother to me than anyone.

One man commented, “I wish I could get my name back from my ex-wife. She was a serial cheater.”

I’m changing it back to my maiden name. My maiden name is Hispanic. My ex-husband’s name sounds English.

My stepfather has been a wonderful dad to me since high school. So I use his name as my maiden name. That’s what I went back to.

I’ll keep my married name. I’ve had it longer than any other and it’s such a hassle to change everything. It’s a common name, so it doesn’t really bother me that it’s my abuser’s name too.

My ex-husband is Hispanic. When we got married I added his last name to the end of my maiden name, without hyphenating it. And we named our children in the traditional way: paternal last name plus maternal last name. This works well and I can shorten my name to use whichever name I choose depending on the occasion.

When my nephew became an adult, he changed his last name to his mother’s maiden name. That means he had the same last name as his grandfather, whom he loves very much.

I turned my middle name into my new last name.

I went back to my birth name, the name I was born with.

I plan to change my name to that of an elderly friend who was childless and was the mother I always wanted.

I invented an entirely new last name that defines my own identity.

He told the children that I was not a Brown, and that I should change my name. That they (the kids) were family, but I was not. I refused.

I was proud of both my names: my married name and my maiden name. So I kept them both, but did not hyphenate them.

I kept my married name but chose to pronounce it differently than my ex-husband’s family did. I pronounce it the typical way.