Lundy Bancroft: Why Mothers Are Losing Custody of Their Kids to Abusers, and What You Can Do About It 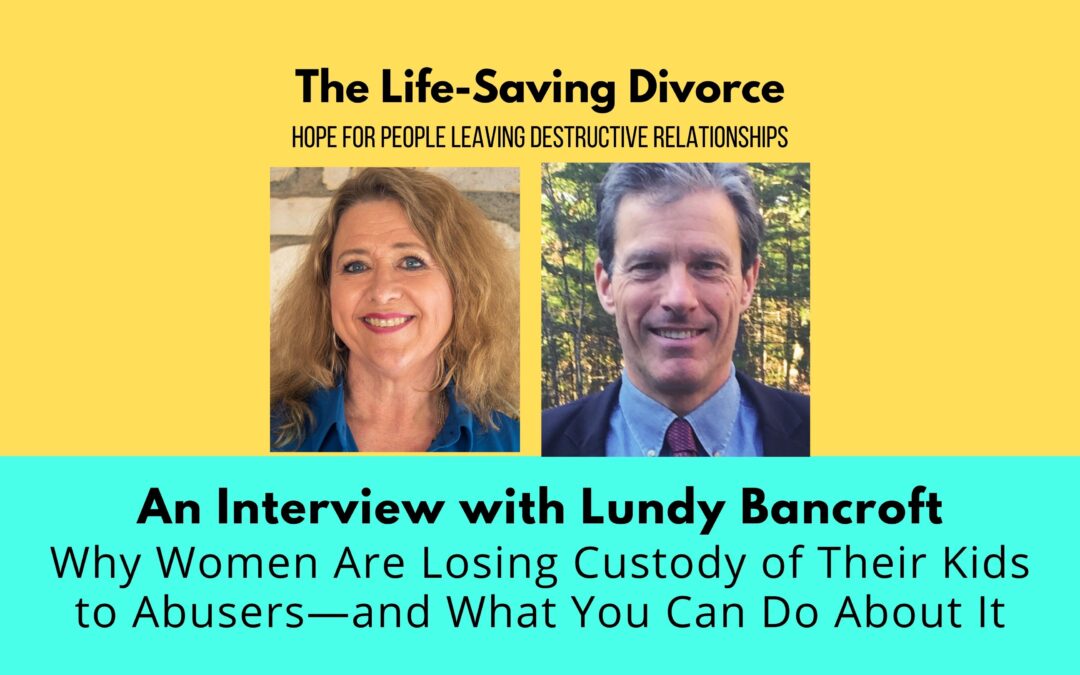 Why Mothers are Losing Custody of their Kids to Abusers, and What You Can Do About It

Interview with Lundy Bancroft, the bestselling author of Why Does He Do That? Inside the Minds of Angry and Controlling Men about his new novel, IN CUSTODY (Amazon affiliate link: https://amzn.to/3AD1LtP).  It explains why mothers are losing custody of their kids to abusers, and what you can do about it.

Link to the video interview with Lundy Bancroft:   https://youtu.be/ag6TbrDBlvg

In Custody by Lundy Bancroft Book Summary (no spoilers)

Part humor, part romance, and part suspense, Lundy Bancroft's In Custody is the story of a young journalist who sets out to discover why a mother and her daughter have gone missing -- and finds herself digging into the dark world of family court corruption. In Custody is available in paperback & Kindle editions: (Amazon affiliate link: https://amzn.to/3AD1LtP) It tells the story of a mother who is not believed when she tells the court her husband is abusive. To make matters worse, the custody evaluator doesn’t believe her or the daughter either, and insists on joint custody with the father. We learn that the mother feels she has no choice but to run and escape in the night with the girl. But something goes wrong and it’s up to the police to find the missing girl, and up to journalist Carrie Green to find out the truth.

The new book is about corruption in the child custody system. It discusses why mothers are losing custody of their kids to abusers, and what YOU can do about it.

Key Quote in the Lundy Bancroft Author Interview about His New Book, In Custody

Highlights Of The Video Interview With Lundy Bancroft On His New Book, In Custody

04:50 – Courts aren’t always doing a good job protecting kids, so sometimes the mother wants to take things into her own hands and flee with the child. IN CUSTODY tells the tale of a mother who escapes by means of an underground network. Do these exist?

06:20 – Why are mothers losing custody of their children in court? Why are courts stripping custody from mothers and granting 50/50 custody to violent men?

06:40 – History: Back in the 1970s and 1980s child support enforcement laws had an unintended consequence. Stricter collection of child support created a backlash. Fathers became aggressive and began grassroots organizations to spread disinformation. (It might have been better for the children to let abusers walk away, even if that meant less or no child support.)

07:30 – So-called “Father’s Rights” organizations sprang up. They were not interested in the legitimate concerns of fathers. They fought to throw out disclosures of violence and sexual abuse made by the mother, by the children, and by doctors and therapists. They started attracting abusers to their organizations, even recruiting them. They are mainly interested in owning and controlling their children, not in spending quality time with them (minute 15:00). Having said this, sometimes mothers are genuinely abusive and the father is a nurturing parent. Lundy talks about mothers who abuse their children at 30:00, and how the courts treat fathers who disclose a mother's abuse differently than mothers who disclose a father's abuse.

8:48 –  In the 1970s-80s, laws changed to give women the right to live without being subjected to abuse. No-fault divorce laws were designed to help abused women get away. The pent-up demand spiked the divorce rate up for 20 years.  In response, “Father’s Rights” organizations organized county by county, and court by court, to object to paying child support.

09:26 – Even though the new laws saved lives (reduced the suicide rate of women, domestic violence rate by and against women and men, and homicide rate of women killed by intimates — http://www.lifesavingdivorce.com/divorcesaveslives) the family law courts have not wanted to change. They dismiss disclosures of domestic violence, even from children.

A lot of divorce professionals are making money from this broken system. It’s a conflict of interest for them to do a good job: attorneys, custody evaluators, parenting coordinators, reunification therapists.

11:45 – Family Court is getting worse. It is enabling domestic violence. It is even forbidding mothers to protect their children.

12:30 – Mothers need to organize the way that men have. Merely passing laws isn’t enough. Mothers need to protest, picket, speak out in communities, and get on the news. They need to recruit just as abusive men have.

15:25 – Moms feel isolated. They need support and to know they are not alone. Mothers need to join organizations and get educated. See link to 11 organizations: Resources on Family Court Corruption & Reform  https://www.incustodythenovel.com/blank-page-2

21:55 – Yes, it is possible to combat Father’s Rights ideology and win in court in some cases, but in others, the mother may have no choice. She usually doesn’t have the time or money to appeal in court.

23:10 – Family Law Court doesn’t have to follow rules of evidence or rules of procedure.

26:30 – Some custody evaluators lie and don’t even talk with the children.

29:25 – There are mothers who are abusive to children. Sometimes the husband genuinely is a victim of a narcissistic wife.

31:44 – In the worst case scenarios, mothers take their children and run. It’s best to do this before divorce or a temporary custody order is filed. Otherwise it might be considered kidnapping or custodial interference.

35:20 – There are underground networks that help mothers who have credible evidence to run and hide.

39:00 – Get educated on the cases where the courts betrayed mothers who were trying to protect their children, even when there was substantial evidence of abuse by the father.  See the cases below, point #10.

40:00 – Pros and cons of going to criminal court in addition to family law court.

41:30 – Most kids side with their nurturing parent. But some side with the abuser. Lundy has a book, When Dad Hurts Mom, that will help you develop strategies to deal with this. (Hint: Children need to be encouraged to develop their own critical thinking skills.) Bancroft also has 4 new blog posts on this. See Point #14 below for links.

Also, in Gretchen's private Facebook group, The Life-Saving Divorce, a POLL was conducted. More than 8 in 10 parents who responded said that at least one of their children was supportive of them being divorced.  So, yes, there are some children who do not support the divorce, but they are in the minority when there are serious reasons for the divorce. 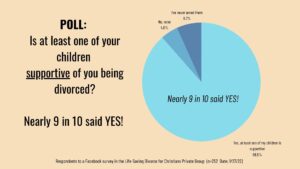 Poll: Is at least one of your children supportive of you being divorced?

4. —Join a Community Organization in Your Area

These groups highlight the issue in local courts and news media. For example, this new organization: Mothers on the Rise. Reforming family court corruption and fighting against court abuse.  https://www.mothersontherise.org/

6. —Learn how to Fight Court Abuse in Custody Cases https://lundybancroft.com/child-custody-justice/what-can-i-do/

7. —Find Out the Pros and Cons of Calling Child Protective Services
https://lundybancroft.com/child-custody-justice/should-i-involve-child-protective-services/

8. —Know What to Expect in Family Court

9. —Get Prepared for Custody Evaluators and Forensic Evaluations

10. —Know the Stories of Mothers Who Had Evidence of the Father’s Abuse, But the Family Court Failed to Protect the Kids

Do an online search to see their stories.

12. —Become Familiar with Court Abuse Awareness Advocates and Researchers Who Document Evidence of Court Bias. Make sure your attorney is aware of these.

• Short introduction to the topic of court bias against women who make abuse allegations against their husbands, and end up losing custody of their children: https://gwtoday.gwu.edu/familiestoo-family-courts-discredit-women%E2%80%99s-abuse-allegations

• Why Women Lose Custody by Dr. Naomi Cahn, the Justice Anthony M. Kennedy Distinguished Professor of Law and Nancy L. Buc '69 Research Professor in Democracy and Equity at the University of Virginia School of Law.

"How Family Courts Treat Abuse and Accusations of Alienation."

Podcast with Dr. Joan S. Meier, professor of Clinical Law at George Washington University Law School, and Founder and Legal Director of the Domestic Violence Legal Empowerment and Appeals Project (DV LEAP). She is a nationally recognized expert on domestic violence and the law, appellate litigation, and clinical law teaching and has founded programs to provide legal representation, advocacy, and counseling to victims of domestic violence. Professor Meier has co-written several significant pieces of federal and state legislation, and frequently delivers presentations and trainings to attorneys, judges, and professional organizations.

14. —Know What to Do If Your Children Turn Against You

15. —Know the facts about the dangers of fathers with anti-social traits.

Read Other Books by Lundy Bancroft

Why Does He Do That by Lundy Bancroft