Critique: “Divorced: What to Do When,” Focus on the Family article, by Ron Blue, Jeremy L. White 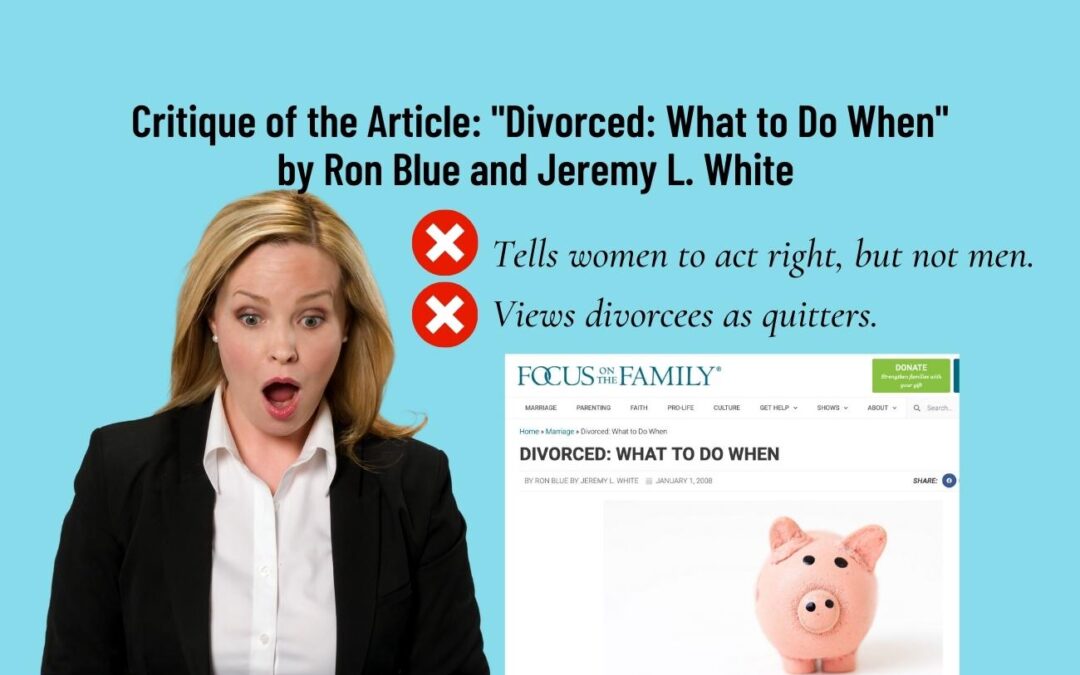 Critique: “Divorced: What to Do When,” Focus on the Family article, by Ron Blue, Jeremy L. White

This is a critique and analysis of the Focus on the Family article, "Divorced: What to Do When," by Ron Blue and Jeremy L. White.

SUMMARY of “Divorced: What to Do When,” Focus on the Family article, by Ron Blue, Jeremy L. White

Summary: There's some good advice in this article, but a lot of problems too. The authors of this article tell women to act right when divorcing but not men, despite the fact that nearly 1 in 3 Focus on the Family website visitors are men. They also broad-brush Christian divorcees as people who don't care about God and don't value marriage, making no exceptions for victims of abuse, betrayal, abandonment, or even pedophilia. They don't acknowledge that one person in the marriage may be choosing to abuse the other person. They also gave incorrect tax advice from 1/1/2019 until 2/23/2022, until it was brought to their attention this week and they deleted it.

Who am I?
I'm a committed Evangelical Christian. I serve, tithe, attend and care about my church and my Lord. I've given thousands of dollars to Focus on the Family. I used to recommend their books. I listened to their broadcasts and got their magazines for many years. I sent my kids on their very expensive overseas Brio missions trips. I've attended conferences at their headquarters and visited their lovely bookstore. I've heard their president, Jim Daly, speak live several times. But I won't give Focus another dime until they condone divorce for domestic violence and stop misleading people about the effects of divorce on children.

They FIXED one problem but left the rest. Although there is some good advice in the original article posted in 2008 (see comments below), a lot of it is misleading.  LINK to the version that was online 2008-2022.

DETAILED CRITIQUE of “Divorced: What to Do When,” Focus on the Family article, by Ron Blue, Jeremy L. White

Focus on the Family created (1) a Facebook post on 2/22/22, and a link to (2) Ron Blue and Jeremy L. White's 2008 article. Notice that the 2022 Facebook post never tells you the tax information is not valid for divorces on or after 1/1/2019, or for prior divorces that were later modified.  See this link to the IRS website. See the second paragraph: https://www.irs.gov/taxtopics/tc452 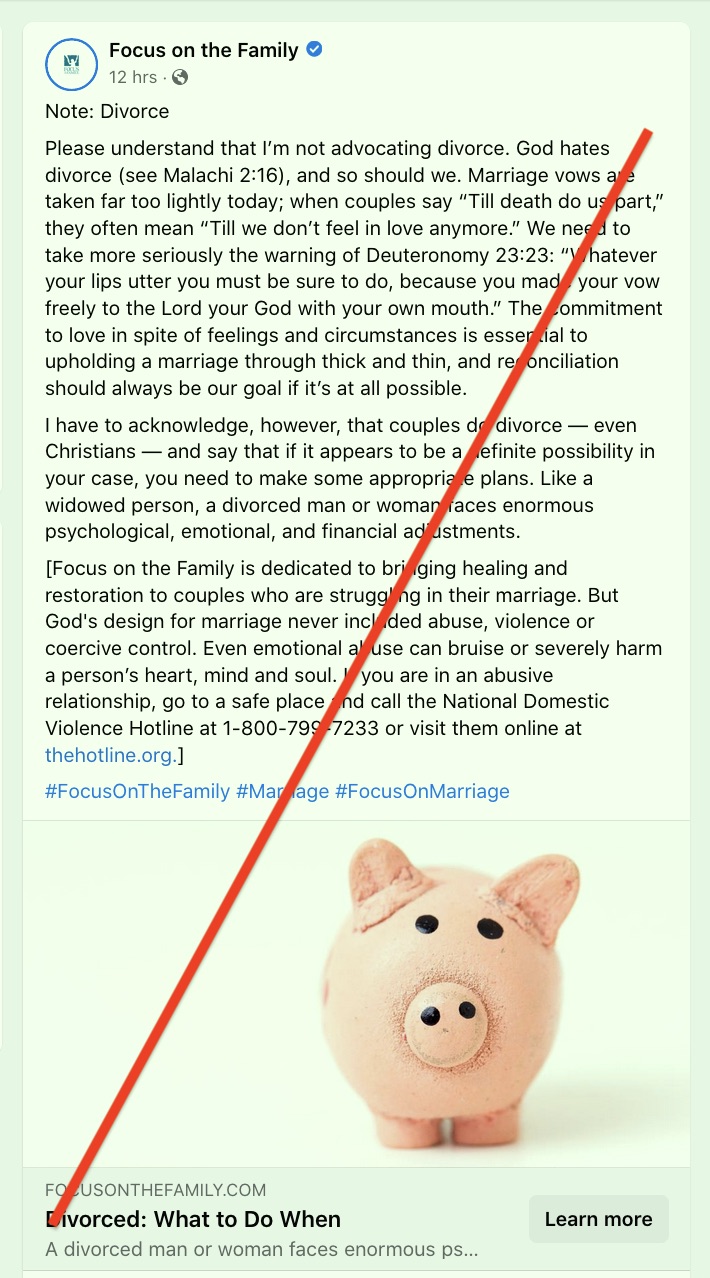 #2—Now Let’s Evaluate the Linked Article (Some better insights in the rest of the article.) 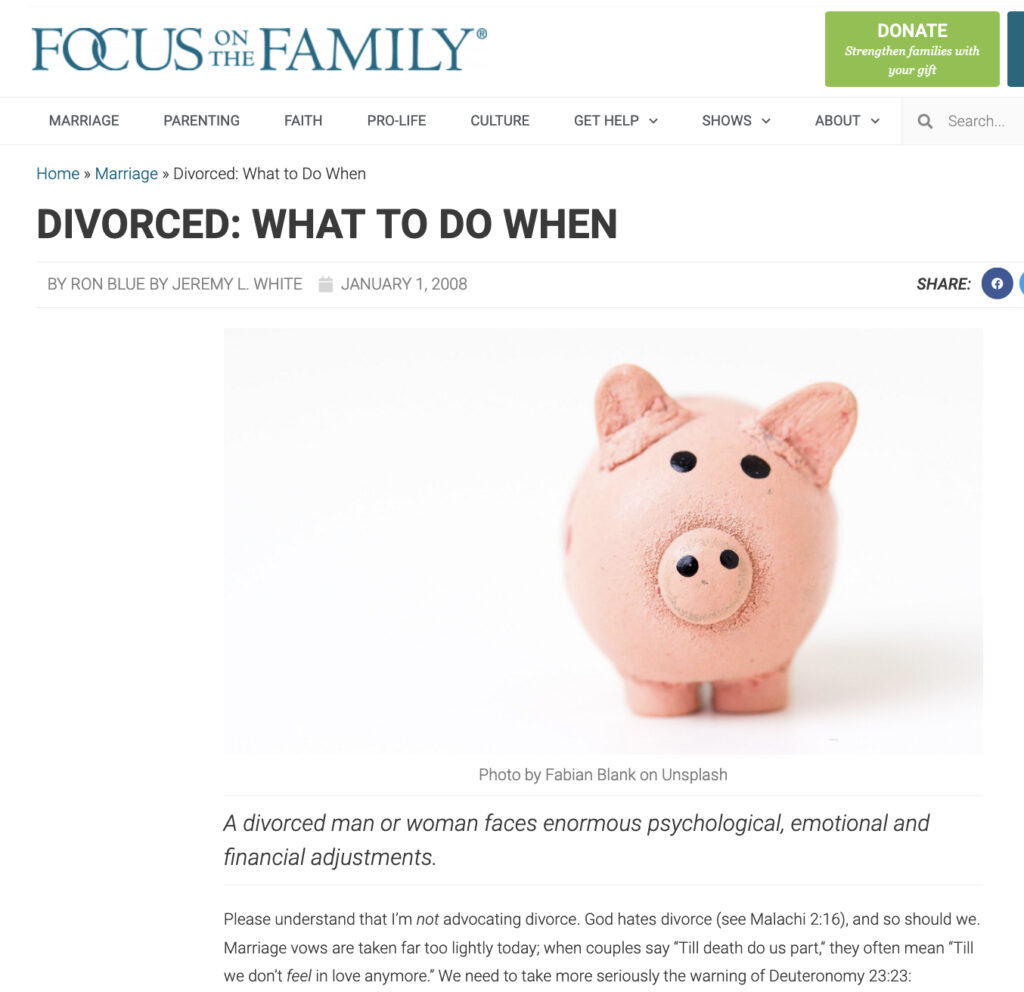 Ron Blue and Jeremy L. White's article on Focus on the Family "Divorced: What To Do When"

There is some very good advice in this article. So let’s start with the pros.

What Are The Cons?

Focus on the Family is an unsafe ministry.

For more examples of their misleading and destructive articles, go HERE.