Turning Point 5: This Really Is Abuse! It’s not Normal Marriage Ups and Downs 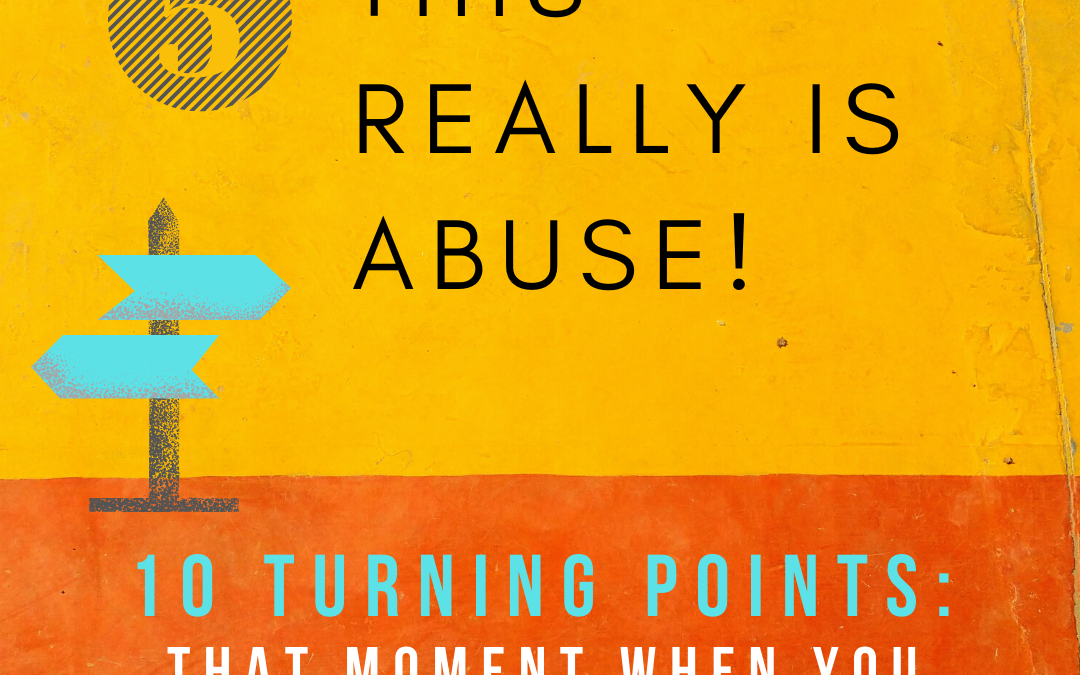 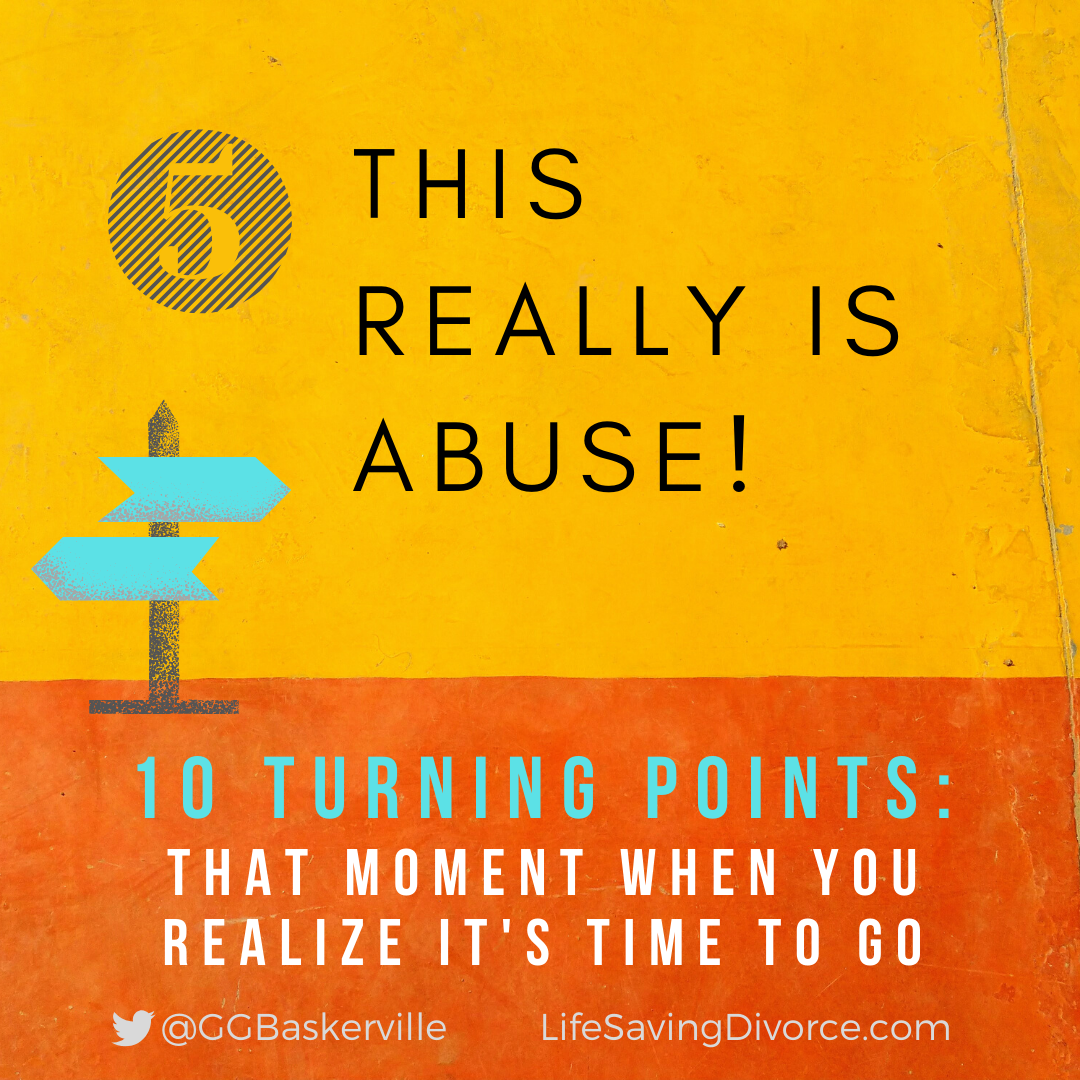 Turning Point 5: This Really Is Abuse! This is not a normal marriage with typical ups and downs + 3 First-Person Stories
Note about this "10 Turning Points" Series: A turning point is that eye-opening moment when you know you must get out of your marriage to save your life and sanity, and your children's. This series is based on my 20 years' experience as a Christian divorce recovery leader, and on interviews with Christians who love God, take their beliefs seriously, yet finally divorced. They hung on longer and tried harder than most people would have. They were in marriages where there was a pattern of adultery, sexual immorality, domestic violence, chronic emotional or verbal abuse, abandonment, or neglect due to addictions. These are the Life-Saving Divorces. My message to people in these destructive marriages is—

Am I Really Being Abused? Or is this just a difficult marriage to someone with problems controlling their emotions?

A lot of people don’t identify what they are going through as “abuse.” They do not see the pattern of indifference, threats, control, and putdowns as abuse. They call it a “difficult marriage.” They blame it on themselves for not being good, submissive, or obedient wives (or in the case of men, on not being godly spiritual leaders).

Not until they read a book—or a pastor or counselor calls it abuse—does the light turn on.

Abuse victims sometimes benefit from seeing a list of examples of abuse, such as the the list of 150 examples in Chapter 4 of my book. For some, they discount emotional abuse because it’s “just words,” not fists. They may not identify physical intimidation (blocking exits, towering over you, pinning you to the wall) as abuse.

One woman said that she was too defensive to accept the word “abuse,” so her counselor gently brought up the subject by talking about “control” instead. She would have shut him down if he had told her she was abused—

My counselor changed my life and made a big impact on me. He didn’t use the word “abuse” but addressed behaviors instead. Everything he said was soft and gentle and kind. “Are you being controlled?”

He knew he couldn’t use the word abuse. He would address behaviors. “It’s not okay for your husband to expect you to clean up, and cook, when you come home from a long drive.” I needed to hear it from a man.

I told him I can only live 50 more years, I’ll just have to get through it. He told me that was a sad way to live. He said, “I’ve been a counselor a long time. The longest I’ve ever seen a marriage this bad survive is 11 years.”

Looking back, it’s plain as day, but at the time, I didn’t know it was abuse.

Another woman told me this story.

I didn’t know I was experiencing emotional abuse. All of these “marriage” books, such as The Excellent Wife, need abuse disclaimers [telling people these teachings are harmful if used with an abusive husband]. However, that isn’t the only answer because being abused was so familiar to most of us that we didn’t recognize it as abuse until we got out. Hindsight is 20/20. Gaslighting blinded me to my own situation. I thought I was suffering for Christ. I have such a heart for victims of abuse now. I’m almost glad I’ve experienced it.

And another woman reported this in her interview.

All those people in my church said, “Oh, that could not have happened to her. She’d have never stayed married to him and had all those children. It must be a lie.” We’d been married almost 30 years.

I heard the song by Casting Crowns, “Thrive,” and the words, “We were made to more than just survive.” And I knelt down in my kitchen and just said, “Lord, something is so wrong, and I do not know what it is. I need you to rescue me.” I was just a shell of a person at that point.

I couldn’t even trust my own perceptions, couldn’t figure out why I was depressed. I just felt like a horrible wife, and he was telling me I was a horrible wife. For him, everything was a competition.

He had to be better at everything. And he would correct everything. I was cutting carrots for a salad one night, and he said, “Well, you need to do this. It’s more efficient.” I said, “I’m not trying to be efficient. I’m just making a salad.”

How could I have missed it? But I was the good wife. I was not going to talk badly about this man. I was going to encourage him. I was going to respect him. You know: Love and Respect. That’s why I checked my brain at the door. I told myself, “It doesn’t matter how the man’s acting. You will treat him as if he’s awesome sauce, even if he’s evil.” That’s the level of denial I will never live in again.

These kinds of contradictory situations are common in abusive marriages. Many people call it “mind-games” or “crazy-making.” For example—

We tend to equate abuse with angry outbursts, threats, or name calling. That isn’t the full story. These incidents come down to one key message: “You are required to fulfill all my needs. But sadly, you are not good enough and will never be good enough. Keep trying… and perhaps someday you will please me.”

1  Part of healing from abuse is making important choices on your own, whether anyone approves or not. You can listen to your instincts and get to safety without consulting others. Also, certain churches are more understanding of divorce than others: For example, “Lutheran (70 percent), Methodist (63 percent) and Presbyterian/Reformed pastors (62 percent) are most likely to believe domestic violence took place if a church member files for divorce and cites domestic violence as a cause. Baptist (49 percent) and Pentecostal (40 percent) pastors are less likely,” according to a 2017 survey done by LifeWay Research (a research organization connected with the Southern Baptist Convention). Retrieved 12/31/19, http://www.bpnews.net/48369/church-response-to-domesticviolence-focus-of-study.