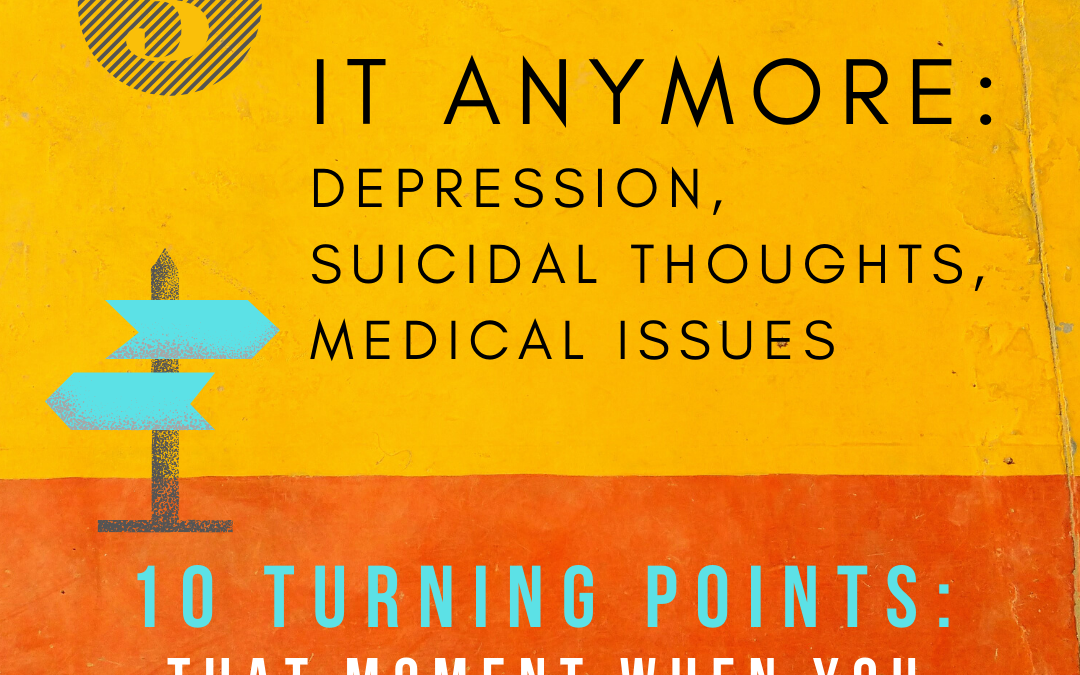 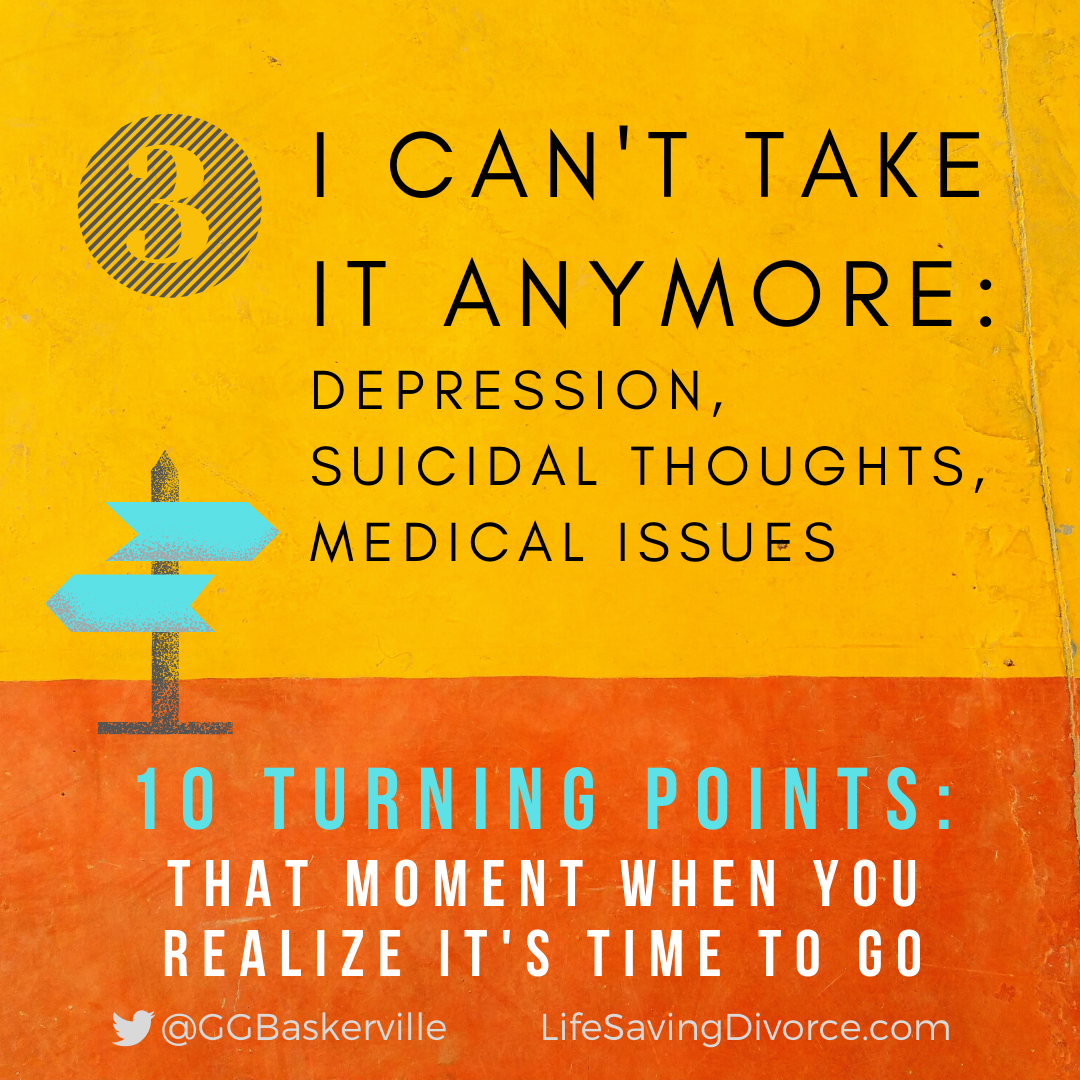 Turning Point 3: My Marriage is Destroying Me. I Cannot Take it Anymore. Depression, Suicidal Thoughts, and Medical Problems
If you are feeling suicidal, you have no hope, and feel like calling it quits, please cal 9-1-1.

Note about this "10 Turning Points" Series: A turning point is that eye-opening moment when you know you must get out of your marriage to save your life and sanity, and your children's. This series is based on my 20 years' experience as a Christian divorce recovery leader, and on interviews of people who love God, take their beliefs seriously, yet finally divorced. They hung on longer and tried harder than most people would have. They were in marriages where there was a pattern of adultery, sexual immorality, domestic violence, chronic emotional or verbal abuse, abandonment, or neglect due to addictions. These are the Life-Saving Divorces.
You can love God AND get a divorce.
And God will still love you. Really.

My Marriage is Destroying Me. I Cannot Take it Anymore. Depression, Suicidal Thoughts, and Medical Problems

When I started the my interviews for my blog and book, I had no idea how much damage verbal or emotional abuse does to people, physically and mentally. Yet many people I interviewed reported physical and mental health problems due to a marriage that had no physical abuse.

It's a story I heard over and over. As you know, I am a lay divorce recovery leader, not a licensed therapist or medical professional. So nothing I write on this blog—and nothing in these interviews—should be considered medical advice for you personally. (Please consult your own physician or other experts for advice about your own situation.)

In the interviews, I listened to many Christian spouses who had grown desperate from abuse, addictions, or infidelity in their marriage. They had finally came to the conclusion they couldn't live another thirty years this way. They had tried everything. They felt trapped, and feared there was no way out. They could not go on. The depression was so deep they were close to suicide.

Many ended up going to the hospital or a psychiatrist—and that saved their life.

One man, we'll call him David, had a wife who was so emotionally abusive and manipulative, he was deep in despair. (His full story is in Chapter 9 of the book.) His church had taught him not to go to professional licensed counselors, only to pastoral counselors (also called nouthetic counselors or biblical counselors). Even though David's pastor was a well-meaning man and a trusted friend, he wasn't trained on manipulation and abuse. He told David to just live with it. David felt trapped and started weighing his options. He asked himself—

“How do I get away with suicide, so the kids don’t know? This is the only way I can get out of my vows without burdening my children.”

His situation got so bad, he was forced to get in-patient treatment with professional, licensed counseling. The counselors caught onto the problem and helped him realize that the messages he had gotten from his home church and Christian books were destroying him.

He had been brought up in a homeschooling group that advocated I Kissed Dating Goodbye teachings as part of his upbringing. And the pastors at his complementarian Sovereign Grace member church told husbands to treat their wife as a queen. They said that if a man’s wife, his queen, isn’t happy, he has failed as a spiritual leader. He must try harder. He must lay down his life for her, sacrificing himself for her as Christ did for the Church, until she feels loved and supported.

The message from his childhood was clear: If you have conflict or she’s unhappy, it’s the husband’s fault. A husband just needs to sacrifice more. David took these teachings to heart. And his wife used them against him.

After the in-patient program, David had a new understanding of these false messages about marriage, and with good coaching, he started setting boundaries, but his abusive wife never did her part to make the marriage safe. When she finally gave up on manipulating him, she filed for divorce. He was at peace with that decision. (He has remarried very happily.)

How Cancer Saved Me!

“After trauma the world is experienced with a different nervous system. The survivor’s energy now becomes focused on suppressing inner chaos, at the expense of spontaneous involvement in their life. These attempts to maintain control over unbearable physiological reactions can result in a whole range of physical symptoms, including fibromyalgia, chronic fatigue, and other autoimmune diseases…”[1]

Paradoxically, that vulnerability and realization that you cannot trust your spouse to care for you if you get sick or injured sometimes gives people the wake-up call they need to see the abuse for what it is.

After many years in an abusive marriage, one woman developed an intense fear of cancer. She developed orthorexia, an obsession about having a healthy diet. She changed her diet dramatically in an effort to avoid cancer. Then one day she found a mole…

And it turned out to be a melanoma. Which is funny, because my biggest fear just came true, and God used it to do the biggest work in my life. It was the best thing that has ever happened to me.

But at the time, I didn’t know what stage it was. It was Thanksgiving, and we were at my parents’[house]. I was crying pretty much the whole day, because my worst nightmare had just come true, and I just didn’t believe it.

At night, my husband came over and said, “Don’t you think you’re being a bit selfish by ruining Thanksgiving with all your crying?”

That was the trigger when the scales just lifted off my eyes. And that’s when I left.

Intense Pain Drove Me to Get Help

One young missionary got married to an American she had met in another country. They became missionaries together.

My clothes had holes in them. My husband was spending our money at strip clubs. I was so depressed. I was diagnosed with fibromyalgia. The physical pain in my body was so high every day, I just couldn’t function. I finally went to another state to a Christian therapy center. They have nutritionists, doctors, counselors, everything.

Several months after the divorce, I stayed with my ex-in-laws. They asked, “Why are you doing so well now? How did you get healthy?”

“I let go of your son. I prayed and prayed to God. I forgave him, and I let him go. I pray now that he comes to God.”

Finally, many of the people I interviewed for this book mentioned they had developed a wide variety of health problems during their marriage that improved dramatically (some, but not all, went away completely) after the divorce. I don’t know of any large studies that compare the physical and psychological health in the same group of people at various points in their life: pre-marriage, marriage, divorce/separation, and five years later.

But we do know that once the stress of the divorce process is over, most adults (7 in 10) turn out emotionally and socially the same or better after a life-saving divorce.

“20% of divorced adults find their lives enhanced,
and another 50% seem to suffer no long-term ill effects.”[2]

Three-in-ten people go significantly downhill emotionally and socially after a divorce. Some of it is due to the trauma from years married to an abuser, or even earlier trauma from childhood. Some is due to high conflict with their ex-spouse during and after the divorce process.[3] Some is due to the normal stress of divorce: handling legal expenses, moving homes, childcare, managing the children’s stress, switching schools, custody issues, conflict with the ex-spouse, financial pressure, and loss of social standing in their community and church.

Nevertheless, seven out of ten people reported feeling the same or better after divorce. Some people even see improvements in their physical condition.

"I was a conservative homeschool mom and a supported Southern Baptist Convention pastor’s wife. [My husband left me, but] I should have left him years ago… My heart palpitations stopped one-and-a-half weeks after he left."

"It’s really amazing how much my health—even my mental and emotional health, as well as my physical health—has improved since separating, which is exciting and also sad, because I think the stress and abuse of the relationship was impacting my health pretty significantly. And I think that’s fairly common for survivors.

I literally grew an inch of measurable height after I separated from my husband. No idea how that happened in my middle-aged years. I’m standing taller both figurative and literally."

Another wife, this one married more than 30 years to a serial cheater and emotional abuser, said,

“I still do have some really serious health issues, which is very typical when you’re in an abusive relationship long term…”

“The one striking exception to the otherwise general rule about postdivorce decline in health were women who had been in distant or hostile marriages.”[4]

And of course, it’s not just women who see improved health after a divorce from a distant or hostile marriage. Men say the same thing:

"My health got better after divorce. I took care of myself instead of walking on eggshells and worrying what was going to blow up next. My kids and I ate better, and I got involved in sports leagues."

"I dropped 15 pounds. My [blood pressure] and cholesterol are normal. They were not when I was married…"

2  W. Bradford Wilcox, “The Evolution of Divorce,” National Affairs (Fall 2009), accessed 1/3/20, https://www.nationalaffairs.com/publications/detail/the-evolution-of-divorce. This is according to E. Mavis Hetherington, landmark researcher in the field of divorce for more than 40 years, as quoted by Wilcox.

4  Hetherington and Kelly, For Better or For Worse, 59.

First-person story of a woman whose husband cheated on her: Adultery, Prayer and the Bible. Find out how the Lord set her free.

The myth that a wife's submission will automatically make her husband love her more.

Bible verses that show that every type of abuse qualifies as biblical grounds for divorce. For a chapter on all the key passages in the Bible on divorce, as well as the Jewish and Biblical background, see Chapter 6.