Book Review: Before You Say “I Do” Christian Premarital Workbook 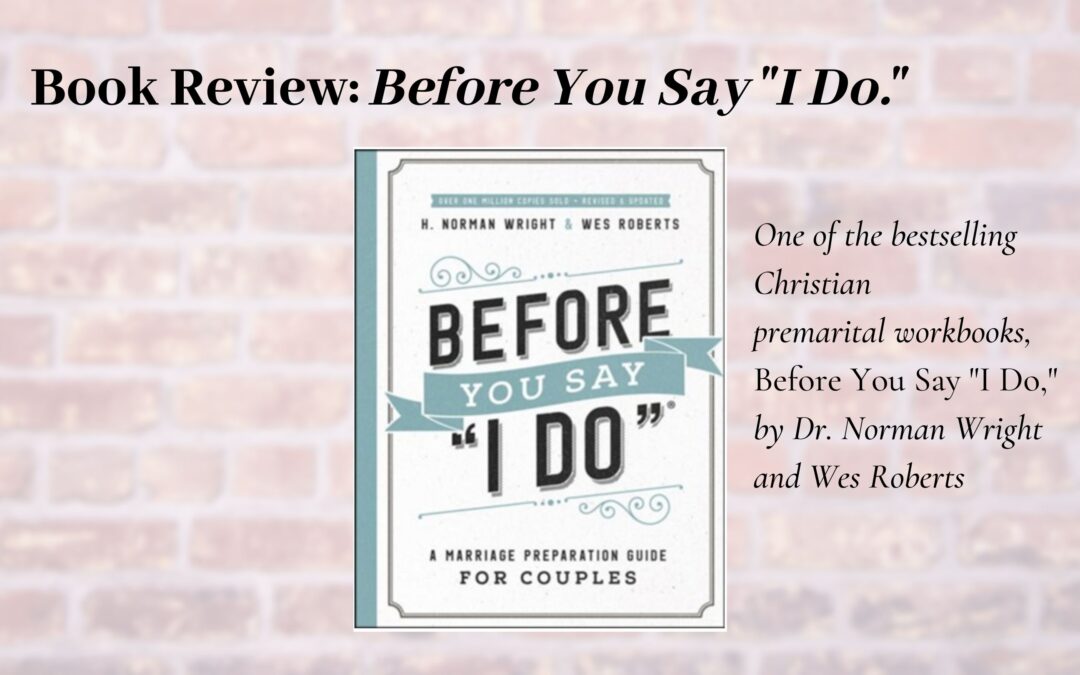 Book Review: Before You Say "I Do," by Norman Wright and Wes Roberts

I went through this Christian premarital workbook 35 years ago, before I got married.

I'm not going to blame it on this book, but Before You Say "I Do" never brings up red flags, or addresses the topic of abuse, addictions, domestic violence, intimidation, sexual deviations, or any other serious problem.

About ten years after my divorce, I found a box in the garage. It had keepsakes from our wedding in the mid-1980s. And one of the items was this fill-in-the-blank workbook we used during our premarital counseling at church. I opened it.

I was curious to see how we had answered the questions and to find out what I had missed. How had I failed to see the danger? Surely there must be something that would explain how I could have married my ex-husband. After all, on the first page of this bestselling Christian premarital workbook, it said it was designed “to help you decrease the risk element in marriage.”

What I saw surprised me: we had answered truthfully, but the topic of dangerous behaviors never came up in this book.

The workbook had a lot of good advice and Bible passages about God’s purpose in marriage, but the examples of marriage difficulties were minor, such as communication problems that almost any kind-hearted couple could solve by listening better, understanding each other’s views and expectations, and compromising a bit.

In the workbook, the word infidelity appeared only once, and the author said that such behavior "would be out of the question" in Christian marriage.

The word domination and the phrase unfair use of anger during conflict came up, but no warning bell was sounded, no advice was given. This wasn’t identified as a serious problem that might warrant cancelling your engagement or seeing a counselor.

An example of being overly controlling with money and questioning all the receipts was mentioned, but the comment was mild: “This is not how to start a marriage.”

Why didn’t the author say more? Intimidation, domination, and control are serious red flags for domestic violence, but the book did not raise a warning. Shouldn’t a premarital book do this?

The words adultery, lying, cheating, betrayal, gambling, pornography, and addiction didn’t appear in the premarital workbook at all. Nor did words such as abuse, slap, hit, push, or fight.

The only mention of substance abuse was an example of an alcoholic who one day stopped cold turkey and had a complete life change at the request of his spouse, along with the comment that that this change might happen in your marriage!  The opposite and far more likely scenario—where a spouse gets arrested for drunk driving, functions poorly, has mood swings, may be violent, loses jobs, or spends the vital family resources on drinking—was never addressed.

The workbook never brought up risky behaviors: abuse, adultery, prostitution, chronic lying, drug addiction, gambling, battering, child sexual abuse, or other behaviors that would destroy the trust in a marriage and jeopardize its future. There was no instruction to break your engagement or even to get counseling. It was as if these marriage-endangering problems didn’t exist in anyone you might meet at church. And when “undesirable behaviors” did crop up, the readers were told they could “learn to adjust.”

At one point the workbook said, “The best way to help another to change is to make changes in your own life,” but it never gave any suggestions of how you might do that. It never mentioned that one option might be to stop “adjusting” and “compromising,” and to draw a line in the sand. It didn’t say anything about requiring better behavior and possibly cancelling the wedding.

I had married a man in my church’s singles group who wasn’t trustworthy: someone with a sexual addiction.

Finally, as I read through our answers in the workbook, I realized:

This workbook assumed every Christian was

a person of good will who had their spouse’s best interests at heart.

I was shocked and closed the workbook. (By the way, I bought the latest edition of H. Norm Wright and Wes Roberts’s book Before You Say “I Do,” just to see what the authors had changed, but didn’t find much. Every word and illustration I mentioned above exists (or does not exist) in today’s Kindle version of the book.

Before You Say “I Do” was full of premarital topics, but it did not address the red flags, outline the risk and likelihood of dangerous marriages, or recommend ending an engagement in such cases. How was this possible, when the Bible warned us about the existence of abusers, cheaters, swindlers, and deceivers in our churches and told us not to associate with such people (1 Corinthians 5:11 & 2 Timothy 3:1-5)?

There are better books out there to prepare Christians for safe marriages.

All of these are written by Christians for Christians, except the first one. This page includes Amazon affiliate links. 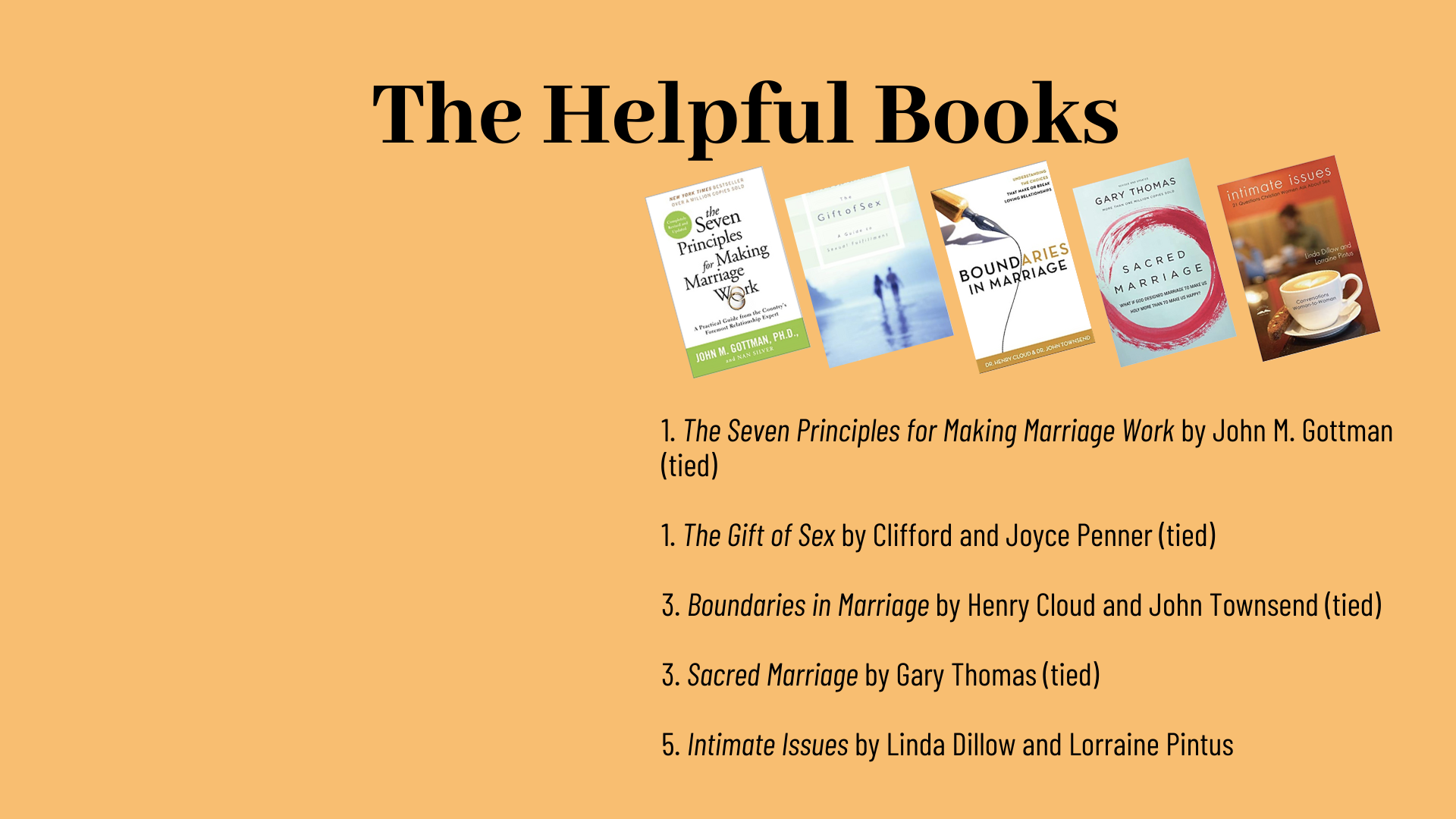