Myth 6: You’re Lying: We’d All Know If Your Spouse Was That Bad 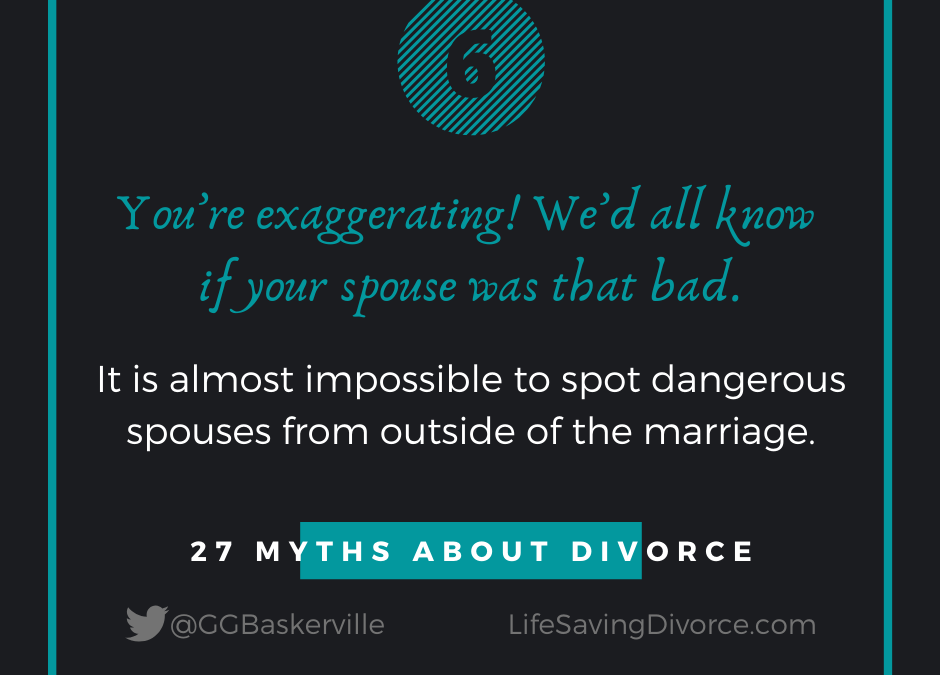 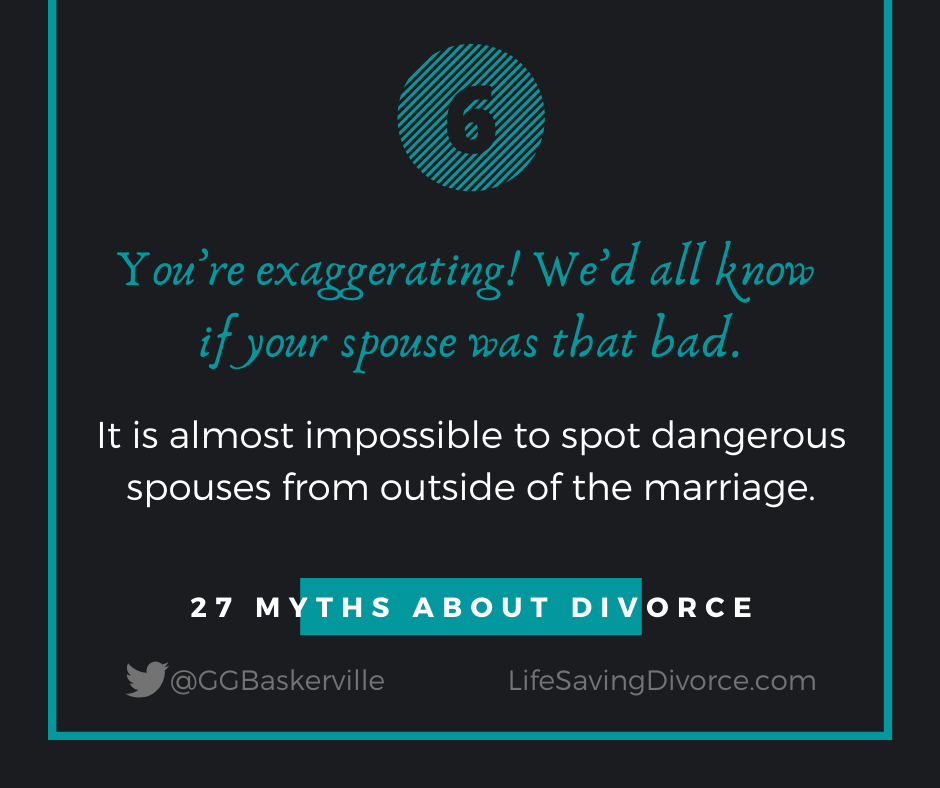 This is Myth 6 of 27 Myths about divorce that aren't likely to be true of people who love God and take their faith seriously. These messages make us worry if we're pleasing God. They contain little accusations that our motives aren't right. They make us second-guess ourselves when we try to get ourselves and our children to safety. Many of us have heard these messages all our lives and wanted to avoid them.  So although these myths may be true for people who are selfish or immature, they aren't true for a person who invested their heart and soul into the relationship, even when the other person didn't.  See all the myths on one page. See the next myth.

Myth 6: You Must Be Exaggerating!
Everyone Would Know If Your Spouse Was THAT Bad.

TRUTH: It is almost impossible to spot dangerous spouses from outside of the marriage.

This myth says that abusers, cheaters, and sex offenders are easy to spot. You can tell just by hanging out with them. If it’s not obvious to everyone, you must be wrong.

Abusive people do not show their abusive side in front of bosses, friends, or people they want to impress. They rarely beat or torment their spouse or children in front of two witnesses, a video camera, or an audio recorder. They are clever. Abusers don’t want to be caught, and often the victims say nothing in hopes that the person will change, or out of fear no one will believe them.

Some abusers—especially in religious circles—are friendly and charming in front of others, but turn into the opposite behind closed doors. One woman described her husband as Dr. Jekyll-and-Mr. Hyde: He was a man who would go out of his way to help people stranded along the road by fixing their flat tires, but he would viciously attack her when he got home, satisfying his violent temper without compassion or remorse. “I knew no one would believe me if I told them he was abusive,” she said. It took her years to get out.

This is part of Chapter 3 in The Life-Saving Divorce. For more on this topic, including many wonderful first-person stories, read the book.

Is divorce the unpardonable sin? Does God "hate divorce"?  (No, life-saving divorces are not sinful. The Bible permits them.)

Will my children be destroyed by divorce? (No.)

What are the 27 Myths of Divorce that don't apply to committed Christians?

Are most divorces for just "falling out of love"?  (No.)

Will your divorce really "shatter the image of Christ and the Church"?

What are the best books on domestic violence, infidelity, and emotional abuse?

What are the 5 types of abuse?

Where can I get the book?  Amazon Paperback or Kindle   Non-Amazon: PDF or ePub