Myth 23: You Can’t Divorce Your Spouse, Because They Don’t Know Any Better 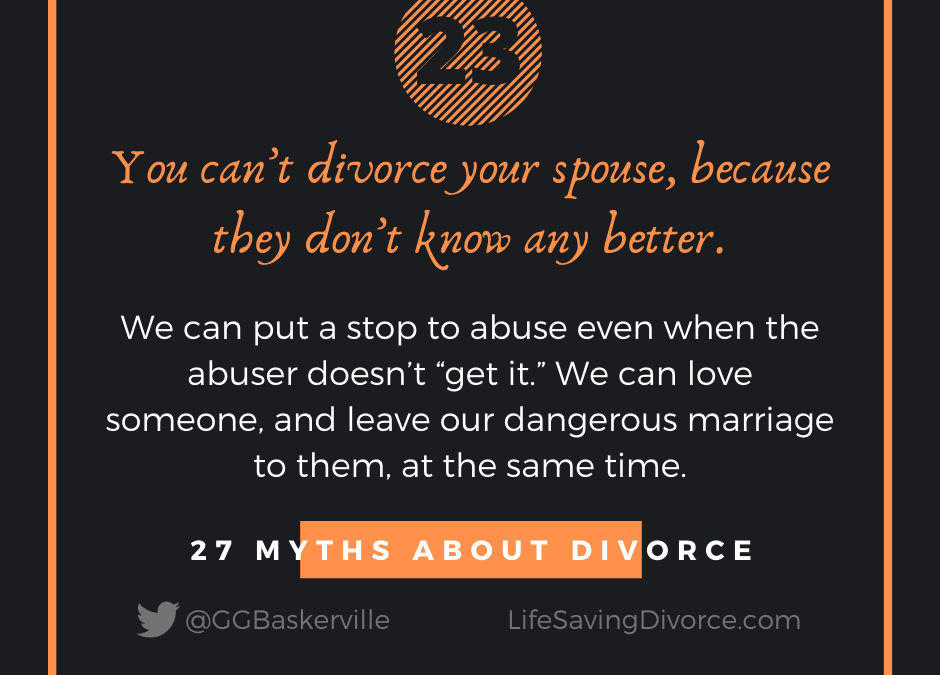 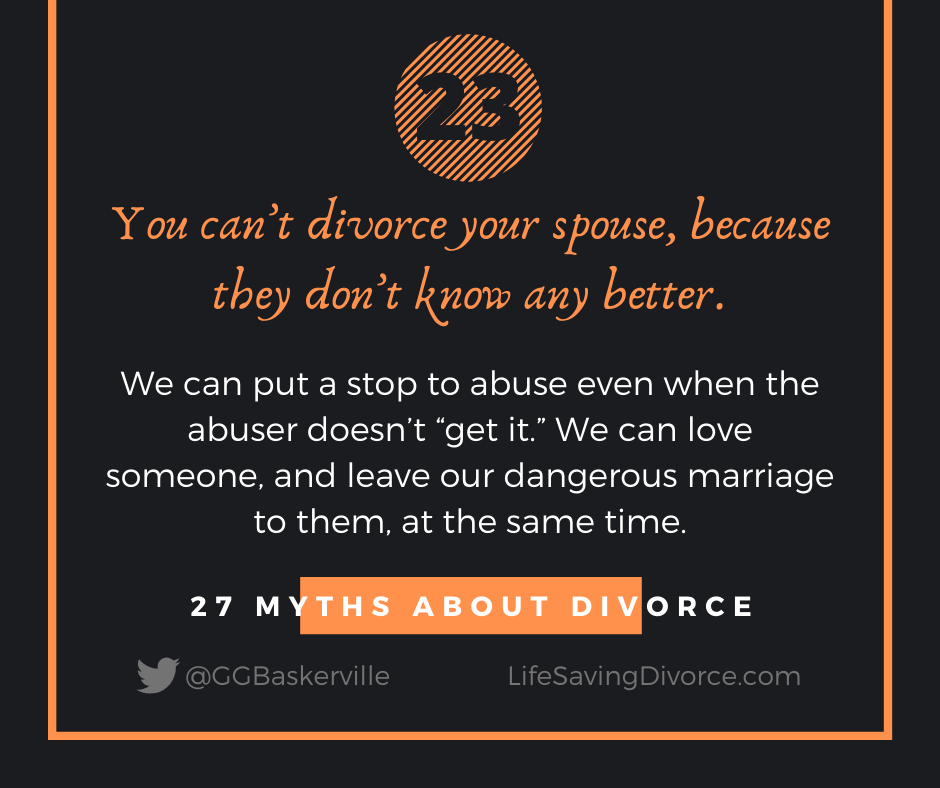 Overview: This is Myth 23 of 27 Myths about divorce that aren't likely to be true of people who love God and take their faith seriously. These messages make us worry if we're pleasing God. They make us second-guess ourselves when we try to get ourselves and our children to safety. Many of us have heard these messages all our lives and wanted to avoid doing wrong. So although these myths may be true for people who are selfish or immature, they aren't true for a person who invested their heart and soul into the relationship, and gave it all they had. See all the myths on one page. See the next myth.

MYTH: You can’t divorce your spouse, because they don’t know any better. They aren't deliberately or intentionally destructive.

TRUTH : We can put a stop to abuse even when the abuser doesn’t “get it.” We can love someone, and leave our dangerous marriage to them, at the same time.

Many of us married spouses who were abused or abandoned as children. Or they experienced a lot of trauma. We were taught that our love and hope would fix our spouse, and someday they would understand what real love is like, and become better people. We found it hard to believe that people could be cruel deliberately. (Yet we had to face the fact that they weren't cruel to everyone: they knew how to turn it on and off.) It was hard for us to face the reality that someone we love was abusive. We wanted to continue to see them as worthy of love. We want to think the best of them. We blamed it on their parents, or on their addictions, or on their hunger for love and approval.

So we ask ourselves, “Does my spouse really intend to be abusive? Do they know they’re being abusive? If I could just make them understand, surely they would stop!”

Though these questions can torment us for a long time, in the end, they are beside the point. Maybe the abusive spouse understands perfectly, and they’re causing that pain anyway. Maybe they don’t understand and are blind to their own behavior; maybe they came from an abusive home themselves, and this is all they know. Or maybe they have a genuine mental illness.

Either way, the abuse is real—it’s happening—and it is completely unacceptable.

That is what matters. That is why a life-saving divorce is necessary. For some of us, it is important to believe the best of our spouse, and we don’t want to consider that they are being deliberately, knowingly cruel, so we cling to this myth: Because our spouse doesn’t “get it” and “doesn’t know any better,” we are not allowed to divorce them. We have to stay, letting them abuse us, and trying to make them understand. Leaving, we think, would be unloving. It would be “giving up” on them.

But that’s not true. And we don’t have to choose between leaving and loving. We can do both. We can still believe the best of them, giving them the benefit of the doubt, and get a life-saving divorce. Why?

Because sometimes people are doing their best, and their best is dangerous.[1]

Abusers are as worthy of love as all the rest of us—after all, we are each made in the image of God. But when you are being abused, getting yourself out of your abuser’s power is not unloving, and it doesn’t mean that your spouse is unworthy of love. It also doesn’t mean that you need to blame or hate them, or that you need to believe that they are a monster or an evil person.

It just means that your marriage together has turned dangerous and needs to end.

Here is the testimony of an overseas missionary couple. The husband gradually became more and more unstable and scary. After more than 10 years of marriage, the husband was diagnosed with a mental illness, Paranoid Personality Disorder. He had become aggressive and dangerous.

You can have compassion for your spouse and still leave a destructive marriage. In such situations, love says a loud, resounding NO, and gets out of there!

[1]  My editor pointed this out and credited Brene Brown for this concept.

10 Turning Points: What is the "Last Straw" for Most Devout Christians. See One, and Two, and Three.

For an entire chapter giving example of types of abuse (physical, emotional, sexual, financial, and neglect), including many first-person stories, read Chapter 4 in the Life-Saving Divorce. As an Amazon Associate I earn from qualifying purchases.

For more on these 27 myths, read Chapter 3 in The Life-Saving Divorce.  To see all 27 myths on one page click HERE