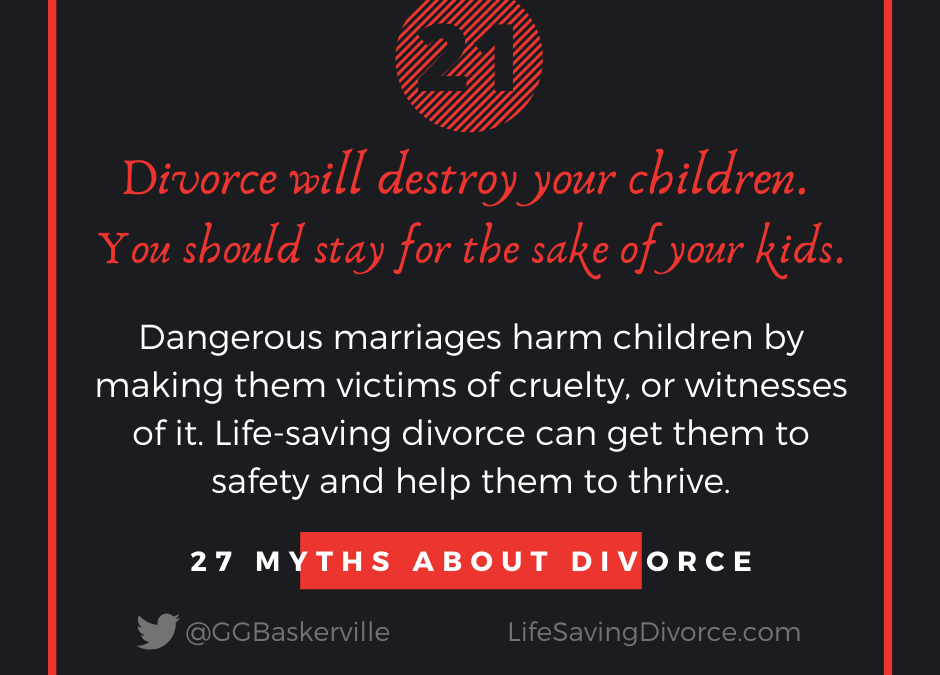 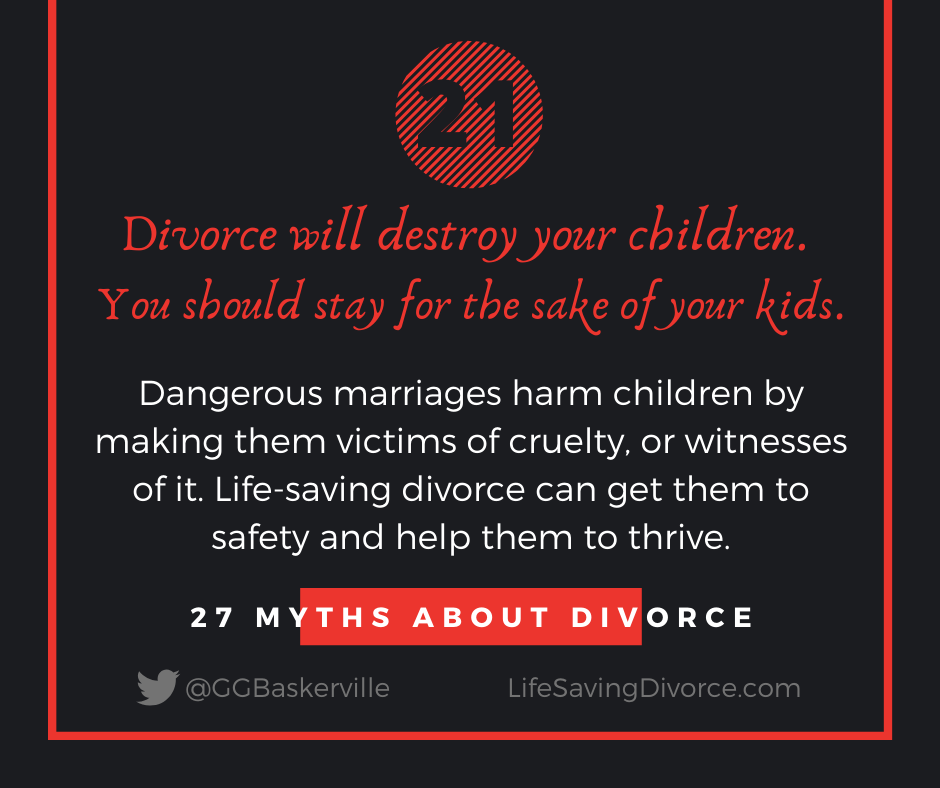 Overview: This is Myth 21 of 27 Myths about divorce that aren't likely to be true of committed Christians who love God and take their faith seriously. These messages make us worry if we're pleasing God. They make us second-guess ourselves when we try to get ourselves and our children to safety. Many of us have heard these messages all our lives and wanted to avoid doing wrong. So although these myths may be true for people who are selfish or immature, they aren't true for a person who invested their heart and soul into the relationship, and gave it all they had. See all the myths on one page. See the next myth.

MYTH: Divorce will destroy your children. You should stay for the sake of your kids.

TRUTH : Dangerous marriages harm children by making them victims of cruelty, or witnesses of it. Life-saving divorce can get them to safety and help them to thrive.

This myth is often used to warn spouses that their divorce will destroy their children by causing irreversible harm emotionally, making them fail in school, and causing them to have more drug and alcohol problems. It says that a two-parent home is always better than a single-parent or stepparent home.

But this is not true. Often, abusive two-parent homes are worse.

A safe home where the two parents don’t have much conflict is indeed best for children. Warm, encouraging, yet firm parents are very important to children’s outcomes. But this isn’t the case in homes where there is ongoing bad behavior such as abuse or sexual immorality. In these destructive homes, there is lying, deceit, manipulation, mind-games, and false accusations, which are very damaging to children. Kids need to understand what a good marriage looks like. And it doesn't look like this.

In high-conflict homes, where bad behavior causes tension or violence, children have much higher odds of dropping out of high school, earning poor grades, smoking, and binge drinking. They are also much more at risk for early sex, out-of-wedlock pregnancy and/or childbirth, and separation and/or divorce.

Children raised in these bad-quality, high-conflict marriages are no better off than those brought up in single-parent families (even when the single parent is poorer than before), and in some areas, they are far worse![1] Even substance abuse—which, fortunately, is rare for kids and teens regardless of their background—doesn’t happen to children of divorce much more than it does to children in two-parent homes.

Researchers have found similar good news about emotional trauma in situations of divorce.

Traditionally, society has taught that divorce is very harmful to children and that children of divorce have negative short-term and long-term emotional consequences. (See Chapter 7 for several studies that show your kids are likely better if you leave an abusive, high-discord marriage.)

“In the short run, divorce is brutally painful to a child. But its negative long-term effects have been exaggerated…

“Twenty-five percent of youths from divorced families in comparison to 10 percent from non-divorced families did have serious social, emotional, or psychological problems. But most of the young men and women from [the study] looked a lot like their contemporaries from non-divorced homes. Although they looked back on their parents’ breakup as a painful experience, most were successfully going about the chief tasks of young adulthood: establishing careers, creating intimate relationships, building meaningful lives for themselves.”

In most cases, divorce does not ruin kids’ chances in life or traumatize them forever. But being exposed to chronic abuse and conflict for years could very well do just that! Many Christians who filed for divorce said:

"I did not want my kids to think this is ok and a “normal Christian marriage”. I would never want my sons to treat their wives like that or my daughters to believe they should put up with it."

Kaiser Permanente did a large study in 1998 that showed the health effects of adults who, as children, were abused or had witnessed their mother being abused, or had lived in a household with substance abuse.

They found that children who’ve been abused or exposed to abuse are at a higher risk when they become adults for major diseases such as ischemic heart disease, cancer, chronic lung disease, skeletal fractures, and liver disease. If children had been exposed to four or more of following seven categories listed below, their health as adults was likely to be affected.

The more categories they had been exposed to, the higher their risk, including increased health risks for alcoholism, drug abuse, depression, and suicide attempts.

For more than 20 years, researchers have known that watching or experiencing abuse is terrible for kids. In many cases it causes severe emotional and physical health problems.

When is Divorce Good for Kids?

This graph shows five types of marriages and how children turn out (on average) after divorce.[3] I'll explain it below.

The worse the marriage, the better off the kids will be if you divorce.

(The reverse is true too: if the marriage is very low conflict and both people are decent and fair-minded and conflicts are actually resolved rather than being swept under the carpet, divorce is really bad for kids.)

In fact, in a very high distress marriage, children were damaged 10 times more if the parents stayed together than if they divorced.

According to this study, even in a high distress marriage the kids were damaged one-and-a-half times more when the parents stayed together rather than divorcing. 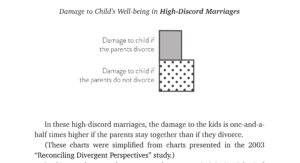 (For a longer explanation, see p. 251-252 in The Life-Saving Divorce. For a link to the abstract to the study click HERE. The full study is behind a paywall, which you can purchase, but if not, the abstract still summarizes the point. See bottom of that page in the rectangular box.)

Researchers have known for more than 20 years that divorce is likely best for kids in high distress and very high-distress marriages. (But no one told us that. Why didn't Focus on the Family say something?)

The simplest way to summarize these graphics is:

Divorce can be good for kids OR it can be bad.

No one told us this. So it's not your fault if you stayed in an abusive marriage "for the kids." We were given inaccurate information.

So we did what we were told. But we weren't given the right information. It was available, but no one told us. In fact, to this day there are multiple articles on the Focus on the Family website that don't mention the distinction. And it's confusing to me! After all:  Focus was founded by a genuine PhD child psychologist who taught at a major university. How could he not have known? And if he knew, why didn't he tell us?

To summarize: Divorce can be a gift from God to parents and children in bad situations. You can love your children AND get a divorce. In fact, in some cases it's the best option.

If there’s a fire—pull it! That’s what it’s there for.

3  These graphs were adapted from the Parents’ Marital Discord chart in Paul Amato, Reconciling Divergent Perspectives: Judith Wallerstein, Quantitative Family Research, and Children of Divorce,” Family Relations 52, no. 4 (10/03): 332-339, accessed 03/09/19, https://www.jstor.org/stable/3700314. For those wishing to learn more, this is one of the most interesting and highly detailed comparisons of “staying” versus “leaving” and the effect on children.

For an entire chapter on children and divorce, including quotes from the top experts and many important studies, read Chapter 7.

Regarding Focus on the Family: I've listened to FOTF's radio program since the 1980s. I bought a lot of Dobson books. It was one of my favorite shows. I supported Focus financially for many years. I gave thousands of dollars in donations. I sent my kids on their BRIO missions trips, twice! But FOTF is giving mixed messages to marital abuse victims. Despite having some good radio guests who address abuse well, their website fails to mention that many of the researchers they quote are actually in favor of divorce in cases of high-distress homes. In my opinion, their ministry is not safe.

People contact me and tell me story after story of spending roughly $3000-$5000 on Hope Restored marriage intensives only to realize their home was no safer as a result. In fact, they reported that the abusive spouse took the communication skills they learned, and used them to discover more ways to abuse, manipulate, and control their spouse! I have asked abuse victims for proof that they actually attended and was sent a lot of evidence. I believe them.

For the story of one mother who stayed in an abusive marriage and was nearly killed after reading a Focus on the Family newsletter, see p. 322 of The Life-Saving Divorce. This woman gave me evidence of having attended their marriage intensives three times. She is happily divorced today: She and her children are safe at last. She loves the Lord, but would never send anyone to a Focus marriage intensive. In her opinion, they are unsafe.

For a definition of life-saving divorces, read this blog post. What is a Life-Saving Divorce?