Myth 20: If You Are Godly, You Can Marry Any Christian and It Will Work 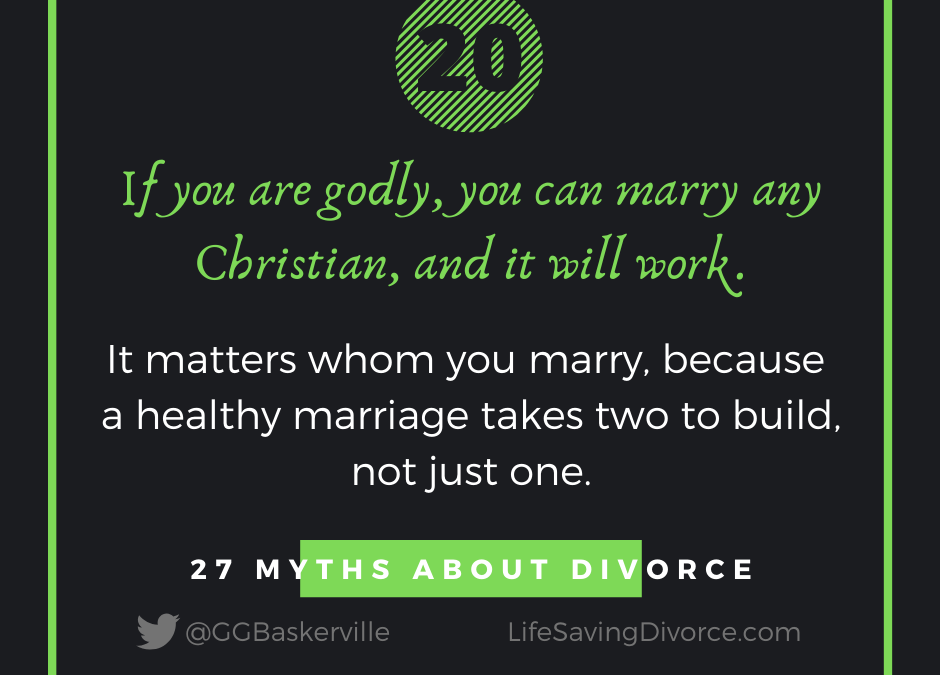 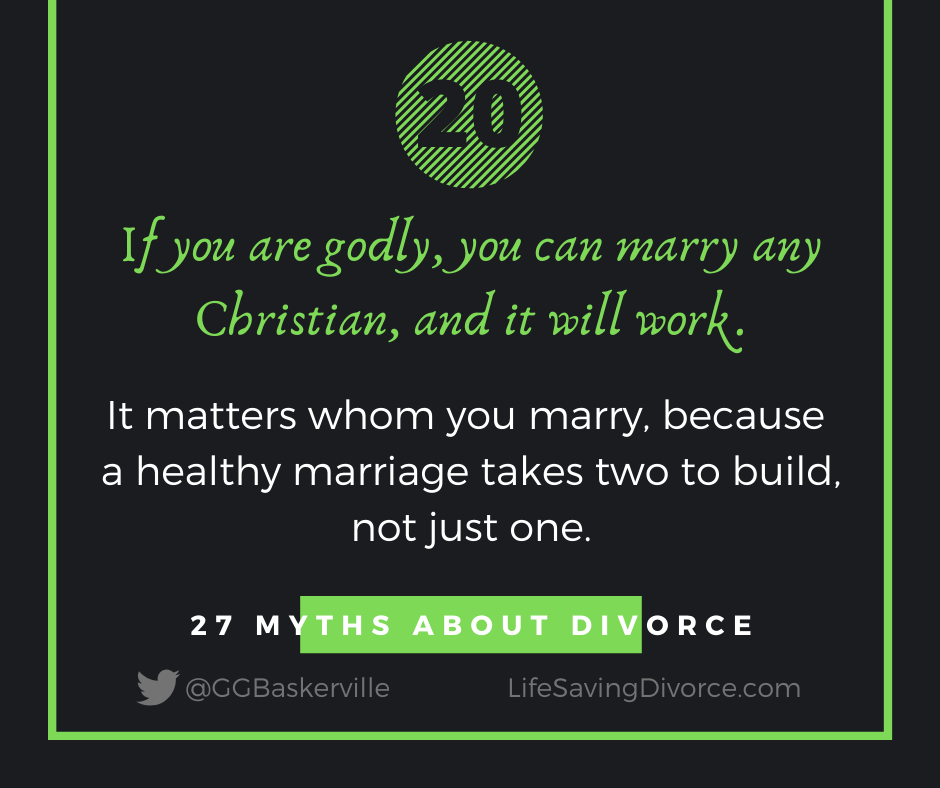 Overview: This is Myth 20 of 27 Myths about divorce that aren't likely to be true of committed Christians who love God and take their faith seriously. These messages make us worry if we're pleasing God. They make us second-guess ourselves when we try to get ourselves and our children to safety. Many of us have heard these messages all our lives and wanted to avoid doing wrong. So although these myths may be true for people who are selfish or immature, they aren't true for a person who invested their heart and soul into the relationship, giving it all they had. See all the myths on one page. See the next myth.

MYTH: If you are godly, you can marry any Christian, and it will work.

TRUTH: It matters whom you marry, because a healthy marriage takes two to build, not just one.

This false teaching is often foisted on both young men and women. For guys, it’s another prosperity gospel formula: If you are a godly spiritual leader, you can marry any Christian woman, regardless of her personality and character, and your life together will be happy. Put her on a pedestal, and everything will be smooth sailing. What could go wrong?

The truth is that character matters, and cultivating a healthy marriage takes two people’s efforts, not just one. In my interviews, I find loving, godly men and women who marry selfish, manipulative people; one spouse’s godliness doesn’t magically make the marriage work.

Marriage Vows Are about the Basics

I would like you to be free from concern.

As people mature, some do become better spouses who meet the basic responsibilities of the household and marriage:

It is not about keeping up with your friends and neighbors. It isn’t about the type of house or car you have, or your career success. This is not about getting rich, finding your soulmate, healing all your emotional wounds, or winning the “wife of the year” or the “husband of the year” award.

But some people either cannot or will not keep their vows.

People who can’t manage the basics are not safe to marry.

Rather than treating their spouse fairly, they treat them like the enemy or in some cases, like they are entitled to get whatever they can. They aren’t faithful or supportive. They don't meet, or even refuse to meet, the basic needs of their spouse for food, clothing, and affection. They show disrespect and disdain, and they do violence. Their selfish desires trump their marriage vows. Sometimes it's deliberate, but sometimes it's due to their own trauma, addictions, or emotional problems.

A marriage is a partnership, and like any partnership, betrayal can destroy it, it doesn't matter whether it is deliberate or not. A person who does not or cannot hold up their end is making the marriage one-sided.

Picture marriage as a two-person canoe—it cannot get where it’s meant to go unless both people are paddling. If one person paddles while the other one drags the anchor, or only one person is making loving, cooperative efforts, while the other is cheating, abusing, lying, using drugs, or behaving dangerously, the marriage cannot work.