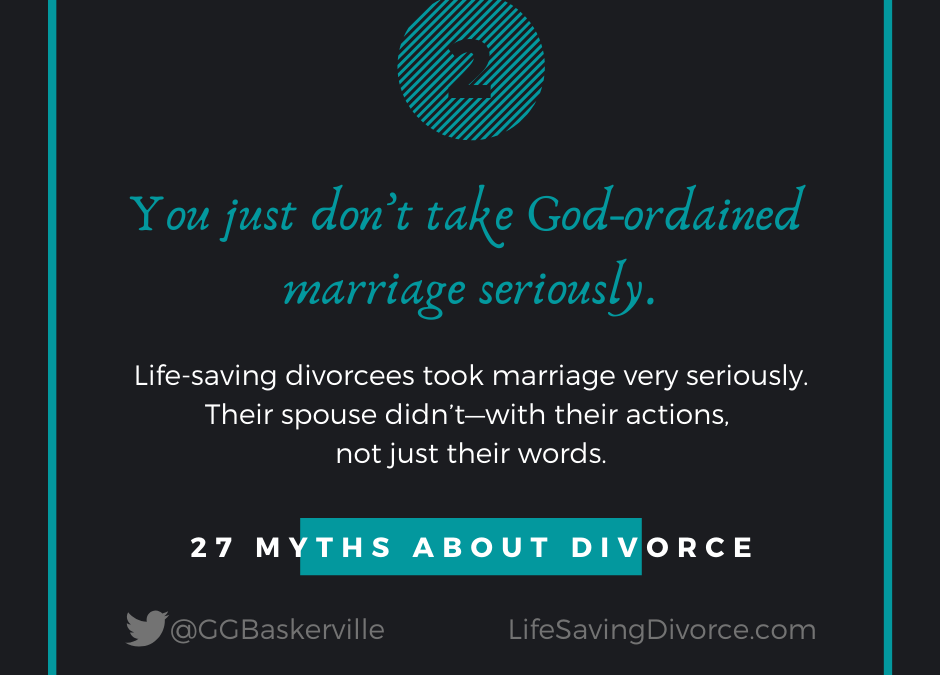 This is Myth 2 of 27 Myths about divorce that aren't likely to be true of Christians who love God and take their faith seriously.  So although these myths may be true for people who are selfish or immature, they aren't true for a person who invested their heart and soul into the relationship.  See all the myths on one page. See the next myth.

TRUTH: Life-saving divorcees took marriage very seriously. Their spouse didn’t—with their actions—even if their words claim they did.

This myth says all divorce happens because people just aren’t committed these days. They don’t take their marriage vows seriously. They don’t want to do the hard work to keep their promises made before God, simply because they just don’t feel like it. People are quitters. They want the easy way out. And while this may be true of some people who divorce, it doesn't describe the nearly 50% of divorced people who needed a life-saving divorce, according to researchers.

Maybe you've heard other versions of this myth:

But this myth is not true of people who need life-saving divorces. Most of them were committed to their marriage vows; they took their responsibilities seriously; and they believed in the sanctity of marriage. If brought up in a Christian home, they were told, nearly from the day they were born, that their path would include marriage, as the highest good. They entered their marriage with dedication, commitment, competence, and the determination to go the distance.

They invested in the marriage, expending time, energy, money, and emotion into making the home a nurturing place. But their spouse chose to be abusive or to cheat—and in doing so broke the sanctity of the marriage. While one spouse was setting up counseling appointments, begging God to heal their marriage, trying to keep the house, trying to keep a roof over their head, and doing everything to avoid conflict, the other spouse took advantage of the situation.

Granted, many spouses appreciate the effort their partner puts in and express gratitude for it. And they too expend energy to make the home loving and safe.

But where there's abuse and betrayal, the badly behaved spouse feel entitled to having their cake and eating it too. So while the invested spouse is bending over backward, praying, fasting, trying to be more forgiving, and more sexually available, the other one was cheating, being cruel and manipulative, and hoping the responsible spouse wouldn't notice, or if they did, wouldn't say anything. As one woman explained it—

"And what if, despite the years of prayer and hanging in there and trying to save your marriage and fixing it, your spouse would rather not be changed, because it all works very well for them?" —Leonie Ozemoya

Think about it this way. If that innocent spouse hadn’t been committed to their marriage, hadn’t wanted it to be lifelong, and hadn’t been optimistic about change, they would have exited at the first sign of abuse or betrayal or neglect. Abused spouses, de facto, are the ones who took their vows seriously and thought they could fix the marriage.

An abuser or cheater
forfeits the right to remain married.

If you did the hard work to save the marriage, while your spouse exploited your generous nature, say to yourself:

Divorce is not evidence of moral decay.
Turning a deaf ear to abusive or unfaithful marriages is