Myth 12: Your Marriage Would Be Great if You Just Submitted More 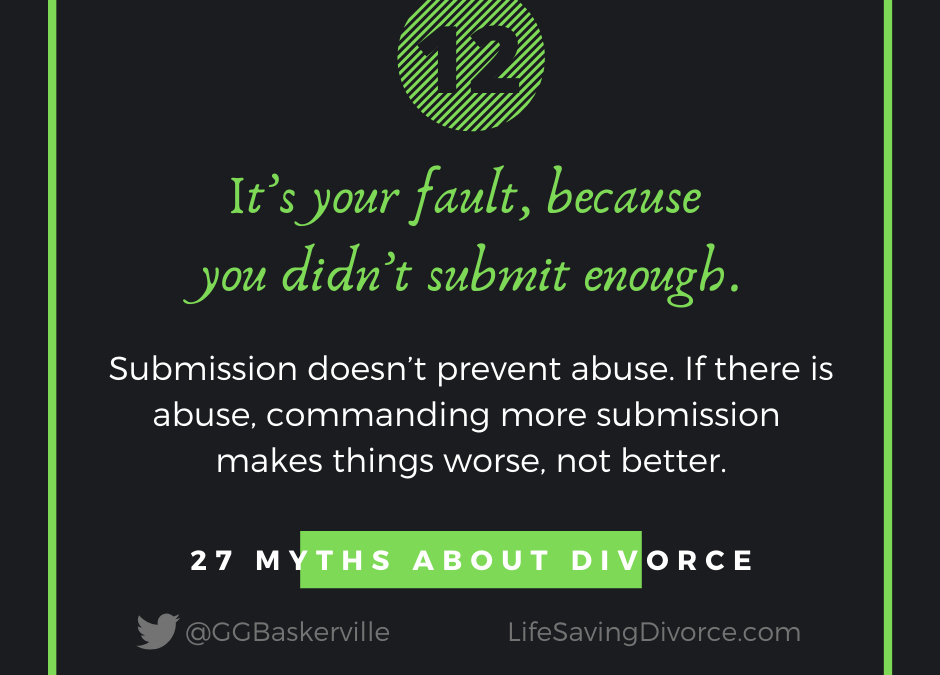 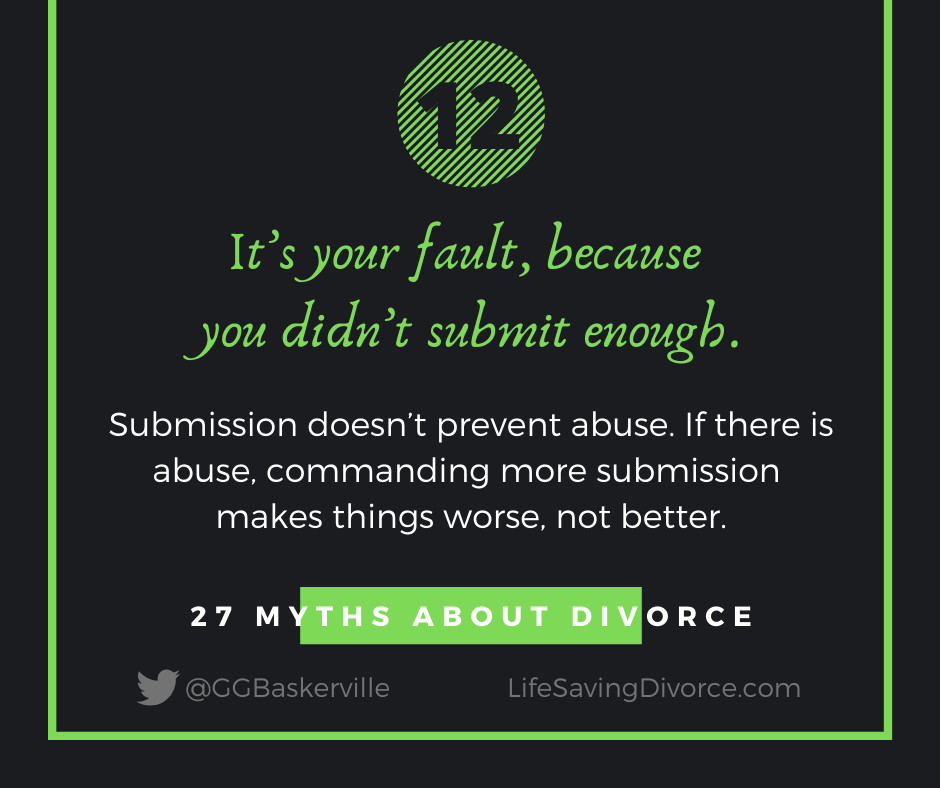 Overview: This is Myth 12 of 27 Myths about divorce that aren't likely to be true of committed Christians who love God and take their faith seriously. These messages make us worry if we're pleasing God. They contain little accusations that our motives aren't right. They make us second-guess ourselves when we try to get ourselves and our children to safety. Many of us have heard these messages all our lives and wanted to avoid them.  So although these myths may be true for people who are selfish or immature, they aren't true for a person who invested their heart and soul into the relationship, even when the other person didn't.  See all the myths on one page. See the next myth.

MYTH: It is your fault, because you didn’t submit enough.

This myth, used almost exclusively against women, says your marriage is in trouble because you aren’t a submissive wife. If you did everything your husband wanted, your marriage would be great.

Women who have been taught this myth and internalized it often become trapped in dangerous marriages; they believe that the Bible says women must submit to their husbands in everything and always put his preferences and desires first, obeying him no matter what. Some wives have been taught that headship means that only the husband can make major decisions—or in some cases, all decisions.

I was better with money than he was, but I still didn’t give my opinion about all of the financial decisions, because I thought it was my role to be submissive.

We got into financial trouble. He was desperate for my advice, but my [faith tradition’s] teaching didn’t allow me to give it. I made him decide. Only his vote for restaurants mattered. I gave up having an opinion.

[We were taught that godly wives] make their husbands make all the decisions and then blame him for the results.

She was taught that her husband must make all decisions, and that this was the best way to show him respect. So, when the husband makes a bad decision, wives are taught they cannot advise, correct, or contradict their husband, and that it is godly for a husband to bear all the responsibility for bad decisions.

Under this myth, it’s the husband’s fault when his ideas make the family go off the rails. Wives are powerless to stop train wrecks that hurt the family; they have no control over their own life, no voice, and no veto ability that allows them to say “Stop!”

The truth, however, is different. What the Bible teaches is mutual submission, cooperation, love, and partnership, in which both the husband and the wife have an important say in the marriage and family.

Many Christians don’t realize that Ephesians 5:22 does not  use the word “submit.” The Greek wording in this verse literally reads, “Wives, to your husbands as to the Lord.”

“Submit” only appears in verse 21, where all  believers are commanded to submit to one another (not just wives to husbands). Even here, the word submit  is not the same Greek word as the word for obey . And the Greek word kephalē (“head”) is never used to mean leader, chief person, or authority. It means “origin, beginning, or source.”[1]

In addition, there is—

Most importantly, just one verse before, the Scripture says, “Submit to one another  out of reverence for Christ” (Ephesians 5:21, NIV). And Ephesians 5:1-2 says that all followers of Jesus should love.

As one scholar put it, “Sacrificial love isn’t just for husbands (Ephesians 5:1-2, 21).”[3]  How can anyone talk about submission without mentioning verses like these, which show a two-way street?

Jesus and Peter also teach—in two passages—that their followers are not to “lord it over” one another, meaning not wielding authority over others and controlling people (Matthew 20:25 and 1 Peter 5:3).

So whom do we obey in life? We obey God!

For there is one God and one mediator between God and mankind, the man Christ Jesus… —1 Timothy 2:5 (NIV)

We are always to put God first. We are to have “no other gods before him,” as the Ten Commandments say—and that includes a husband.

Most of the time, husbands and wives support and love each other. But when one spouse does not—for example, when a husband wishes to do something that is sinful and destructive to his family and to himself—it is the other spouse’s duty (in this case, the wife’s duty) to protect herself and their children.

If a woman chooses to marry, it’s her job to be a good partner and companion, mutually following Christ together with her husband.

Throughout Scripture, we see wives advising husbands, and (in the case of danger) wives courageously taking initiative to protect the family.

In the words of a woman who was homeschooled and raised in the Mennonite culture:

I read a book that said if the woman does her part, her husband will eventually come around and everything will be OK. I also read the “love and respect” book. That taught me that if I just respected my husband more, he would love me more. It taught my husband that if I just respected him more, he would automatically love me more. These false teachings were devastating to our marriage. I believed so strongly in submission that in many ways I feel like I created a monster. Here I had done the right thing, and God’s promises didn’t happen. My husband slept with prostitutes, he went to strip clubs, he got lap dances, and he physically abused me. I was so angry with God. It’s like God said to me, “You’re angry at me; go get angry at your husband. I’m not the one who screwed up; he is the one that screwed up. Go get angry at him.” I felt that God had just had enough of it.

I moved in with my parents. My siblings were all completely on board. They thought it was completely the right thing to do to leave and divorce my husband. But it was tough on my mother… I realized I had to let my mother have her own feelings.

For people from conservative faith backgrounds, nobody expects to go through divorce. My parents do a lot of pastoral care counseling, but they are not trained counselors. The funny thing is, now that they have a daughter who is divorced, they have people coming up to them asking them how to handle situations… [One] pastor called my dad and said, “There is a person in our church, and we just don’t know what to do.” So my dad is giving them some advice on how to handle it. When your book comes out, I would like for them to be able to give it to people.

Ephesians 5:21-33 describes the responsibilities for marriage, love, and submission. For believers, there is to be mutual  submission (v. 21), with wives and husbands showing each other this submission as to the

1  Marg Mowczko, “Kephalē and ‘Male Headship’ in Paul’s Letters,” MargMowczko.com (9/18/11), accessed 08/13/19, https://margmowczko.com/kephale-and-male-headship-in-pauls-letters/. Mowczko’s article goes on to say that if kephalē (“head”) did mean leader or chief person in Eph. 5:22, why does the Apostle Paul talk about husbands sacrificing and loving their wives rather than leading them? Also of note: 1 Corinthians 11:3 is not about marriage or husbands and wives.

Where can I find The Life-Saving Divorce book?