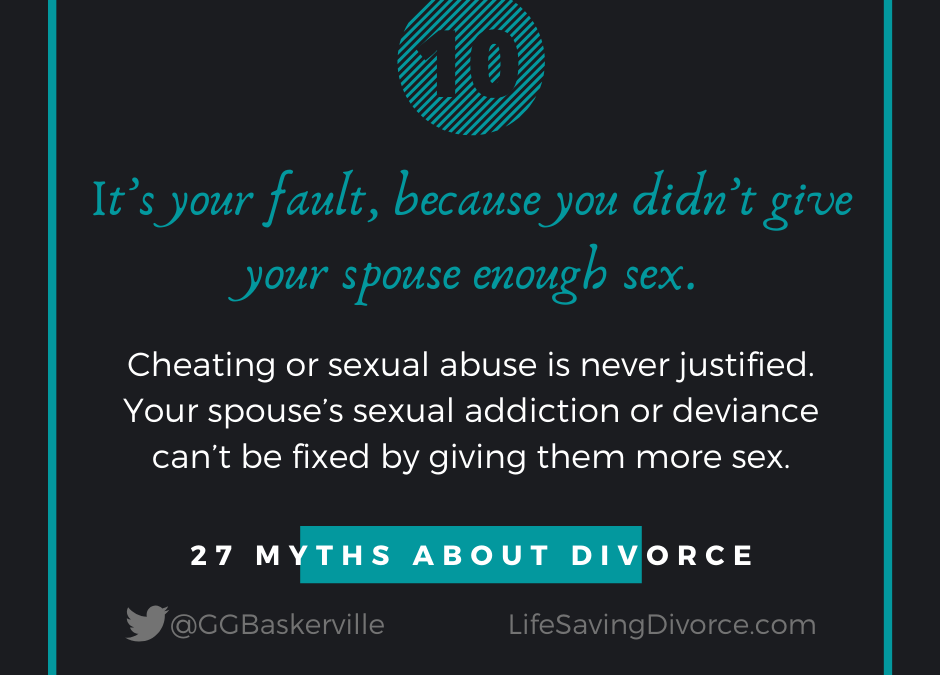 This is Myth 10 of 27 Myths about divorce that aren't likely to be true of Christians who love God and take their faith seriously. These messages make us worry if we're pleasing God. They contain little accusations that our motives aren't right. They make us second-guess ourselves when we try to get ourselves and our children to safety. Many of us have heard these messages all our lives and wanted to avoid them.  So although these myths may be true for people who are selfish or immature, they aren't true for a person who invested their heart and soul into the relationship, even when the other person didn't.  See all the myths on one page. See the next myth.

MYTH: It’s your fault, because you didn’t give your spouse enough sex.

TRUTH: Cheating or sexual abuse is never justified. Your spouse’s sexual addiction or pedophilia can’t be fixed by giving them more sex.

The truth is that you cannot cure someone else’s sex addiction or deviant sexual behavior by having more sex with them. Respected infidelity researcher Dr. Shirley Glass, in her book Not Just Friends, writes:

“Most people mistakenly think it is possible to prevent affairs
by being loving and dedicated to one’s partner.
I call this the ‘Prevention Myth,’
because there is no evidence to support it.
My experience as a marital therapist and infidelity researcher
has shown me that simply being a loving partner does not necessarily insure your marriage against affairs.”[1]

As the old saying goes (and the Bible agrees)—

There aren’t any acceptable reasons for cheating, just excuses.

Of course, there are some people who will blame you for your spouse’s cheating. Yet those same people—if Christian—would not say, “Your spouse has a right to have sex with others if you sin.” If your spouse cheats because they need to see themselves in the eyes of a new adoring love, they need to go to counseling and figure out what’s going on.

A single slip might be repaired, but it takes hard work, and the unfaithful spouse must be committed to transparency and investing in the relationship. You can’t make it happen by yourself.

If a spouse cheats, the innocent spouse can forgive; but building a trusting marriage cannot happen until the adultery stops. Anyone can forgive a single incident (in fact, many people do), but serial adulterers don’t usually stop. They cheat, then come home to a loving spouse who pays the bills, keeps the household running, puts food on the table, and makes sure the kids are cared for. Many serial adulterers don’t leave or file for divorce. Why should they? They’ve got the best of both worlds.

Many Christians want to believe that God will magically cure every child molester who acts repentant. But that is delusional thinking. To date, academic literature indicates that pedophilia doesn’t go away. The only published study that says it might was debunked.

James Cantor, a clinical psychologist at the University of Toronto who specializes in the treatment of pedophiles, says some pedophiles might think they’ve been cured when they haven’t.[2] Pedophilia is considered “a lifelong condition.” [3]

We are talking about a long-term pattern of attraction to kids, or as researchers define it: “a persistent sexual interest in prepubescent children.”[3] There are also people who have a pattern of illegal sexual activity targeting early adolescents (10-14) or late adolescents (15-19). And of course, there are people who are opportunistic and will violate any vulnerable person in their path, including children. (They may not be classed as pedophiles, but they are clearly dangerous.)

These men often confessed to something minimal, like “attraction to children.” They cried tears of repentance but continued in their sin. Some religious leaders are ill-informed and believe that attraction to children can be fixed by a sexually eager spouse. Nothing could be further from the truth. Pedophiles may have sex with adults, but their interest is in children.

To quote one child molester who also had frequent sex with his wife, “The addicted part of me sees kids as good for one thing: sexual pleasure.”[4]

These Christian wives did not realize that pedophilia never goes away. They worried about their children and other children who might be affected. They hoped and prayed and forgave. They knew something wasn’t right. They were terrified that the illegal activity was far worse than they knew, but they rarely caught their husbands doing anything suspicious. (No wife can watch her child molester husband 24 hours a day, seven days a week, even if they believe they can.)

They lived in constant fear they would be humiliated and have their reputations destroyed. They confronted their husbands and demanded answers—and got lies.

The wives I interviewed for this book had divorced and were much happier, no longer living in fear and turmoil. Some changed back to their maiden names to avoid the shame. Several remarried and now have loving husbands.

As a psychologist who has spent over 20 years working with and studying victims and sexual offenders, Dr. Anna Salter says that “many offenders report that religious people are even easier to fool than most people.”[5]

Some people of faith confuse the concept of justification with sanctification. God does save any truly repentant sinner, but he does not promise to fix people in this lifetime. Even Jesus didn’t fix everyone around him. Judas was with Jesus constantly for three years and still betrayed him. If Jesus “failed” to fix Judas, why do we think we will succeed?

Footnotes:
1. Shirley P. Glass, Not “Just Friends,” (New York: Free Press, 2003), 2. This book is also excellent on how to rebuild a marriage after an affair.

2. Justin Lehmiller, “Pedophiles Can’t Be ‘Cured’ and It’s Dangerous to Suggest They Can,” Vice (1/25/19,) accessed 8/20/19, https://www.vice.com/en_us/article/mbzj5q/pedophiles-cant-be-curedand-its-dangerous-to-suggest-they-can.

4. This quote was from a forensic psychological evaluation I was only allowed to see under condition of anonymity.