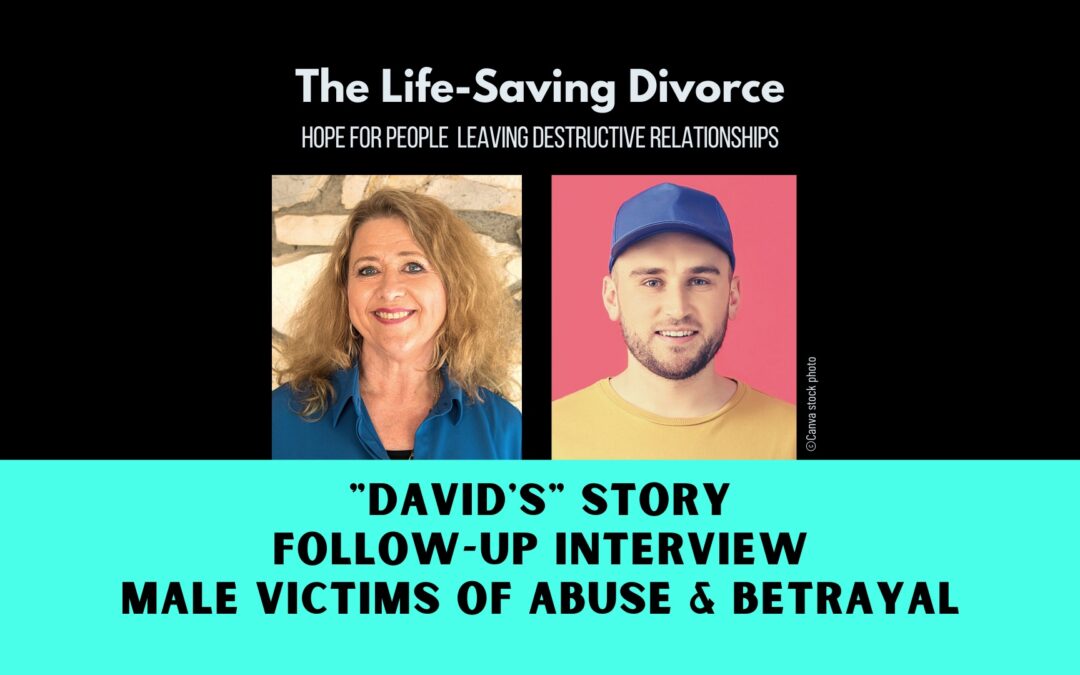 Men can be victims of chronic abuse, betrayal, and neglect too. In 2019, I interviewed David for my book The Life-Saving Divorce.

His story was powerful, and it changed the way I saw men and martial abuse. At the time, he was dealing with some legal and parenting issues, and had just remarried.

In this interview, he tells the story of his first marriage and gives us an update of his life today. David was brought up in a high-achieving conservative Christian homeschooling family, and attended a complementarian church that was part of the Sovereign Grace group of churches on the East Coast.

He was taught the "I Kissed Dating Goodbye" purity culture formula for courtship and marriage.

David was a good kid who had a great relationship with his parents and followed all the rules.

In this interview he talks about the dangers of being brought up complementarian, and never taught what to do when you’ve gone several stages down the courtship path and notice red flags in your fiancé. He discusses the outward signs of holiness (church attendance, Bible study, etc.) that were supposed to guarantee a good marriage but in reality distract young people from focusing on relationships with integrity, intimacy, respect, friendship, and authenticity.

These messages combined to pressure David to marry a destructive marriage to a woman who was manipulative and selfish. After many years and three children, she eventually drove him to despair and depression, falsely accusing him of a felony, resulting in his arrest.

He talks about trauma bonds, and the secular therapists who saved his life and helped him see the truth. He also discusses his strong faith in God today.

"John" tells his story about being a male victim of abuse at the hands of his wife. The Interviewer is author Gretchen Baskerville, whose book "The Life-Saving Divorce" has a chapter devoted to telling the stories of men who are victims of abusive or serially unfaithful wives. 00:55 - Men are more likely to stay silent, and less likely to be believed.

03:00 - How his wife cut him off from friends and isolated him from those close to him

04:25 - Her opposition to attending a colleague's wedding

05:20 - Her demeaning behavior, insults to his professional career and life as a farmer

06:30 - Her claims to be superior to him and demands for apologies.

07:20 - Provoking him into arguments. Criticized him for being English.

07:50 - Friends noticed and commented on the disrespect

08:30 - Undermined his prior promises to his foster daughter

10:40 - She would start argument and would block the front door, and coerce him to stay in the house (He couldn't move her physically for fear of being accused of being physically violent.)

12:15 - Feeling trapped. She said she could do anything she wanted to me.

12:40 - Sleep deprivation, as a common form of torture

13:00 - She never accepted responsibility over her own behavior. He felt trapped.

14:40 - How did you finally understand that you were an abuse victim? How did you get in contact with a domestic violence advocate? Duluth Wheel adapted for male victims.

15:45 - DARVO - My wife wanted to portray me as the abuser (reversing victim and offender). She said she could do anything to me she liked.

16:30 - He found the examples, definitions, and men's stories on the ManKind Initiative website: https://www.mankind.org.uk/help-for-v...

18:00 - Churches don't always believe him. No church leader has ever asked for his evidence.

18:30 - Advocating by displaying a placard in front of a church.

19:15 - Christian men are sometimes not believed. One man's wife was convicted and imprisoned for her behavior. https://www.telegraph.co.uk/men/think...

19:50 - His wife made allegations against him. The police pulled him over. He was able to prove beyond any doubt that her allegations were false. Finally, the police had to let him go.

22:20 - He had filed a complaint against her prior to this event. But the police laughed at him.

22:40 - He believes that his wife filed a preemptive charge.

23:15 - In retrospect, he wished he's been charged, and his journals would have been made public in court.

23:45 - One senior police executive has since apologized to him. John now works with the police in the area of advocacy.

25:00 - Dating again after divorce. He went on a few dates and realized he was not the problem. Most women weren't abusive. He regained his confidence.

25:50 - He wanted his fiance to know about his past. She looked at the evidence and believed him. Today they are happily married.

26:00 - Message to men: Call the police if you are in danger. Seek out an abuse awareness organization that has men's stories on their websites. ManKind.org.uk. Men stay because they are afraid of losing contact with their children and because they hope they can protect their children from abuse. The authorities are gradually improving on this topic.