by gbaskerville | Nov 16, 2020 | Divorce Bible Verses, Focus on the Family, For Pastors 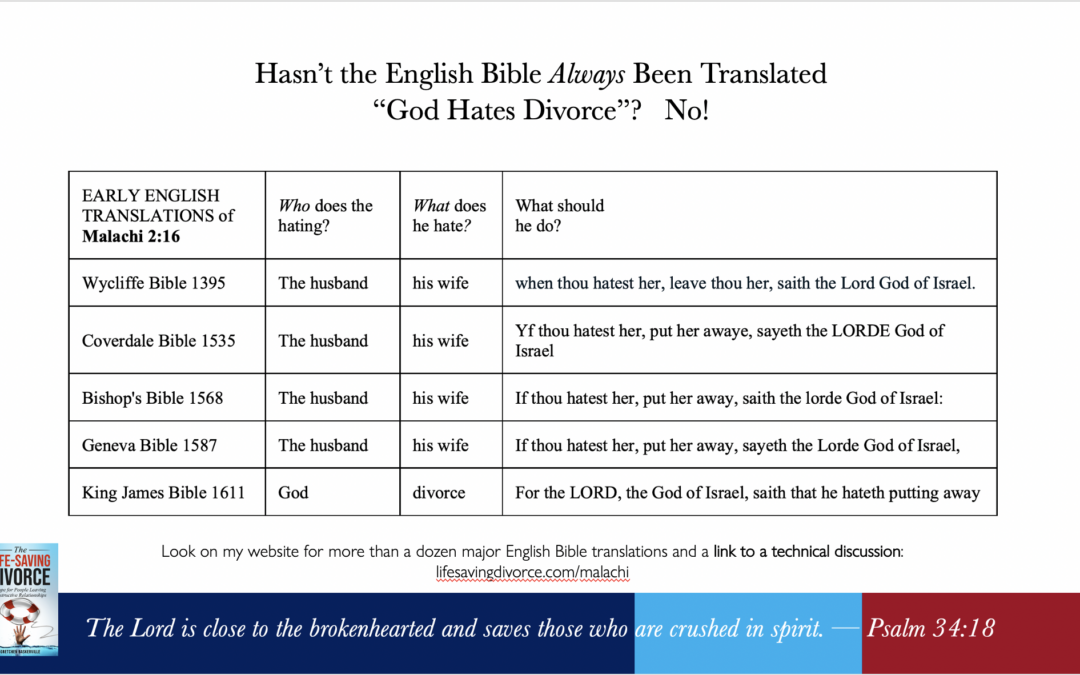 This comparison chart (below) of 18 translations of Malachi 2:16 from before the time of Christ (the Septuagint) to today shows something remarkable.

In the first 2,000 years of Bible translation prior to the King James Version (AV), Malachi 2:16 was NEVER translated as "God hates divorce" or "I hate divorce."

The Bibles of the previous 2,000 years—the Septuagint, Aramaic, Latin Vulgate, Masoretic Text, Wycliffe Bible, Coverdale Bible, Great Bible, Bishop's Bible, and Geneva Bible—didn't translate Malachi 2:16 that way. The KJV interpretation is not the traditional view. It's far outside the norm. It's a radical departure.

Below the chart you'll find links to two conservative scholars discussing the Hebrew, and the history of translation, from 100 years before Jesus to today.

Dr. C. Jack Collins of Covenant Theological Seminary suggests (see his conclusions below, and link) that wording closer to the ESV is preferable.

“For the man who does not love his wife but divorces her, says the Lord, the God of Israel,... — ESV

He knows that people will object and say this translation weakens the meaning of the verse, but he says this (see link below):

“weakens” Biblical morality: rather, careful attention to the syntax and context

helps us to see just how the prophet is urging the people to ethical faithfulness. 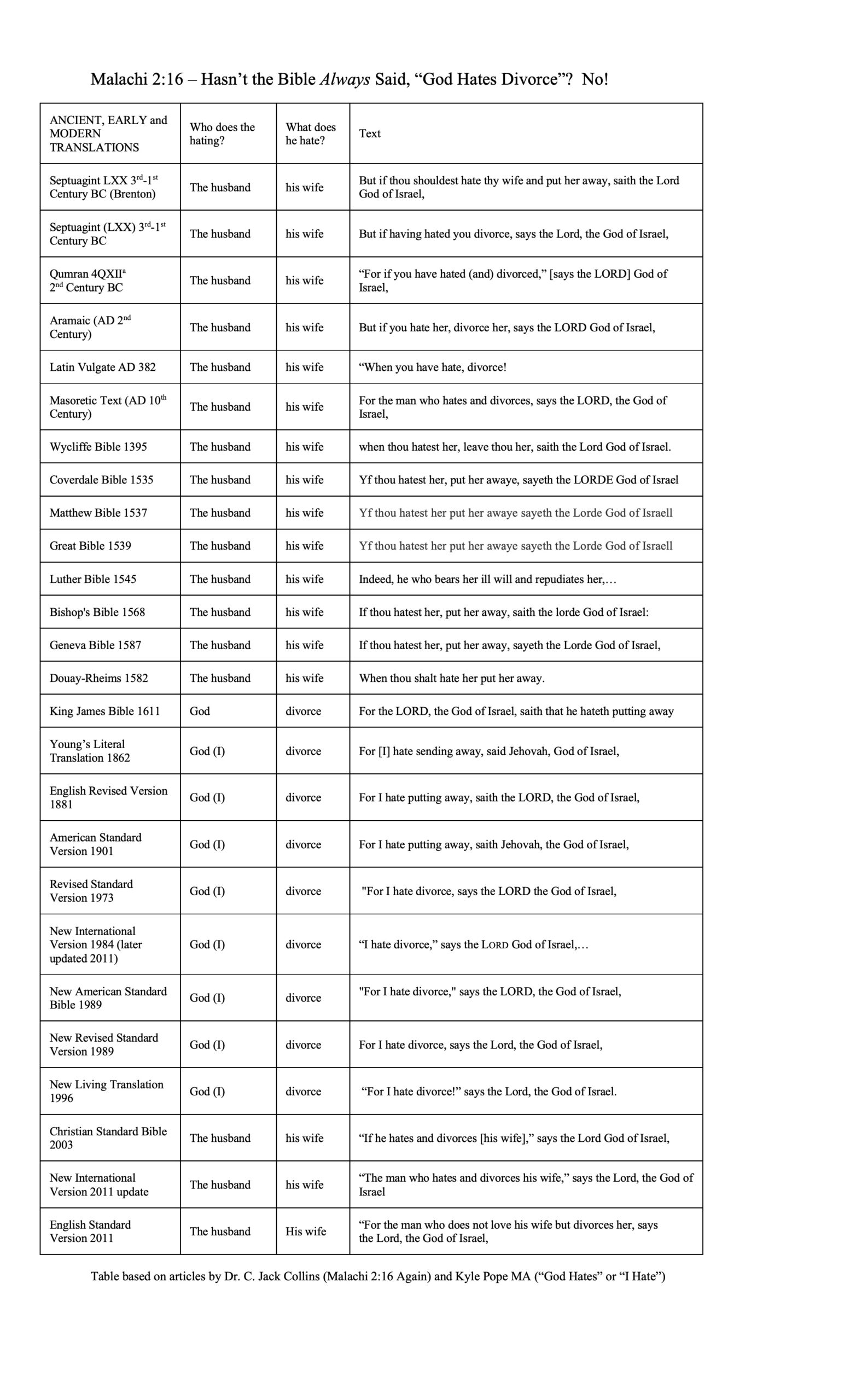 2400 Years of Translating Malachi 2:16:  How Ancient, Early and Modern English Bibles Interpret It

The chart above shows that the interpretation "God hates divorce" is not the traditional view. When you look at 2400 years of Bible translations, you see that it is a very odd wording.

The Hebrew in this passage says:

if he hates (verb) divorce (verb)

The word "divorce " is a verb not a noun. No one is hating divorce (noun). And God is not speaking about himself, because the next phrase is that "he" (the person doing the hating) is covering his clothing with violence. So it cannot be talking about God. Plus God speaks in the first person in Malachi. He uses "I" when he speaks to the people, not "he," followed by the phrase "says the Lord" (sixteen times) in Malachi. So "God hates divorce" is not the time-tested traditional translation even though people may claim it is.

Here are the 4 main ways the major English Bibles interpreted Malachi 2:16 over the past 2400 years

1) “If you hate your wife, divorce her...” - Wycliffe, Coverdale, Matthew, The Great Bible, Bishop's Bible, Geneva Bible, some Septuagint, etc.

3) “God hates divorce...”  KJV (AV), even though the word in Hebrew is he, not God. Also, despite the online Hebrew interlinear Bibles, the Hebrew language doesn't have upper- and lowercase letters. So the capitalized "H" in he, does not really exist.

From Collins's abstract: "Most English Bibles, beginning with the AV , render Malachi 2:16 in such a way that God is saying that he hates divorce – either in the first person (“I hate divorce,” NASB, NIV, NRSV) or in the third person (“he [= the LORD] hates divorce,” AV). Most acknowledge that this is extremely difficult to get from the Masoretic Text, and offer some set of corrections (re-vocalizing, emending the consonants)"

I believe the discussion here shows the following:

1. The translation of this verse found in the AV (and most English Bibles since then), with God hating divorce, represents a departure from the translation tradition of the previous centuries.

2. The rendering of the ESV, which has a Judean man “hating” his wife and divorcing her, does the best job of handling the details of the Masoretic Text, with no corrections. It also enables us to see how this fits into the context of profaning the calling of the people of God .

3. This way of reading Malachi 2:16 allows us to see how the verse fits into the overall promotion of covenant fidelity as the ideal of marriage, an ideal for which the faithful among the people of God – whether in ancient Israel or in the Christian Church today – will seek all the resources of grace, of forgiveness, of fellowship with the saints, and of the Holy Spirit’s enabling power.

Summary: "Divorce is hard, horrible, and heartbreaking, but we should stop saying that God hates divorce, as this is misquoting and misrepresenting scripture. Moreover, pronouncing that “God hates divorce” brings only hurt, confusion, and feelings of condemnation to Christians who are divorced or contemplating divorce. This pronouncement does nothing to help the church’s mission of bringing healing and hope through the gospel. Furthermore, we simply must stop using Malachi 2:16 to coerce or guilt a wronged or abused spouse to remain in a harmful marriage."

This chart shows that the interpretation "God hates divorce" is not the traditional view. When you look at 2100 years of Bible translations, you see that it is a very odd view.

Are you going through a life-saving divorce and need support?  I’d like to invite you to my private Facebook group, "Life-Saving Divorce for Separated or Divorced Christians." This is a group for women and men of faith who have walked this path, or are considering it. Allies and people helpers are also welcome. Just click the link and ANSWER the 3 QUESTIONS.