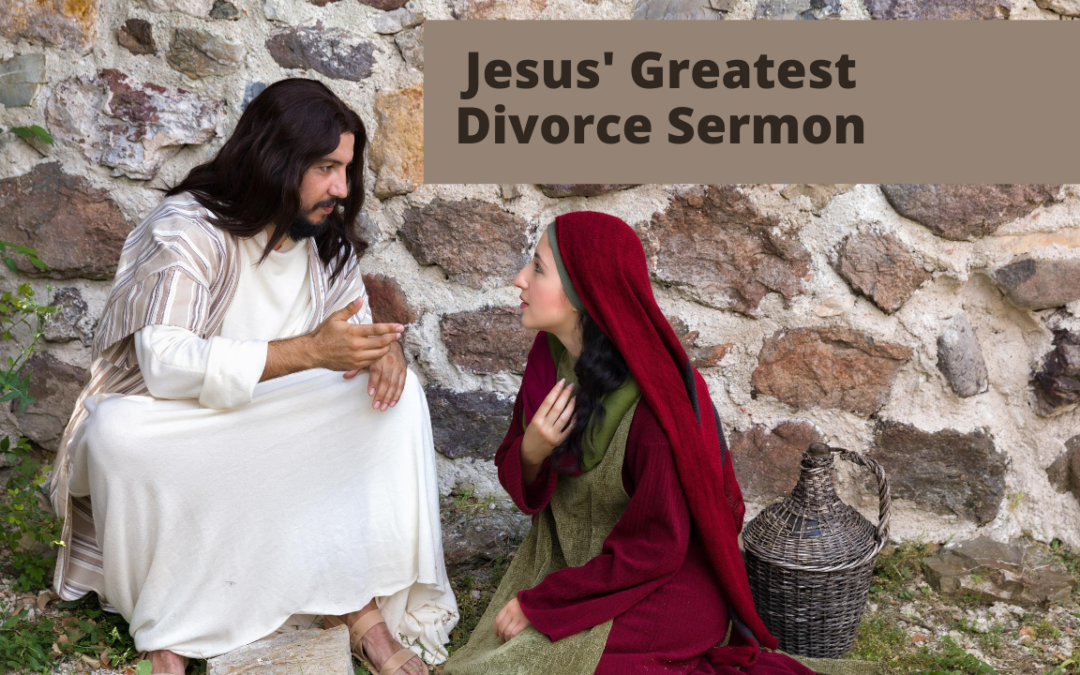 If you're new to my blog, read this first. I've attended church since I was born. I'm a committed Christian who started leading Christian divorce recovery groups in Evangelical churches in 1998. I write about "life-saving divorces," those divorces that are for very serious reasons. "Life-saving divorces" make up nearly half of divorces in the United States. Read the definition HERE.  If you want to know why you should should have a nuanced view of divorce, see THIS. And here is the biblical rationale for condoning life-saving divorces. Although I believe many divorces are treacherous and/or sinful, I believe a loving God gave divorce to protect the lives of his beloved people, who are made in his image, by allowing them to get out of destructive marriages.

Jesus said plenty of things about divorce, he said that God intended marriage to be loving and lifelong, but he also said that divorce had been allowed due to the hardness of people's hearts. In other words, some people are just too mean and uncaring to be a good, safe marriage partner.

So let’s look at Luke 13:10-16. This is the story of Jesus healing a disabled woman on the Sabbath. You may have heard it before, but this time, focus on the areas I have underlined.

"Now [Jesus] was teaching in one of the synagogues on the Sabbath. And behold, there was a woman who had had a disabling spirit for eighteen years. She was bent over and could not fully straighten herself. When Jesus saw her, he called her over and said to her, “Woman, you are freed from your disability.” And he laid his hands on her, and immediately she was made straight, and she glorified God. But the ruler of the synagogue, indignant because Jesus had healed on the Sabbath, said to the people, “There are six days in which work ought to be done. Come on those days and be healed, and not on the Sabbath day.” Then the Lord answered him, “You hypocrites! Does not each of you on the Sabbath untie his ox or his donkey from the manger and lead it away to water it? And ought not this woman, a daughter of Abraham whom Satan bound for eighteen years, be loosed from this bond on the Sabbath day?” —Luke 13:10-16 (ESV)

Watch the video, or continue reading below.

Compassion for a Woman in Bondage

Jesus had noticed the woman who was trapped by a disabling spirit. It was a hostile spirit, one that wanted to control her so she would live a life of infirmity. That was the spirit’s goal. Jesus said he came to set the captives free—free from the bonds of torment. Jesus was willing to stand up to the leaders of his day to rescue people and release them from bondage. Jesus defied the religious leader’s attempt to control him, and he healed the woman on the Sabbath, an act that leader considered a violation of the Ten Commandments. But Jesus said it was good and right to release her from bondage.

Satan's Goal Is to Bind and Torment People

Look closely at this story. The woman in this passage had been disabled for many years. The Bible says she lived a miserable life brought on by an evil spirit that wanted her to suffer. Evidently the synagogue leader wasn’t all that concerned about her suffering. Jesus said Satan had bound her.  Then Jesus gave the woman a choice. He called her to come to him. She knew the synagogue leader would be angry. She did it anyway. And Jesus set her free.

She straightened up and glorified God!  Setting people free brings glory to God. Ignoring suffering and keeping people in bondage brings glory… to Satan. The ruler of the synagogue was indifferent to her suffering. He was a strict legalist and was angry at Jesus. He said Jesus should have waited, that the people who wanted healing shouldn’t make a big deal about it. He thought Jesus should have healed the woman on another day of the week.

Jesus Deliberately Angered the Religious Leader By Setting Her Free

Of course, Jesus could have healed her on another day, but he deliberately did it on the Sabbath. Jesus was trying to make a point: Rescuing people comes ahead of legalism.

Then it was Jesus’ turn to be angry at the ruler of the synagogue and his allies— “You hypocrites! Doesn’t each of you on the Sabbath untie your ox or donkey from the stall and lead it out to give it water? And ought not this woman, a daughter of Abraham whom Satan bound for eighteen years, be loosed from this bond on the Sabbath day?” —Luke 13:15-16 (NIV)

Jesus Saw Her as a Person of Worth

That leader did not recognize the woman as a person of worth. He didn’t care about her suffering. He thought she should just endure it. He didn’t even treat her as well as an animal. But Jesus saw her as valuable.  Jesus sees you as valuable. You were made in the image of God. You are precious, and you should not be trapped in an unsafe marriage.

Does Jesus Love Your Marital Status More than He Loves You?

Let me ask you something: Does Jesus love your marital status more than he loves you and your kids?  Are you being tormented by a hardhearted spouse who has no conscience, who doesn't care how they treat you? You, like that woman can make a choice, you can defy other people’s spiritual control. Jesus is calling. You can walk over to Jesus, and be set free—and bring Glory to God.

If you're in bondage and want to reach to Jesus for freedom, you can do so. Also, for more on this read Chapter 5 in my book The Life-Saving Divorce.

Please subscribe to my You Tube channel. I’d recommend you watch:

• Video “What are life-saving divorces?”  or the blog post.

• Video “Does the Bible say that God hates divorce?” or the blog post.

• If you have children and you worry what divorce will do to them, you’ll find encouragement in the video: “5 Studies That Say Most Kids Turn out Fine after Divorce.”  or the blog post. Nearly 8 in 10 kids turn out fine after divorce, with no longterm serious emotional, psychological, or social problems.

For a video explanation of Malachi 2:16, showing better ways to translate that verse from Hebrew into English, see this video.

For one woman's story about adultery and prayer and how God finally opened her eyes to leave, see this blog post.

For another woman's story of escaping an adulterous marriage to a narcissist, read pages 176-177, or read this blog post Turning Point #1

For first-person stories and more on the 27 myths of divorce, read Chapter 3 in The Life-Saving Divorce. As an Amazon Associate I earn from qualifying purchases.