by gbaskerville | Apr 1, 2021 | Christians and Divorce, Divorce and Children, Focus on the Family, For Pastors 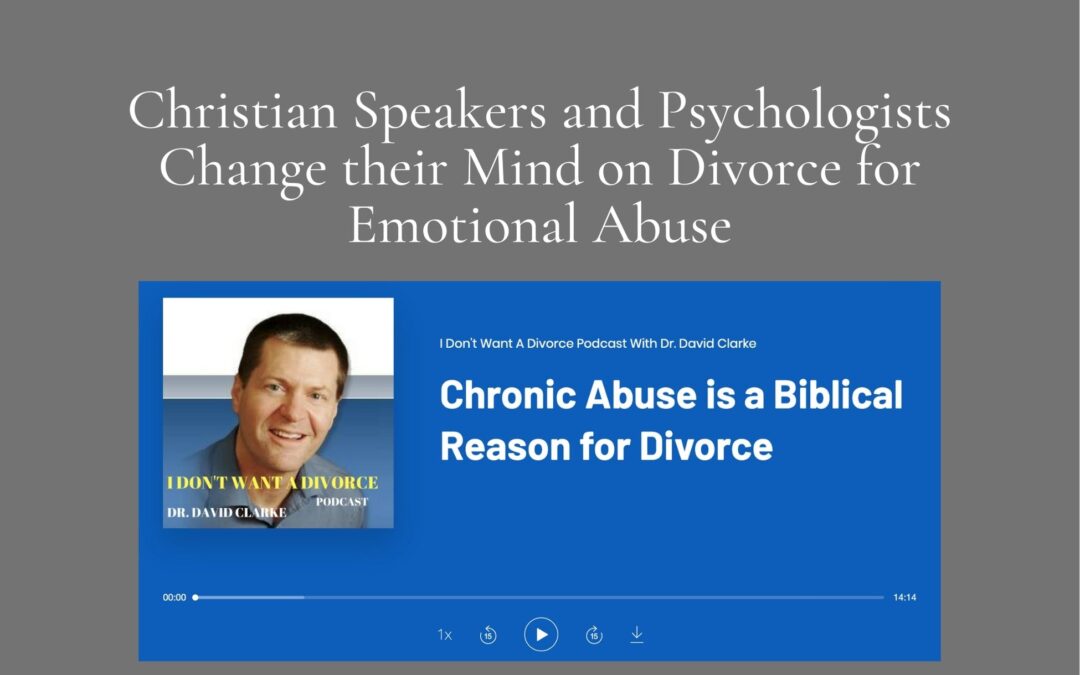 Some Christian authors and speakers now accept physical and emotional abuse as biblical grounds for divorce. We need to honor their willingness to publicly change their view.

David E. Clarke Ph.D. Retracts His Prior View of No Divorce for Abuse

Just two days ago, March 30, 2021, Dr. David E. Clarke posted a new podcast and video explaining that he has changed his mind about abuse. He now says physical and emotional abuse ARE valid grounds for divorce. He also states it in writing, and talks about his earlier view that divorce was only for unrepentant adultery and abandonment. Listen to minutes: 1:20-3:00.

I truly applaud Clarke’s change and this public declaration. Clarke says he'll get criticism, but he doesn't care. That's courage, and I honor that. It may affect his income, he probably won't get as many speaking gigs (although, frankly, maybe he will get more!). His books may not be recommended anymore. He may not be featured as a broadcast guest anymore. So he's putting his money where his mouth is. He's earned my respect.

I hope we see this change of mind for many other Christian leaders. I'm proud that he is one of the first to do this.

Clarke says he retracted his former view. Here's a few sentences from the public You Tube transcript from the video version:

"Are you ready for some controversial teaching on divorce? Well I hope so because that's what you're going to get in this podcast today. ....

Today's edgy topic: chronic abuse is a biblical reason for divorce. I'm not just going to tell you that; i'm going to show you why it's true.
Now I have a confession to make right up front. Until recently my position was that there were only two biblical reasons for divorce, unrepentant adultery as Jesus teaches, and abandonment by a non-Christian spouse which Paul teaches in 1 Corinthians. Now I believe that a wife (still do) has a biblical right to physically separate from an abusive husband. I wrote a book called Enough is Enough how to leave an abusive relationship with an escape plan for the abused spouse.
But I did not think that ongoing unrepentant physical and or emotional abuse was a biblical reason to divorce. I do now. I do believe after careful study that the Bible does teach that chronic abuse is a reason for divorce, certainly for separation no question about that but now i believe it's one for divorce too. I don't recommend divorce, but you certainly are free to divorce if that's your situation. God just has to release you from the marriage. Now i did not come to this conclusion easily or quickly. It took me years it came after careful study of the Bible, consulting biblical scholars I trust, and a lot of prayers seeking God's guidance because it's an important area the work that I do with couples and the sacredness of marriage i want to make sure it's accurate. So on this podcast I present the biblical case for chronic abuse as the third reason for divorce..."
https://youtu.be/Wclvy6uSXc0  March 30, 2021

Now for the next step:
David E. Clark Ph.D. needs to remove his earlier destructive messages

David E. Clarke's earlier statements, just in the past 3 years, were the opposite. He needs to renounce and retract these:

—Clarke should demand that Focus on the Family remove his 2018 article, "Do You Really Want a Divorce?"

His article "Do You Really Want a Divorce?" suggests Jesus is against all divorce, never mentions that Jesus condoned it in Matt. 19:9 or that the apostle Paul condoned it in 1 Corinthians 7:15, or any other verse allowing divorce. #focusonthefamily

And he suggests that divorce is universally destructive to kids, which major family sociologists refute, including Dr. Judith Wallerstein, Dr. Paul Amato, Dr. Andrew Cherlin, Dr. Sara McLanahan, Dr. E. Mavis Hetherington, and Dr. Linda Waite. These are all top researchers quoted by Focus on the Family in their online articles.

In this video Clarke says that an abuse victims who claim to want a divorce to protect their children are believing a “Lie, Lie, Lie.” (00:15)

If he truly believes that divorce is worse than abuse for children, then he’s ignoring decades of research. And to make it worse, he has been misleading many abused spouses/parents. Family sociologists have known for 30 years that being brought up in an abusive high-conflict home is worse for children’s wellbeing on average than divorce. Here’s a blog post with quotes from the top researchers. And here is my summary of the Dr. Paul Amato study that shows that abusive high-conflict homes are worse for kids than divorce.