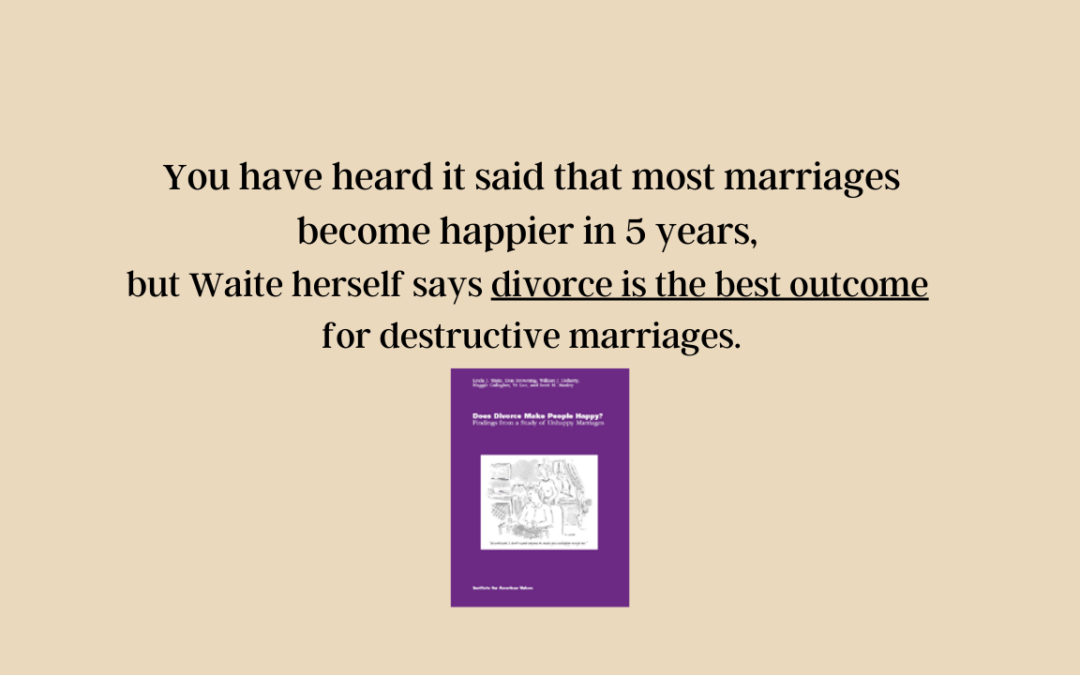 BELOW: Seven quotes from Dr. Waite — refuting those misunderstandings of her findings.

But that's wrong!
The Waite study actually found something quite different: She found that people in destructive marriages are better off by divorcing, and that 81% of those individuals who remarried during the study were happier in the next marriage!
The main quote you'll hear from Dr. Linda Waite's study is this: "Almost two-thirds of unhappy spouses who stuck with the marriage forged happy marriages down the road" (emphasis mine). And this quote: "Two out of three unhappily married adults who avoided divorce or separation ended up happily married five years later."
But that means that one-in-three did not ever become happy.  In the last sentence of the Waite study (2002), Dr. Waite says that divorce or separation are likely the best outcome for a destructive marriage:
---

So, we can say people who escaped unhappy violent marriages are often happier. They are greatly relieved to get to safety.

Here Waite says that divorce and remarriage reduces the likelihood of domestic violence.

She's saying, in general, divorce does not make people happy. But if a person is in a violent home, divorce will likely will reduce the violence and increase their happiness.

Waite is saying that when the problems were illness, lost jobs, financial stress, and kids with behavior problems, those marriages were the types that improved. But when the cause of marital unhappiness was something in the character and behavior of one spouse (for example, drunkenness, infidelity, violence), it did not improve.

Waite lists one story of a serious relationship problem that improved: a husband who stopped drinking after two years. (Two years? This is somewhat humorous. All wives of drug and alcohol addicts wish they could be so fortunate!)

Quote 8: Waite   This quote is from Waite's book A Case for Marriage. Waite agrees with researchers Paul Amato and Alan Booth who concluded that although divorce is usually negative for children, it is beneficial for children in 3 in 10 cases:

“What proportion of divorces are preceded by a long period of overt interparental conflict, and hence, are beneficial to children?” asked Amato and Booth. “From our own data we estimate that less than a third of parental divorces involve highly conflicted marriages.” Just 30 percent of divorcing spouses reported more than two serious quarrels in the past month, and less than a quarter said they disagreed “often” or “very often” with their spouses. This bears repeating: Less than a third of divorces are ending angry high-conflict marriages. —Waite, Linda J.; Maggie Gallagher. The Case for Marriage (p. 147). Crown. Kindle Edition.

Quote 9: Hawkins and Booth   Another study was done three years later by another team of researchers using the SAME data. They didn't just look at five years, they looked at unhappy marriages that had gone on for at least twelve years. They used the same national survey Dr. Waite did, but they did a more thorough job and they measured more than just "happiness," they measured three more factors, including the person's overall health.  They found that—